What Makes a Canyon Grand? And How Deep is Deep? Exploring Kings Canyon, One of the Deepest Canyons in North America 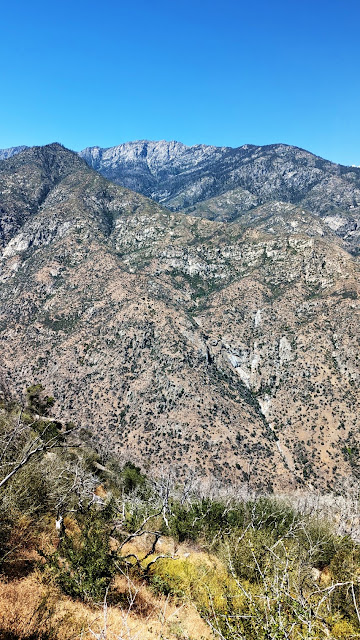 Well, let's jump right into it. The picture above is Spanish Peak in the Sierra Nevada, which looms above the canyon of the Kings River. The peak tops out at 10,051 feet (3,064 meters). The drainage on the left is Rough Creek, and it enters the Kings River at an elevation of about 1,800 feet. The drainage on the right is Deer Creek, and it enters the Kings at about 2,300 feet. This seems to indicate a depth of Kings Canyon as between 8,200 and 7,700 feet, depending on where you choose to define it. 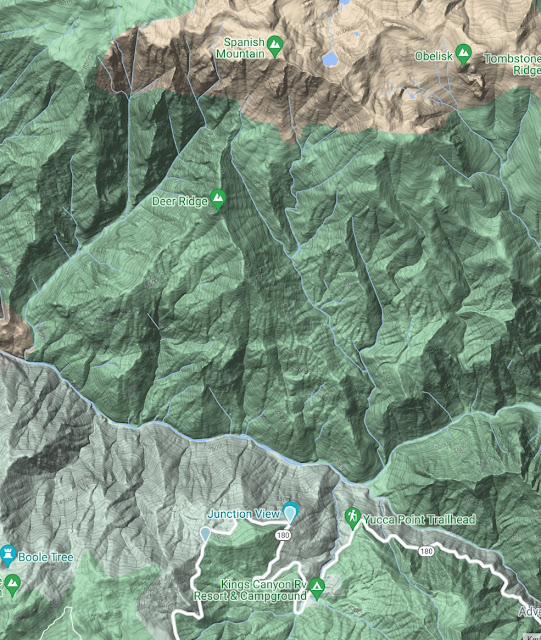 So, the designation of "deepest canyon" seems to be somewhat in conflict. The argument can be muddied by pointing out the canyons are asymmetric, and that the other sides of the canyons are less dramatic in height. There is some truth to this, as the south slope at Kings Canyon tops out at just over 7,000 feet, meaning that the canyon is only a little over 5,000 feet deep. But the problem is similar for Hells Canyon, where the ridges across the river are just over 5,000 feet above the river.

Which is deepest? I don't know, and I don't particularly care. If Idaho needs to have the 'deepest' or 'biggest' of something, they can have it. After all California has lots of superlatives, like biggest living things, tallest trees, oldest living things, tallest mountain in the lower 48, and so on. I've not been to Hells Canyon. But I have been to Kings Canyon, and what I do know is that it is one of the most spectacular places on Earth. 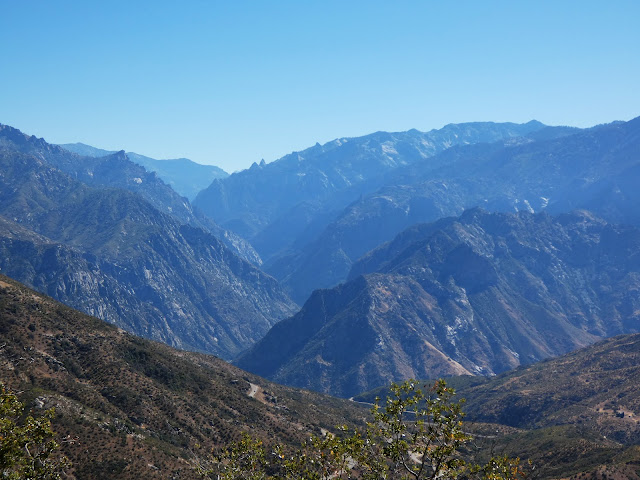 The upper reaches of Kings Canyon include some of the highest and most rugged parts of the Sierra Nevada crest. Parts of the Middle Fork are too precipitous for roads or even foot trails. These parts of the canyon are protected as Kings Canyon National Park, established in 1940. a full fifty years after the designation of Yosemite as a national park. One of the most pleasant parts of the canyon, Cedar Grove, was left out of the park because of plans to inundate the valley under the waters of a reservoir. Better angels prevailed and Cedar Grove was added to the park in 1965. The downstream (and deepest) part of the canyon is administered by the U.S. Forest Service. 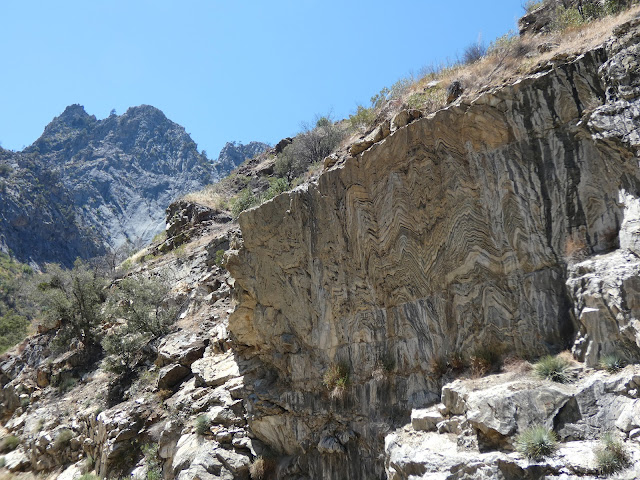 As rugged as the canyon is, a paved highway (Highway 180) provides access to Cedar Grove, and it is pretty incredible to drive. I marvel at the engineering decisions that went into the design of the present-day highway. The terrain is literally impassable, but someone decided where the road would go, and laborers blasted away at the rocks. Most of the construction crews were prisoners. The road was planned as early as 1905, and construction took place during the 1920s and 1930s. At one time it was envisioned that the road would continue up and over Kearsarge Pass to connect with Onion Valley. Thankfully that plan didn't come to fruition. 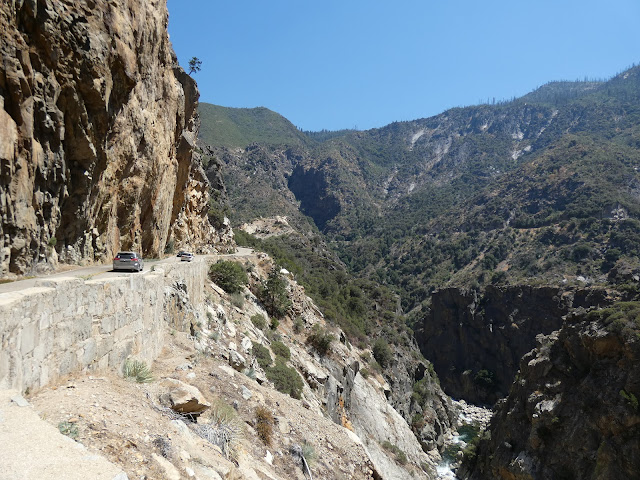 The highway passes through some astounding geology. Granitic rocks may make up most of the Sierra Nevada, but Kings Canyon contains exposures of some large metamorphic roof pendants of Paleozoic and Mesozoic age. A stunning cliff of gray marble forms one wall of the South Fork, and contains a number of caverns, including the developed tourist attraction of Boyden Cavern. Quartzite, slate and spectacularly folded calc-silicate rocks are also exposed along the highway. 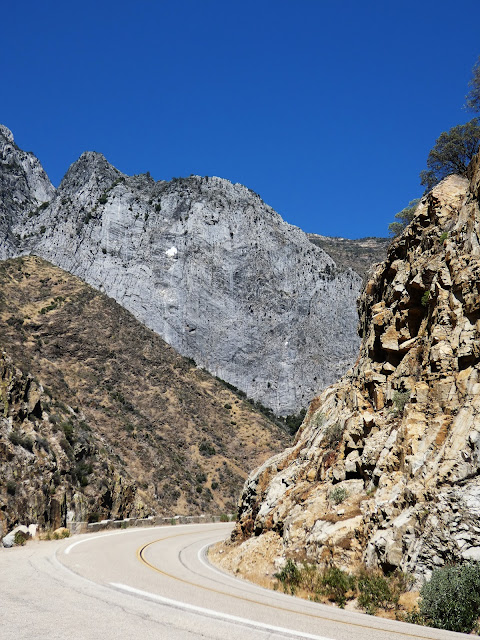 The viewpoints along the highway just north of Grant Grove are simply beyond compare, giving a full-on perspective of the deepest part of the gorge as well as vistas towards the high country near the Sierra Crest. And...it is a LOT less crowded than Yosemite Valley! 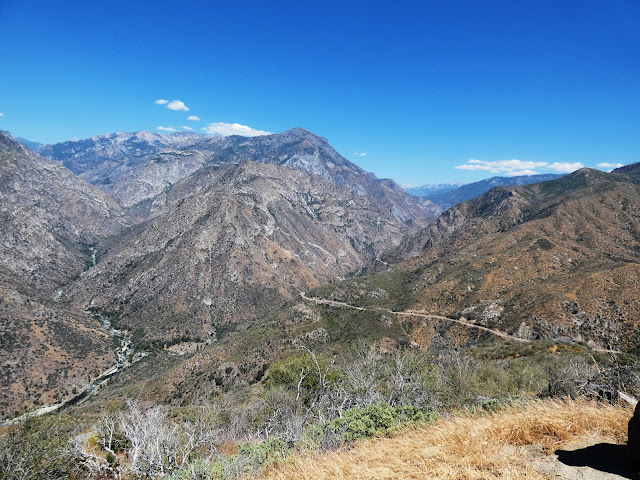 In case you were wondering about other deep canyons, the Sierra Nevada hosts numerous awesome gorges. The Grand Canyon of the Tuolumne River is a roadless part of Yosemite National Park which in places is fully as deep as the Grand Canyon at 5,000 feet. I would love to offer pictures, but I haven't traveled through it in many decades. Another canyon, that of the Kern River in Sequoia National Park, is 7,000 feet deep in places. Yosemite Valley is a mere 3,000 feet deep, but with those vertical walls it truly stands apart as one of the unique places of the planet.

Farther afield, Mexico has the Barranca del Cobre (Chihuahua, Mexico). The canyon system has six major gorges, of which Urique Canyon is the deepest and largest, measuring at one point 6,236 feet deep.

The deepest canyon I know of in Polynesia is Waimea Canyon on the Hawaiian Island of Kauai. It is sometimes called the "Grand Canyon of the Pacific", but I think it stands pretty well by itself without having to compare it to others. It is a favorite destination of mine when I visit the islands. It is nearly 3,000 feet deep in places.

In South America, the deepest canyon I could find info on was Colca Canyon in Peru. At one point it is 13,600 feet deep.

The ultimate canyons would pretty much have to be where the mountains are the highest, so the deepest canyon in the world is found in the Himalayas. Some of the canyons that pass through the range (the Kali Gandaki or Yarlung Tsangpo Gorges for example) are said to reach depths of 17,000-19,000 feet.

And finally, since it was part of the title, there is the Grand Canyon of Arizona. It's not the deepest canyon overall, but it does maintain a consistent depth of over 5,000 feet for several hundred miles, and there is no canyon like it in the world. I can't even describe how spectacular it is in a few sentences, so I offer the blog series I wrote after a memorable river trip in 2013 in which I almost died, twice, but also had the greatest adventure of my life. Check out Into the Great Unknown. 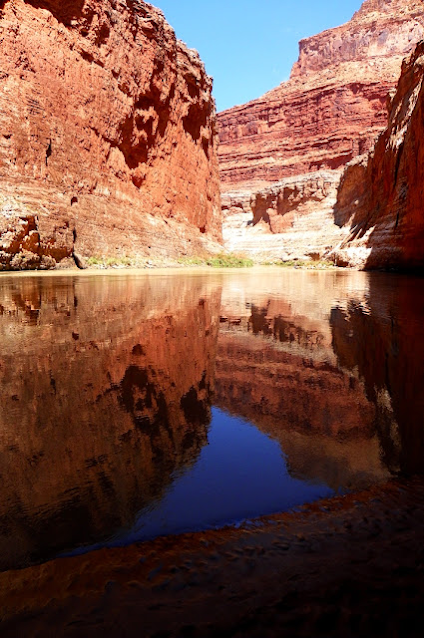 Great article, I hadn’t heard of some of those canyons and always like finding new places to learn about. Thanks!

So how does a geologist define the difference between a canyon and a mere valley?

A canyon is usually considered a deep gorge cut primarily by rivers and mass wasting. All canyons are valleys, but valleys are often described as low areas between mountain ranges and have a variety of origins, often by faulting and tectonic processes. Thus, the Owens Valley, the Rio Grande Rift Valley, the Central Valley of California. All of these have rivers, but they were formed by tectonic processes. The two terms obviously overlap in meaning, but canyons are more specifically a river or glacier-eroded feature as I understand it.