Fan of Columnar Jointing? Here's a Real Gem for You in the Sierra Nevada, and it's Not Devil's Postpile 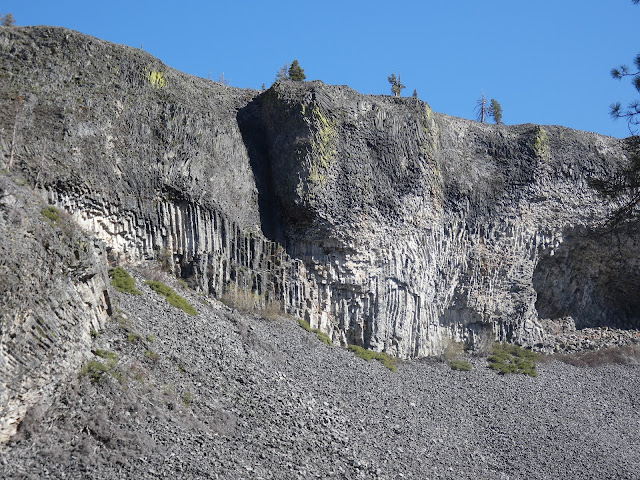 Tucked away in a small corner of an unheralded canyon of the Sierra Nevada is a real gem of a geological locality. It is a marvelous example of columnar jointing that has been modified by glacial scouring, and it's NOT called Devil's Postpile. Welcome to the Columns of the Giants. 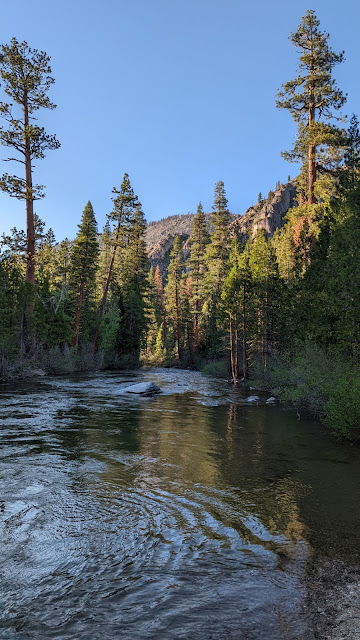 The Stanislaus River doesn't quite have the panache of the Merced River, which flows through Yosemite Valley, or the Tuolumne River, the architect of Hetch Hetchy Valley. It's not protected as a national park like Kings Canyon. It had glaciers during the ice ages, but they didn't have the volumes of ice necessary to carve stunningly deep gorges like the previously mentioned river valleys. But it does have a grandeur all its own. 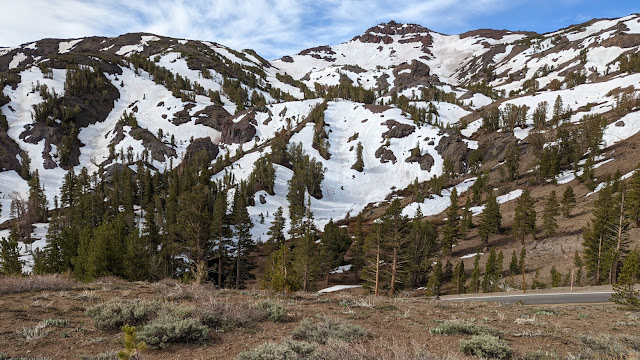 The headwaters of the Stanislaus expose rocks that are quite distinct from those of the other more famous rivers. The rocks have a darker aspect, due to being composed of relatively young volcanic rocks, rather than the granite that makes up three-quarters of the Sierra Nevada. Highway 108 crosses one of the uppermost tributaries at Sonora Pass (9,624 feet/2,933 meters), and travelers can get a spectacular view of these former volcanoes that were active about 10 million years ago. They erupted onto a muted landscape of eroded granitic rocks. Some of the eruptions produced flows that traveled more than fifty miles downstream through the canyons of the Ancestral Stanislaus River. Later erosion acting on these flows produced the famous Stanislaus Table Mountain in the vicinity of the Gold Rush Towns of Jamestown and Sonora. 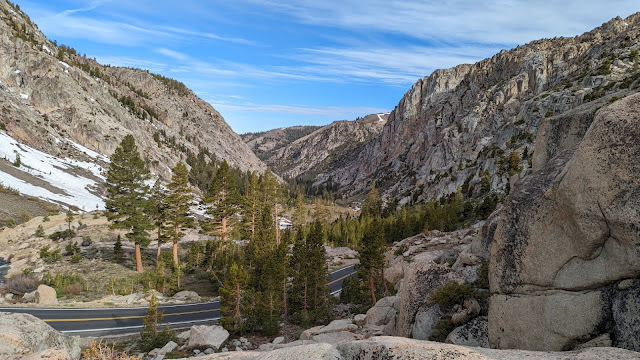 Beginning around 2 million years ago, glaciers began tearing away at the higher parts of the Sierra Nevada, removing many of the volcanic flows and carving U-shaped gorges like the one above, visible just a few miles downstream of Sonora Pass at Chipmunk Flat. The ice age was not a single event. The ice advanced and retreated more than a dozen times, with warmer periods in between that lasted for thousands of years. It was during one of these interglacial periods that something extraordinary happened in the upper reaches of the Stanislaus River drainage. Roughly 150,000 years ago there was a volcanic eruption down in the canyon. 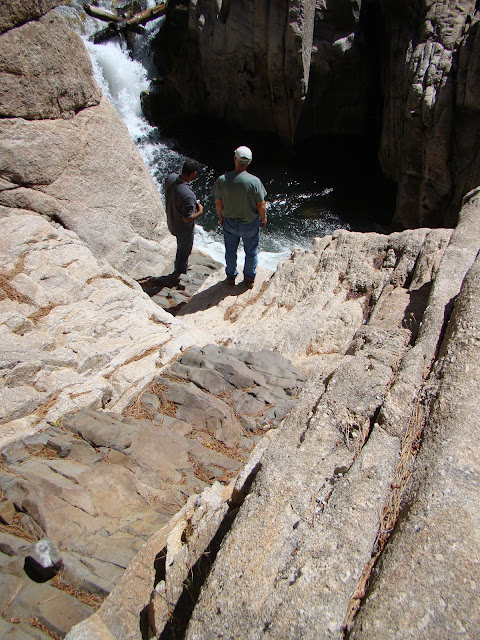 It wasn't a large eruption, certainly not on the scale of some of the rhyolite cataclysms that devastated the regions east of the Sierra crest 767,000 years ago. It was more of a mild cinder cone eruption that might have flooded a portion of the canyon, flowing just a few miles downstream before the lava flows ceased. Subsequent glaciations scoured away much of the remaining lavas, and river erosion removed still more. Hidden in a cleft, a basalt dike just upstream of the columns may be all that remains of the volcano responsible for the eruption. It's not much, just the fracture in the granite that filled with basalt that fed the eruptions above. 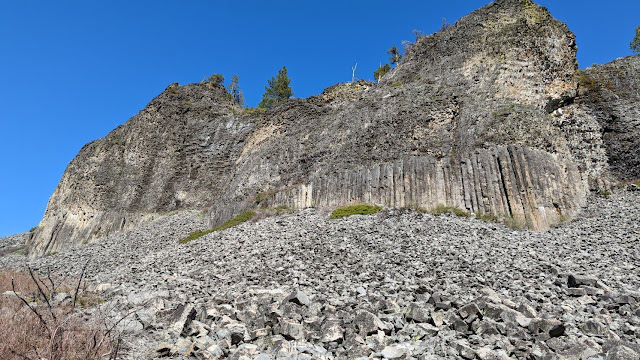 The remains of the lava flow, though? Spectacular! The lava flow (or flows; there were possibly two of them) was ponded by some obstruction downstream, most likely a glacial moraine, and a modest lava lake developed, several tens of meters deep. As the lava cooled, it shrank and the rock fractured in generally hexagonal columns roughly perpendicular to the surface against which the lava flowed. Since the lava flows were erupted onto a canyon bottom with slopes on either side, not all of the columns are vertical (this is also true of the better-known Devil's Postpile). 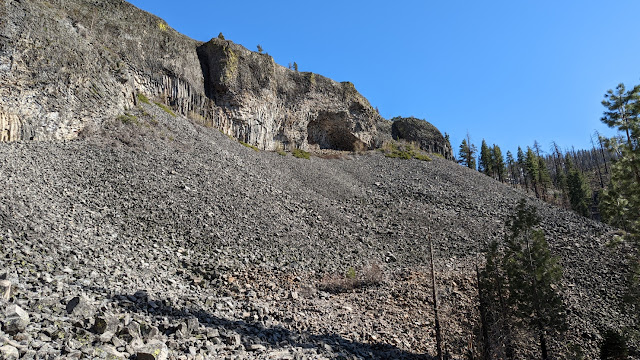 Subsequent glaciations (primarily the Tahoe and Tioga stages for those who want to know) tore away at the lava flow, exposing the columns. Over the last 10,000 years or so since the last Tioga glaciers melted away, frost wedging has pried many of the columns loose, dumping them into a vast talus slope that covers the base of the lava flow. Cold air emanating from the base of the talus suggests that a mass of ice might actually remain deep within the rockpile. 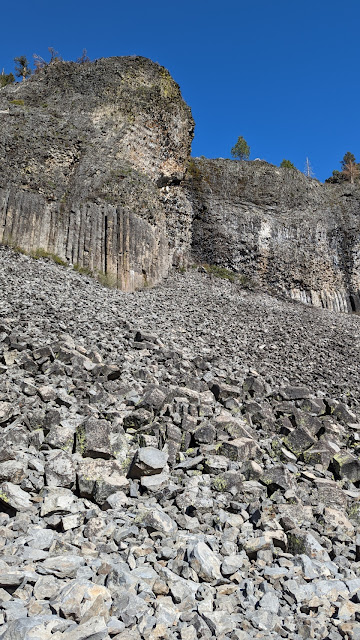 Columns of the Giants can be easily visited by following Highway 108 about 25 miles east of the Pinecrest Lake Resort area or 13 miles west of Sonora Pass. Overnight accommodations can be found at nearby Kennedy Meadows and a number of National Forest campgrounds. Educational groups may be able to make arrangements to stay the High Sierra Institute at Baker Station just a few miles away (contact the Yosemite Community College District for more information). 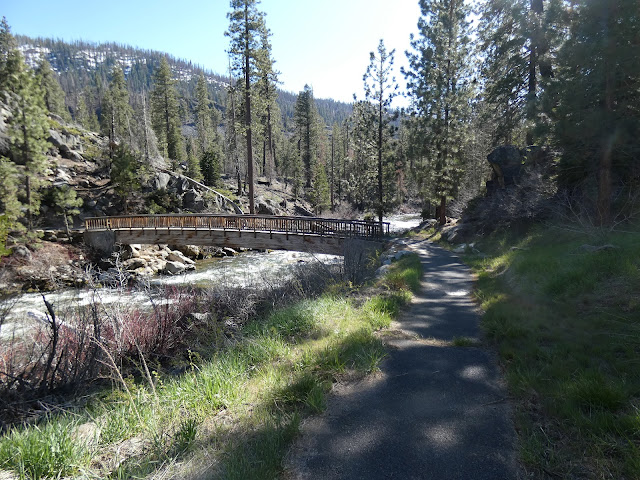 Stanislaus National Forest has provided a parking area and simple toilets for visitors, and a paved ADA-compliant trail and bridge provides access. The trail is only a few hundred yards long, and the visual rewards are great. 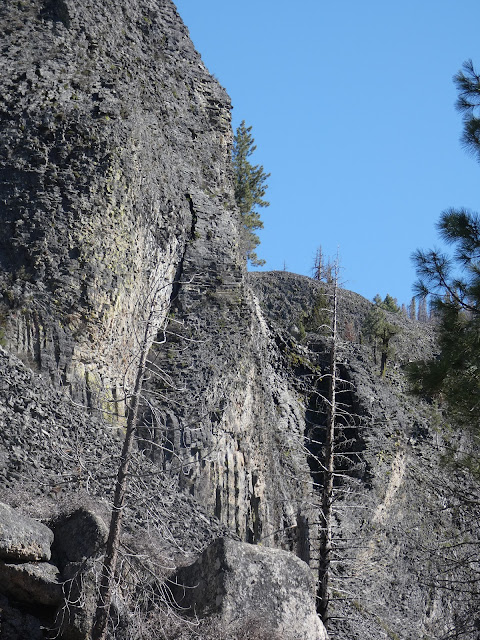 Can't get there in person? My friend and colleague Ryan Hollister put together a marvelous virtual field exercise that provides an experience that is the next best thing to being there. It was featured on NPR's Science Friday a few years ago.

Nice article, Garry! Columns of the Giants is a great geologic spot. Also, there are at least 6 other dikes that I, and my Columbia College field geology students, found upstream of the one shown. I can send a .kml file that will show them on Google Earth for anyone that wants to do some further exploration. Email me at jewato@gmail.com and we'll go from there.

Great area to watch for meteors as well. Darker than most places this side of the sierra.