California's Rarest Ecosystems: The Serpentine Soils of the Red Hills (Part Two of a Two-part Miniseries) 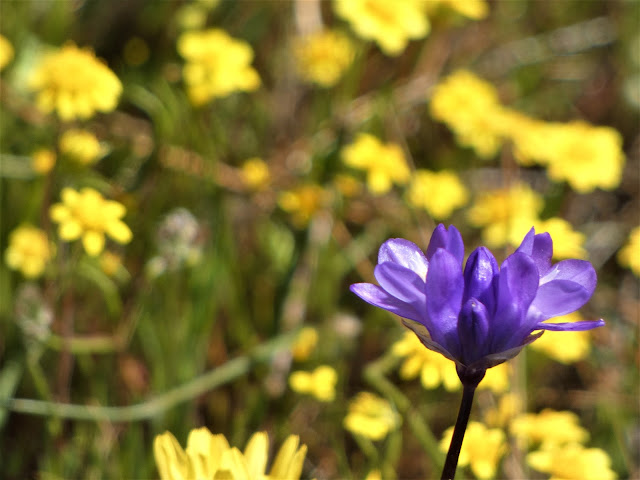 Imagine a world turned upside down and inside out. A place where the underworld realm is exposed to view, where all is out of equilibrium. It sounds like the introduction to a dystopian horror movie, but in this case, it is a description of one of the truly rare and unique ecosystems in California: the serpentine soils.
This is the long-delayed second part of my two-part miniseries on rare ecosystems. Part one on the prairies and vernal pools was published back in April. 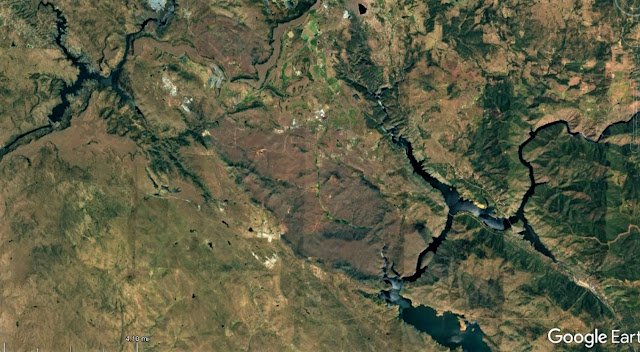 The Red Hills Area of Critical Environmental Concern is a rather clumsy name for one of the most unique places in all of California. It comes by the name righteously, as can be seen in the Google Earth image above. The soils have a distinct red-brown color, even though the serpentine-rich rocks they come from are generally green or black in color. And these are truly alien rocks. They are not part of the surface realm; they are the materials of the earth's depths, far below the crust that we live on. The earth's mantle lies at depths of 15 to 40 miles beneath the surface and is composed of iron and magnesium-rich minerals like olivine and pyroxene. These minerals may be stable deep within the earth's interior, but if they are exposed at the earth they are out of chemical equilibrium and subject to rapid reactions with oxygen, water, carbon dioxide, and acids in soils. The iron quite literally rusts during oxidation.
The thing about soils rich in iron and magnesium is that they are poor in macronutrients like potassium and calcite, and include some toxins like selenium or nickel. The vast majority of plants cannot tolerate these chemical conditions. But there are a few.
The change is stark. Driving up Red Hills Road from the west, one passes through typical foothills oak woodlands, with a thick covering of grass. And then just like that the grass disappears along with the oaks. One enters an area dominated by Buckbrush with the occasional Foothills Pine (Gray Pine). In many areas, barely any vegetation covers the rocks at all.
The region was long seen as having no particular value. The ultramafic (mantle-derived rocks) were related to the gold-bearing lodes, but rarely had any valuable ores in and of themselves. Despite the Homestead Act in the late 1800s that sought to give citizens free land in the west, there were no takers in the Red Hills. No useful crops could be grown on the soils, which was a requirement for owning the property. For many decades the Red Hills were used as a de facto garbage dump and shooting range. 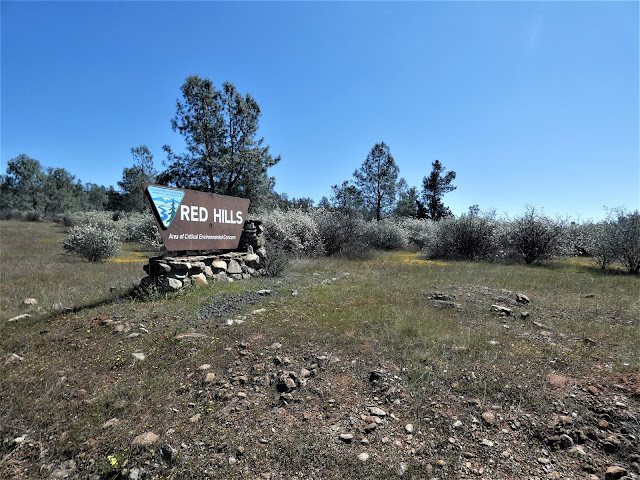 By the late 1980s the Bureau of Land Management, the federal agency in charge of the Red Hills area, belatedly recognized the unique nature of the ecosystem here, and declared it an "area of critical environmental concern". Clean-ups were organized, and minimal tourists facilities (trails, parking areas, vault toilets, and a nature trail) were constructed. Today the park (why not just call it a park, after all?) is a local favorite for wildflower enthusiasts, birdwatchers, and hikers, especially in the spring. 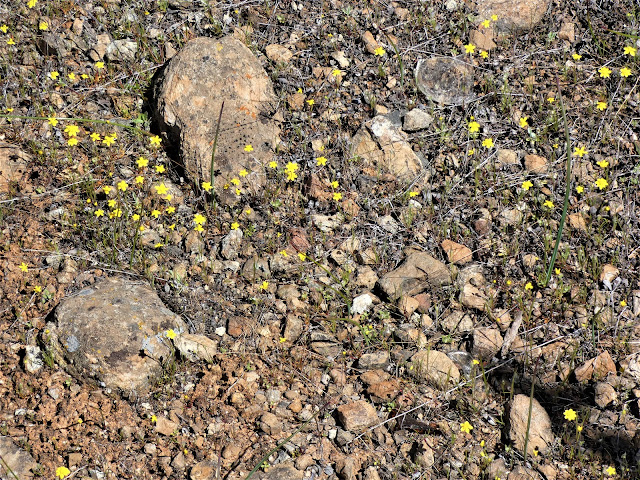 So what is the geologic story of this strange and wonderful landscape?
The Mother Lode is famous as the source of the ores during the Gold Rush in 1848-53, and many people know of the association of quartz veins with the gold. What is less known is that the Mother Lode consists mostly of metamorphic rocks like slate, greenstone, and marble, not the granite that is found in the higher parts of the Sierra Nevada. These metamorphic rocks are the twisted and baked remains of sea floor muds and silts, lime from tropical reefs and shelves, and volcanic rock from the oceanic crust. These collections of crustal rocks (called "exotic terranes") were transported across the Pacific Ocean and slammed (in the geologic sense; they moved at maybe 2 inches a year) into the western edge of the North American continent, mostly in the late Paleozoic and Mesozoic eras (the Mesozoic era, from around 251 to 65 million years ago, is best known as the "age of the dinosaurs"). The different terranes are separated from one another by major fault systems.
The rocks of the Red Hills were part of the huge fault systems and included slices of the earth's mantle, consisting of the dunite and peridotite mentioned above. The original mantle rocks were mostly metamorphosed into serpentine on their upward journey along the fault systems.
Serpentine (or more properly serpentinite) was declared the California State Rock in the 1960s, in part for its association with asbestos, which is a fibrous crystal form of serpentine. Asbestos was a "wonder mineral" from at least Roman times, as it was fireproof, and could be woven into a fabric. As fire insulation it no doubt saved many lives, but there was a cost. Those who were constantly exposed to asbestos were far more likely to contract a deadly disease called mesothelioma. It is now a cottage industry for people in the business of removing asbestos from older buildings.
There was a political brouhaha in 2010 when some groups tried to change the state rock to something else, but geologists objected on the grounds that it was an appropriate symbol of the state due to the research value of having mantle rocks at the surface, and the value as an ore for other important metals such as chromite (used in armor and stainless steel), and mercury (used original to separate gold from its host ore). The proposed bill was never voted on. 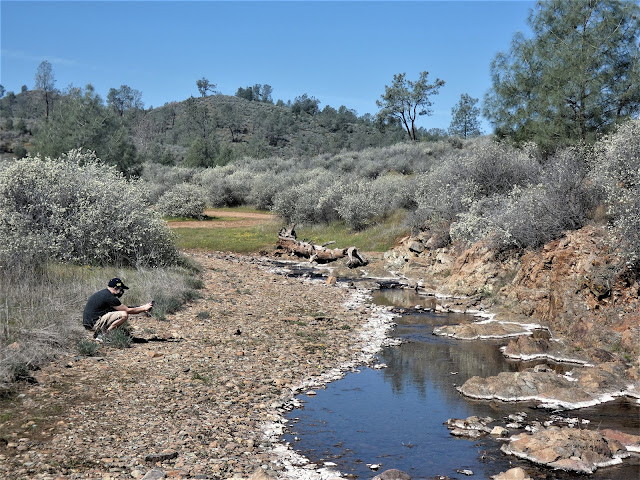 The Red Hills are semiarid with only a few creeks that dry up quickly as the summer progresses. But a few small springs and pools persist through the year and in those pools is an endemic fish, the Red Hills Roach, a distinct subspecies of the California Roach. It is found nowhere else in the world. We saw some of them a few weeks ago during our visit, but the video below is from an earlier, wetter year.
The rest of the photos are some of the flowers we saw this year, some old friends, and one or two new discoveries. 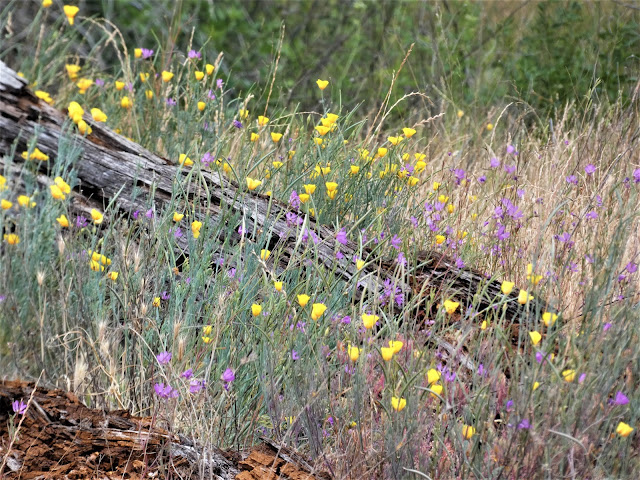 The last flower was one we've not noticed before. It seems to be a Fort Millers Clarkia, but I am open to correction!
There are just a few flowers left in the Red Hills as of last Friday, but to see the spectacular show you'll need to wait until next spring. But...the rocks are always there!
The Red Hills Area of Critical Environmental Concern is in the Sierra Nevada foothills near Chinese Camp off of Highway 120. If you want to learn more, or pay a visit, information about the Red Hills can be found on this BLM website, and the trail and road map can be found here.