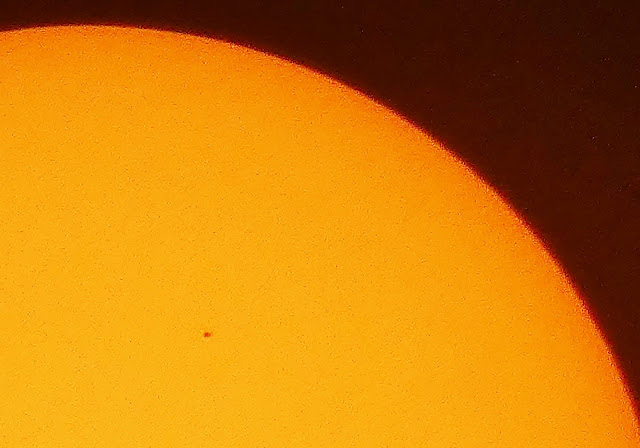 The Sun shown just a bit less brightly today, not that anyone could tell. The planet Mercury passed across the disk of the Sun over the space of a few hours this morning, presumably blocking a bit of sunlight from reaching Earth. It was probably the last time I'll ever see a planetary transit.
One needed some special equipment to see the event, mainly a camera or telescope with enough magnification to see the planet, and filters powerful enough to keep the observer from burning out his/her retinas. Luckily, I was able to locate the camera filter I used to observe the solar eclipse in 2017, and my camera has a 60x zoom. In the picture above, Mercury is just above the center of the Sun's disk. When I looked again about 45 minutes later, the planet had clearly moved to the right across the Solar disk (below).
I've seen three transits in my life, today's, Mercury in 2016, and Venus in 2012 (below). The next transit of Mercury is in 2049, when I'll be 92 years old. I may or may not be paying attention then. The next transit of Venus will take place in 2117. I don't expect to be around for that one at all. I wondered whether there would ever be a simultaneous transit of both Mercury and Venus, and it turns out that one will take place on July 26, 69,163 AD. I think I'll let that one pass...

Mercury is the smallest of our "regular" planets, and is even smaller than it appears in the photographs because it is around thirty million miles closer to us than the sun. It's actually not all that much bigger than our own Moon. The planet has been a bit of a stranger for most of time because it is hard to see in the dusk or twilight, and we've only had two space probes come close. Luckily, one of the probes has been orbiting for the last several years, so we have a treasure store of data on the planet. It was the subject of one of my very first blog posts back in 2008.
Posted by Garry Hayes at 3:58 PM