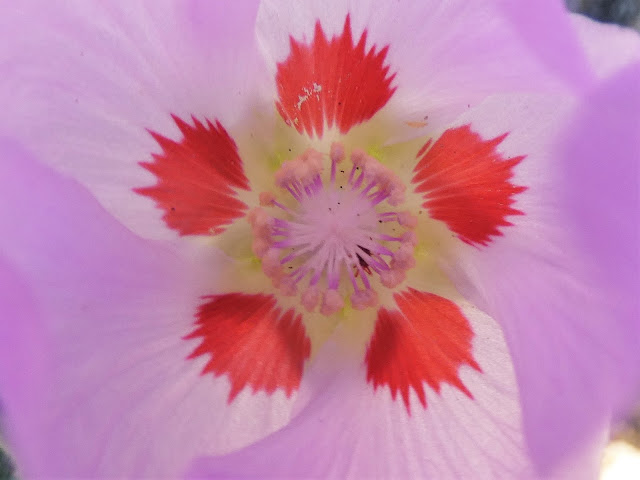 The Desert Five-Spot (Eremalche rotundifolia) has to be one of my favorite desert wildflowers. I don't see it often because it is rarely blooming during my customary visits to Death Valley National Park in February. It's mysterious because it always seems to be hiding its five spots in a globular-shaped bloom that doesn't seem to open out entirely. For these reasons, our visit at Death Valley National Park was extraordinary. We saw some of the Five-Spots in all their revealed glory. 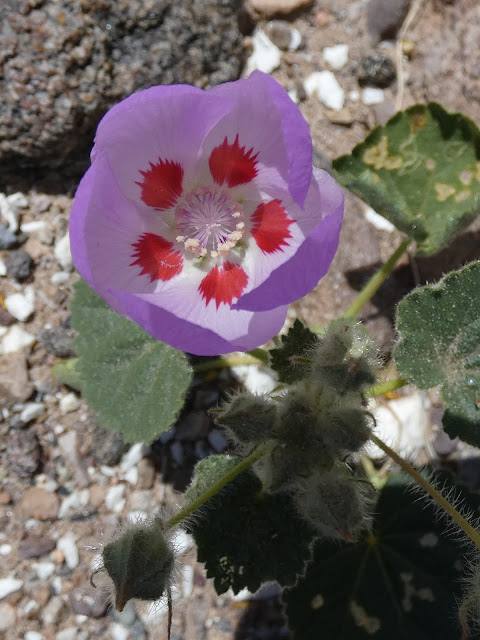 We were on the third day of our Semi-Super-Bloom Tour of California. We were seeking out not the news-making corners of the state that are attracting tens of thousands of people, but the quieter places that haven't been in the news because they didn't quite as much rain as the places like Elsinore and the Antelope Valley Poppy Preserve. There are flowers out there, maybe not as abundant, but beautiful just the same, and there were no crowds. 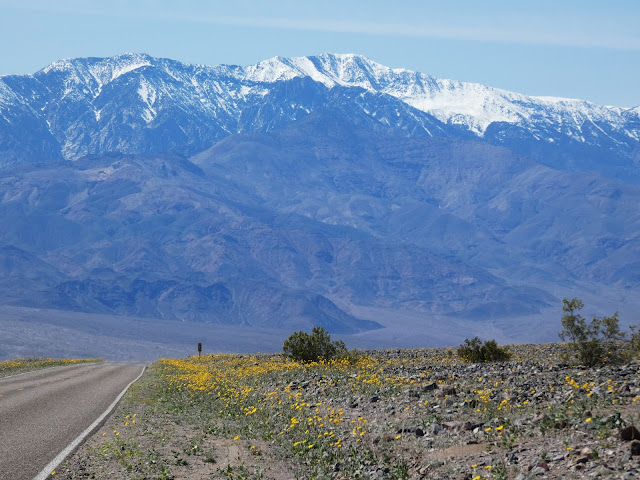 Death Valley is the driest place in North America, and the hottest place in the world (so far). Wildflowers are a precious gift in such a place, although they are not in any way out of place. Life finds ways to thrive in even the harshest of Earth's environments, and the flowers of Death Valley are no exception. The seeds can lie dormant in the soil for years, and once they germinate they can grow fast and lay down more seeds for the future. In the process the plants become a food source for all kinds of insects and animals, and as such are an important link in the ecosystem. 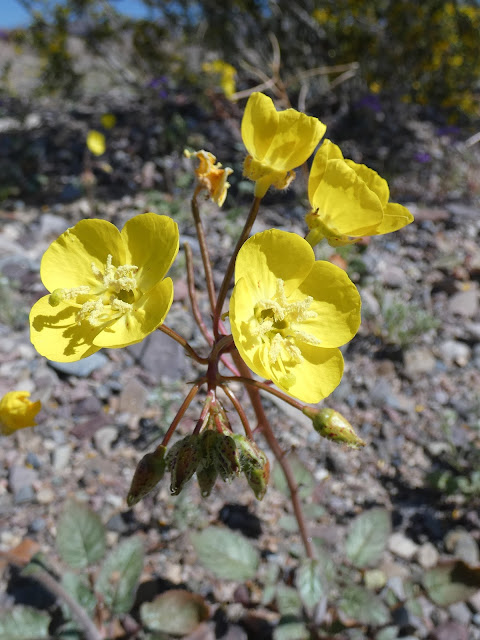 Knowing where to look for wildflowers is important when the rainfall is more sparse or later than usual (as is the case in 2019). Many of the usual tourist magnets like Zabriskie Point and Badwater were lacking in flower displays but a drive south towards Jubilee Pass and the ruins of Ashford Mill (15 miles or so) provided some scattered color. We saw what I assume were Yellow Cups (above) and Phacelia (below). Gentle corrections are encouraged! 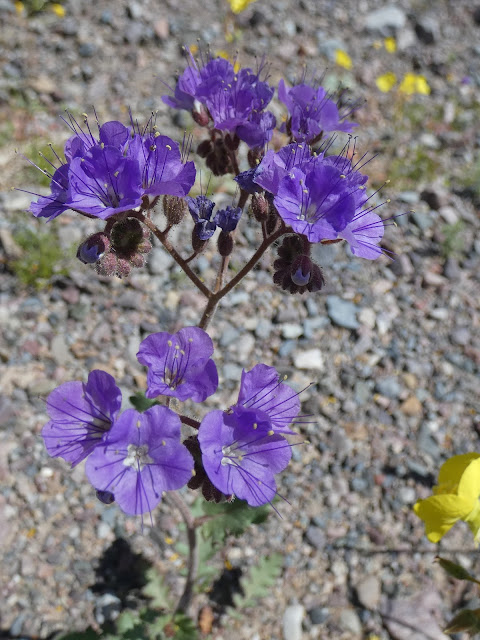 I haven't figured out the name of the flower below yet. 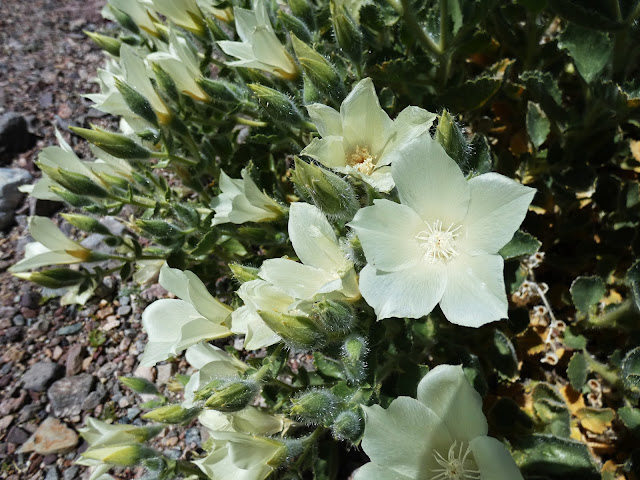 But Desert Gold is hard to miss. When a super-bloom does occur in Death Valley, there are millions of them on the slopes of Jubilee Pass. There were scattered patches of them, especially along the highway, where the runoff from the pavement provides an extra edge in the water supply for the seeds. 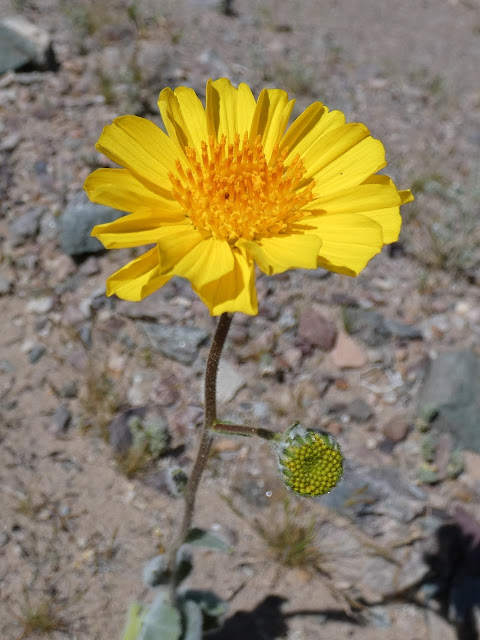 Hairy Sand Verbena is a familiar sight from super-blooms past. We found a few of them along the road near Ashford Mill. 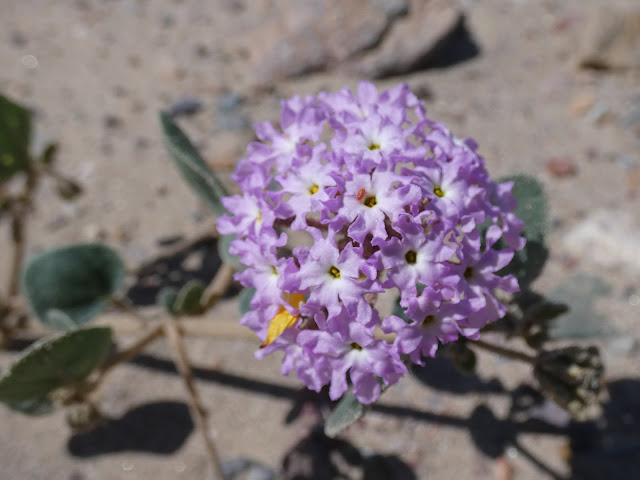 These are plants at the cusp of existence. They arose out of some late storms that provided the water needed to germinate, but it is a only few short weeks before temperatures soar and the desiccating winds begin to blow. Life will once again go into hiding to wait out the searing months. 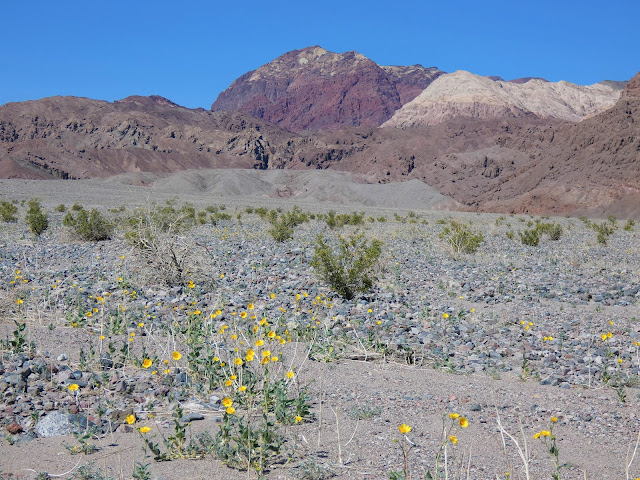 Enjoyed this post! Desert rock nettle (Eucnide urens) for the white one? (looks like our blazing stars so searched for them on the Death Valley wildflower ID website, http://wildflowersearch.org/)

Garry,
I took off work for my birthday Wednesday and did a loop tour around the San Gabriel Mtns. I stopped at Vasquez Rocks, Poppy Reserve, Desert Woodland Park, Devil's Punchbowl, and took a quiet mountain road through Wrightwood to the 15 fwy. Most stops were inspired by your posts! It was an awesome day, so thanks to you! I also reviewed your relevant posts on the stops to learn some new details about the places I visited.