What's the Most Alien Landscape You've Ever Explored? Here's a Candidate 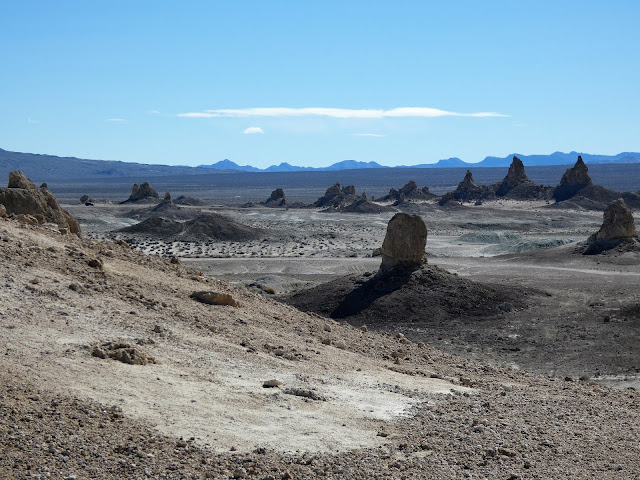 What is the strangest landscape you've ever explored? That is, the kind of place that makes you think that this just isn't part of planet Earth. I got to experience one of those places last week during our field studies trip to Death Valley National Park. 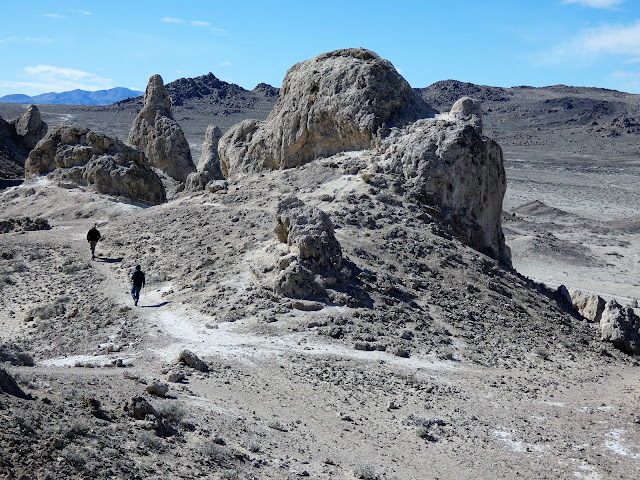 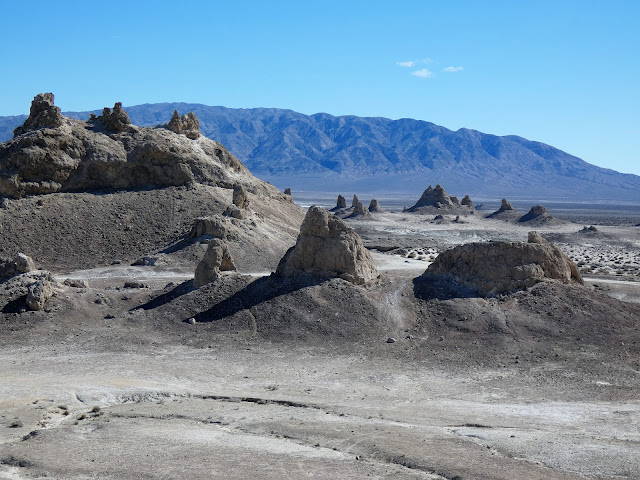 The Bureau of Land Management has always had an uncomfortable fit with land use priorities in the American West. The Bureau began as a land disposal operation under the direction of the Homestead Act back in the latter part of the 1800s. The land that was not selected by settlers from the east was seen as sort of a wasteland of little interest to most people. But land ethics change and by the 1970s many people began to recognize that many BLM lands were every bit as precious as the adjacent national parks and monuments. This is one of those landscapes. They're called the Trona Pinnacles, and I saw them up close for the first time in my life last week. 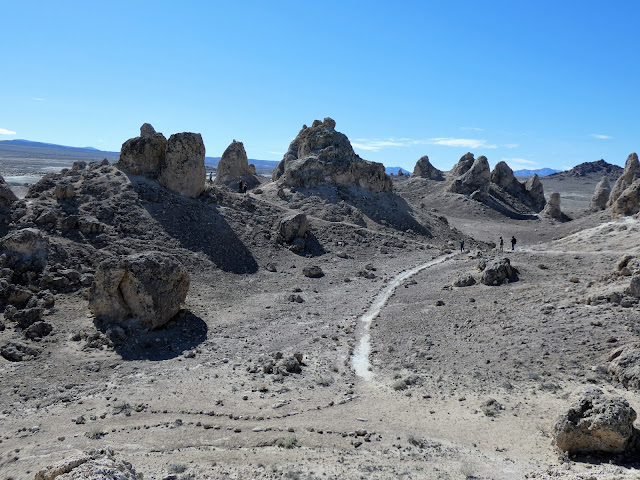 When one realizes the richness of Death Valley National Park and all of the strange and wonderful features within, one can almost understand why I haven't been to the Trona Pinnacles before. By the time we arrive in their vicinity, we've already seen four days full of strange landscapes and on the last day we have two important geological localities and then a six-hour drive home. There just hasn't been enough time.

This year was different. We arrived at the park in midst of one of the most intense storm events of the year. Record snow and rain was falling in the coastal regions and the Sierra Nevada, but we had mostly benign conditions during our journey. But the storms caused the closure of the road that we needed to access Aguereberry Point, and construction had closed the access to Mosaic Canyon. We needed a last geological stop and I remembered how we often could see the pinnacles in the distance as we headed home. Why not see if we could get there? We headed south on the five-mile gravel road outside of Trona and had little problem reaching the pinnacles. We started exploring. I was awe-struck. 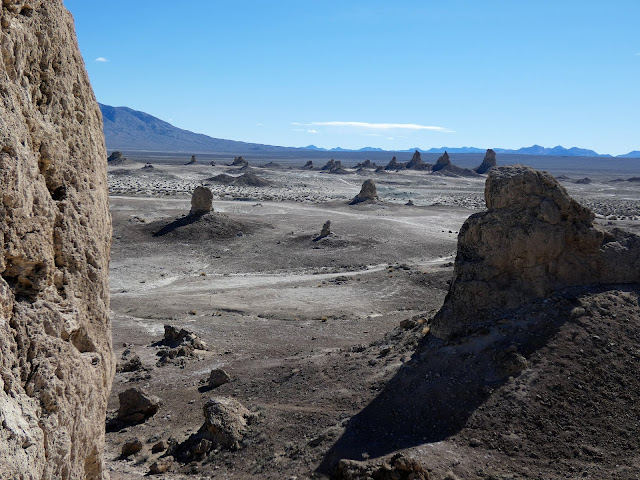 There are 500 of these pinnacles in three groups. They range in size from a few feet to more than 140 feet high, with an average of around 40 to 50 feet. They occur in three groups (the north, central, and south groups). We were exploring the north group, consisting of some 200 pinnacles. But how did they form? Are they volcanic? Are they alien landing beacons? According to the Star Trek canon, that might be the answer...in what is widely regarded as the worst Star Trek movie, The Final Frontier, the pinnacles formed the setting of the final confrontation of Captain Kirk and the "God" who needed a starship to escape his planetary prison ("What does God need with a starship").

So what really happened? 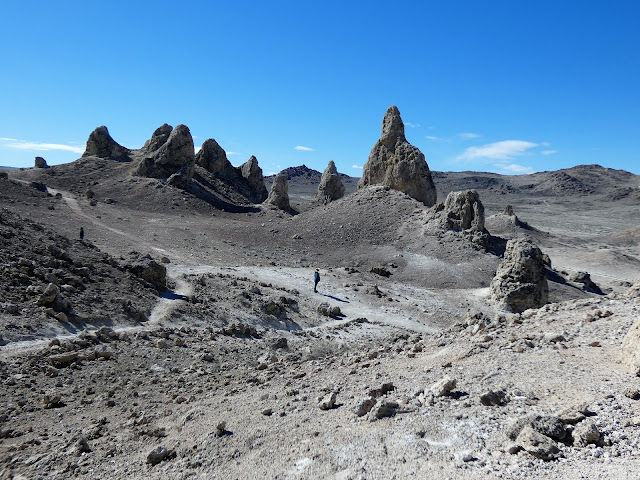 Today the bottom of the Searles Valley is a sun-blasted dry lake full of salts and other soluble chemicals that are mined on a large-scale basis. But between 12,000 and 25,000 years ago the landscape was much different. The last of the major ice ages, the Tioga, produced extensive glaciers throughout the Sierra Nevada. The Sierra rain shadow prevented many glaciers from forming in the mountains to the east, but glacial meltwater filled the basins. One by one they spilled over into the adjacent valley forming a series of large lakes: Mono, Owens, China, Searles, Panamint, and ultimately Manly in the bottom of Death Valley. These are called pluvial lakes. The surrounding valley floors sported grassy prairies and the hills had forests of trees like pinyon, juniper and at higher elevations, firs. The prairies were grazed by bison, horses, camels, and mammoths. They were hunted by Dire Wolves and Saber-tooth Cats and other fearsome carnivores. 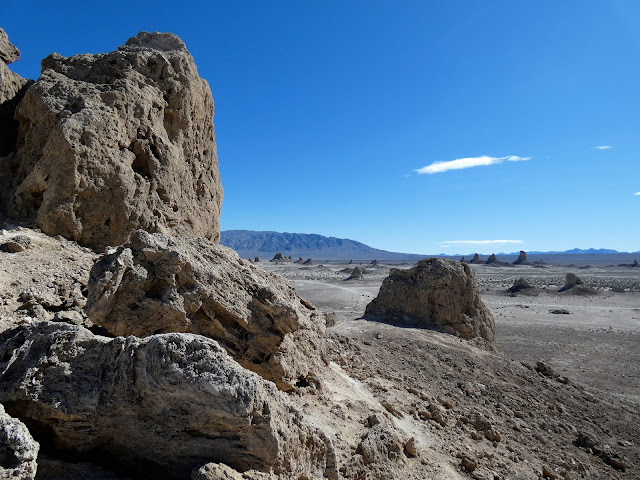 The towers are composed of calcium carbonate, which is the mineral calcite. The porous form of calcite is called tufa. The tufa formed when calcite-rich freshwater springs on the lakebed interacted with the alkaline water of the lake. The location of the springs seems to have been guided by faults running through the area. The towers could only have formed when covered with water, so the pinnacles have been exposed to the elements for more than 10,000 years.

More recently formed towers are visible at Mono Lake near Lee Vining and Tioga Pass in the Sierra Nevada. They were still forming when Los Angeles diverted the water from streams flowing into Mono Lake in 1940. The lake began to dry, exposing the tufa towers. 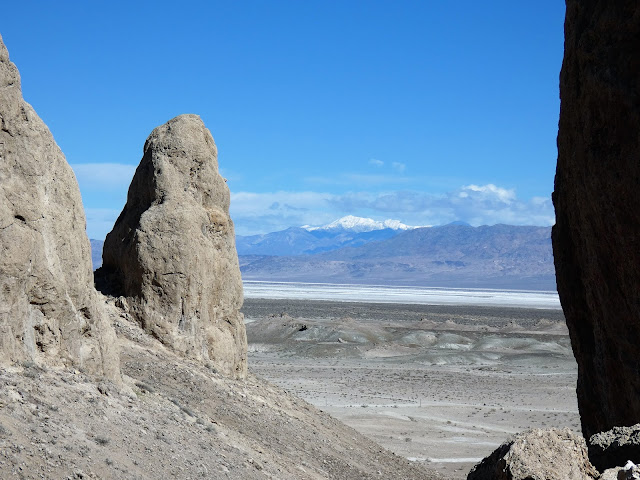 The snowcapped peak in the picture above and below is Telescope Peak, the highest point in Death Valley National Park at 11,043 feet, more than 9,000 feet above the floor of Searles Lake. Such are the extremes of this fascinating landscape.

There was a lot to see in Death Valley and the surrounding region during our journey last week. More blogs will follow! And while you are waiting for the next entry, tell me about the most alien landscape you've ever seen... 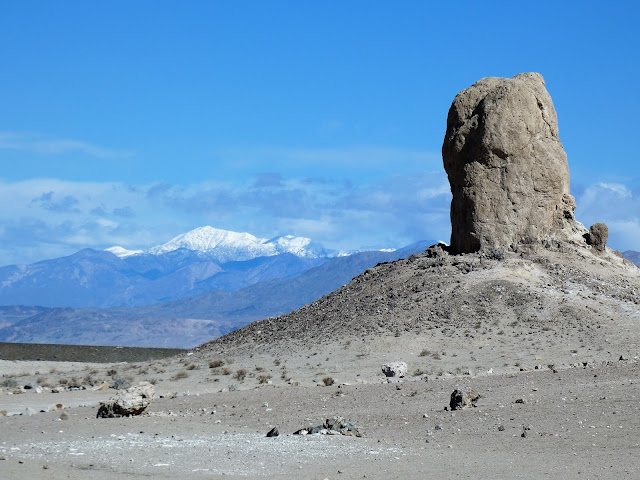 I stumbled upon Pine Park in a remote part of SW Utah, and it felt like I rounded a corner and suddenly appeared in an alien world.
https://www.thespectrum.com/story/life/2015/08/06/pine-park---beautiful-and-secluded-spot/31243437/

Thanks for the pics Garry. We've seen the Trona Pinnacles off in the distance on our return from Death Valley many times, but like you never had the time to make the trek out to them. These are the first up-close pics I've ever seen of them. I'll see if I can twist Jeff's arm to take a left turn next year. :-)