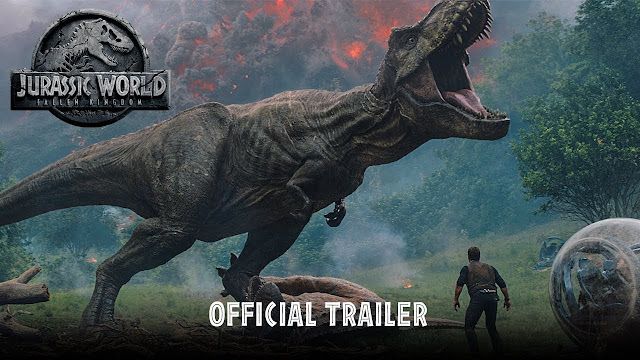 To be sure, I enjoyed myself.

It was about 5:45 in the afternoon and we were out and about doing errands. I had been called into an emergency meeting about the soon to be constructed outdoor education lab at my campus. It turns out that bids came in way too high so we had to start making a list of things that we were going to have to give up in order to get the project built. It was a series of difficult choices. To blow off steam, we decided to see what was being shown at the local cinema. The next movie, at 6:35, was Jurassic World: Fallen Kingdom. We got our popcorn and soda and headed in. After 30 minutes of trailers, the lights dimmed and the movie began. As scenes unfolded, I imagined the meeting that went on before this movie was greenlighted: "we have millions and millions of dollars, how many things can we throw up on the screen?" In other words, the direct opposite of my meeting.

It's almost as if we've lost our fascination with dinosaurs, so we needed our film to be spiced up with all kinds of movie tropes: volcanoes, lava flows, pyroclastic surges, gothic mansions, secret underground laboratories, not one, but three or four dastardly villains, and deeply hidden family secrets. There was the obligatory child in distress. And (spoilers ahead!) some people get eaten, others almost get eaten, lava almost eats somebody, and there was an unusually moral component in the character of those who ended up as part of the dinosaur buffet. And the poor Brachiosaurus brought a tear to my eye.

But I am a geologist, so let's get to the important part of the review: did they get the geology right?

No, of course not.

But taken as individual scenes, some of the geology was okay.

As in practically all Hollywood movies, the director mixes up his volcano genres. Isla Sorna, 120 miles off the coast of Costa Rica, is a volcano without an origin (the island doesn't exist of course, but the location doesn't make much geologic sense unless it resulted from a hot spot).

When deciding the mayhem to be produced by a volcano, one must choose: is it an oceanic hot spot that produces shield volcanoes and basaltic lava flows and, as Kilauea has shown us these last few months, the occasional phreatic (groundwater) explosion? Or is it an island arc stratovolcano, whose andesitic or rhyolitic magmas produce violent caldera eruptions?  The movie cannot make up its mind: there are scenes of basalt flows and Hawaii-like scenery, but on the other hand, the climactic eruption is composed of explosive ash columns and pyroclastic surges.

The climactic volcano scenes have the heroes outrunning (or out-rolling) the pyroclastic surge which would seem highly unlikely in real life. The Chris Pratt character looks to have inhaled some of the ash which should have caused him some severe respiratory problems later on in the movie. He also should have experienced some severe burns from his close encounter with flowing radiant lava.

I was actually bothered a bit about how the ferry was able to get underway without damage from the incandescent pyroclastic flow on the dock. It was necessary I guess to get the emotional impact over the demise of the aforementioned Brachiosaurus. 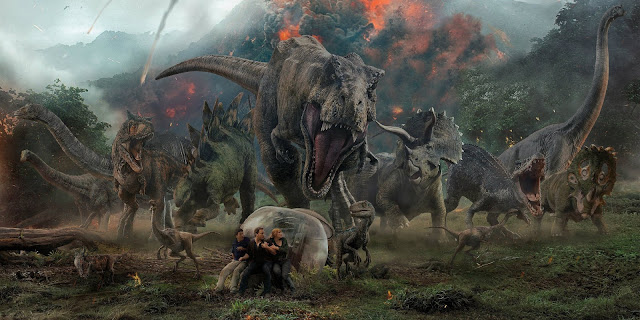 But my biggest beef is the failure in imagination concerning the "extinction-level" volcanic event. The eruption that is supposed to have destroyed all living things on the island was kind of underwhelming.  A ferry boat was able to outrun it. There was (to my memory anyway) the barest of an eruption column. If this was really the kind of volcanic event that would erase all life from the island, there should have been a caldera-forming eruption like that of Krakatoa (1883) or Tambora (1815). The sky should have been blotted out and the ship should have been enveloped in darkness.

Maybe next time they should consult with me, because I have a great idea about how the island could have been destroyed, and it would have had some great visuals. Some irresponsible websites have been criticized for suggesting that the Big Island of Hawaii could suffer unprecedented catastrophic damage caused by the collapse of a flank of the island into the ocean. Such an event is simply not in the cards for Hawaii right now, but some memorable slides have happened in prehistoric times. The long runout debris avalanches caused thousand foot high tsunamis that would have ravaged many coastlines around the Pacific Ocean rim (not to mention in the Hawaiian islands themselves). Imagine a gigantic eruption column with ash flows spreading over the entire island and then an entire flank sinking into the ocean producing a gigantic tsunami that nearly destroys the escaping ship.

But almost no one ever thinks to ask me (believe it or not I did scout out shooting localities for a proposed Hollywood movie once). 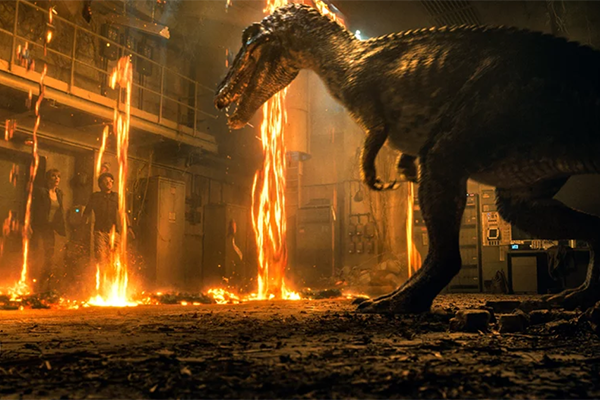 The dinosaurs in the movie are fine, although there were exaggerations of scale, especially with the Mosasaur (oh, and the Mosasaurs and Pteranodons in the movie aren't dinosaurs; they occupy separate lineages within the reptile clan). The one in the movie was WAY too big. Mosasaurs have been found as fossils in our region and many others, and they're no larger than 35 feet or so. Terrifying, yes, but not the behemoth that existed in the movie's universe. And where did they get Mosasaur DNA? I don't think mosquitos had much of the chance to bite these deep-diving marine creatures.

There's a larger issue though. A central tenet of the movie was the desire of the movie's protagonists to let the dinosaurs live together in a big happy stable ecosystem. The problem is that the dinosaurs they resurrected never lived together in an ecosystem. They would have all technically have been invasive species. Many or most of the interactions between these species and their environment would have been problematic, including food sources for the herbivores (no grass or flowers during the Jurassic, for instance), and no evolved defenses against viruses and other disease-causing organisms. Our present-day efforts to bring back mammoths make a bit more sense since they've been extinct for only a few thousand years, and they lived in ecosystems much like those that exist today.

But still, all in all I enjoyed the movie. Geology criticisms aside, I'd give it a B+. 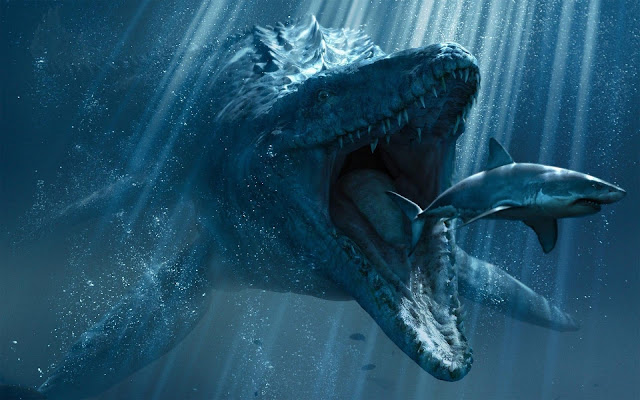 All pictures are courtesy of Universal Studios
Posted by Garry Hayes at 1:00 AM

Gary, thanks for the great review. It's a fun (and edifying) exercise to think through the JP JW movies from a scientific viewpoint. I don't think it spoils one's enjoyment either. From the perspective of the plot, it would be difficult for a realistically-sized mosasaur to pull down the Indominus rex, and, after all, if we're to be absolutely accurate, the whole premise of Jurassic Park falls short; I agree with a healthy B+. It was fun!