At the Frontier: River Otters and the Tuolumne River 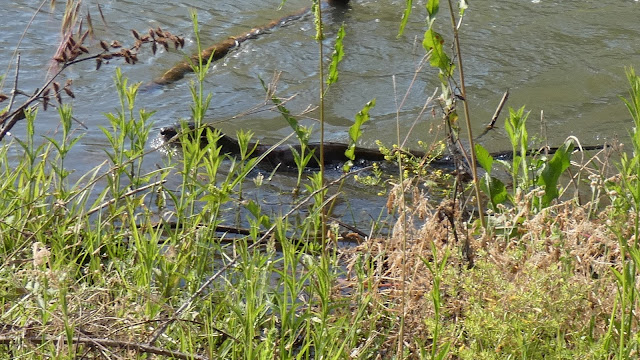 Here in California we've abused our rivers, especially in the Sierra Nevada, and in particular, the Tuolumne River, the one in my backyard. The Gold Rush of 1848 was catastrophic. Miners dug up river vegetation and processed literally all the river gravels for the elusive metal. Gold dredges did incalculable damage to stretches of the rivers in the Great Valley by ripping out the riparian vegetation and destroying the soils along the river floodplain. Underground mines brought minerals to the surface that oxidized to form acids and other toxins. Mercury used in the gold recovery process leaked into river waters. In the twentieth century we built massive dams that altered the water quality and flow levels.  There are recovery efforts happening, but it will be many more years before the river can be truly healthy for salmon and all the other life forms that historically lived along the river. There are many other challenges, like the invasive hyacinth, a water plant that clogs river channels, pollution, and low flows related to extensive droughts in California (the water is warmer than it should be). 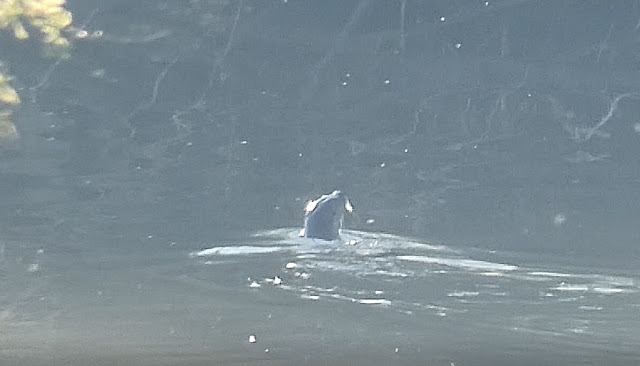 On of the bellwethers of the health of a river system is the presence or absence of apex predators and other native species. The predators cannot thrive if their prey species are not present, whether from pollution, drought or other cause. That's always on my mind when I walk the shores of the Tuolumne River where it flows into the Central Valley. This stretch of river is controlled by a system of reservoirs and irrigation canals, and flows are tightly controlled most of the time. I'm always looking for signs that the native species are present and hopefully thriving. In the last few years I've run across foxes, raccoons, beavers (gnawed trees, anyway), hawks and ospreys and much to my delight on four occasions now, Northern River Otters (Lontra Canadensis).
The current range of the otter ends in our region. It's their frontier. According to the River Otter Ecology Project, there have been sightings on the Tuolumne River, and just one or two in the Merced River one drainage to the south (some otters were spotted in Yosemite Valley for the first time in decades last year).
The frontier once extended farther to the south. There's another river that has suffered even more degradation. It's the upper San Joaquin. It flows out of the Sierra Nevada high country between Yosemite and Kings Canyon National Parks. So much of the river has been diverted for irrigation that the river hasn't flowed on many stretches for more than half a century. There's no habitat for wildlife when there is no river. A series of lawsuits and agency agreements resulted in the formation of the San Joaquin River Restoration Project that recently saw water flow again in the river. Maybe there is hope that the river will host otters again as well.
My adventure with the otter this morning started when I was looking for birds along the river's edge. I happened to look down and saw a strange looking round head looking at me through the grass, It wasn't even a second, but I thought it might be an otter. I walked downriver a short distance and started watching. After about 10 minutes, the otter swam by me, maybe 25 feet away. I snapped two pictures, and then remembered the video. I hit the "play" button, and started contentedly watching the otter swim upstream at a languid pace. Then I hit the "play" button again and actually started recording (but not realizing it). In the end I got a one second video of otter, and a minute and a half of random swinging camera.
The top picture is the otter from this morning, the closest I've ever been to one. The second is a shot from much further away of an otter I saw three weeks ago. Since I didn't get the greatest video ever seen of an otter this morning, you'll have to settle for the video from three weeks ago.