Harmonic Tremor? Volcanoes under Modesto? Nah, It's Kids and Science


The seismometer on our campus was going crazy today. Usually such high levels of seismic activity are cause for great concern, due to the rapid movement of magma in the crust, or an impending "big one". But there was no such concern today. The seismic action was due to kids running back and forth down the hallways of our Science Community Center. And they were doing science!
Today's Science Olympiad brought together hundreds of students and adult volunteers in a competitive event that drew on all the fields of science: physics, chemistry, earth science, geography, geology, anatomy, biology, engineering, and more. Local junior high and senior high schools fielded teams competing for the chance to move up to the statewide meet. Few football games provide the level of intensity that I saw today.

Admittedly I didn't see a heck of a lot. I was responsible for hosting the "Fossils" event, which had teams competing in all four time slots during the morning and early afternoon. It left me no opportunity to wander through some of the other events, or the newly opening Great Valley Museum, or the Planetarium shows. But I did get to see some intense trench competition among the students in my event. To explain, there are glamor events like robot building or bottle rockets that garner lots of attention. The students in events like mine are the quiet ones who make up the bulk of the teams, and earn most of the points for their schools. The competition is not won or lost in the handful of big events, but in the many "lesser" topics. What's nice about it? The quiet kids, the introverted kids, they get to be heroes at times like this. An unexpected win in an event like Fossils may be the ticket for their school to advance to the state level.
Such events are not possible without the work of many dozens of volunteers. Each school has coaches, teachers and aides who have taken on the extra work of coaching their school's teams. There are the event coordinators and judges, experts in their different fields who design and conduct the competitive events. There are the many others who tabulate the results and organize the food and equipment for the other volunteers. There were hosts for the museum tours and planetarium shows. The picture below from the morning meeting gives a small hint of how many people are involved.
I can't end this without mentioning our campus Geology Club. They were out in force today running a barbecue selling "Brontoburgers", "Fernburgers", and "Raptor Dogs" to the hungry kids. They were raising money to help anthropology and geology students attend our summer field studies course this year. 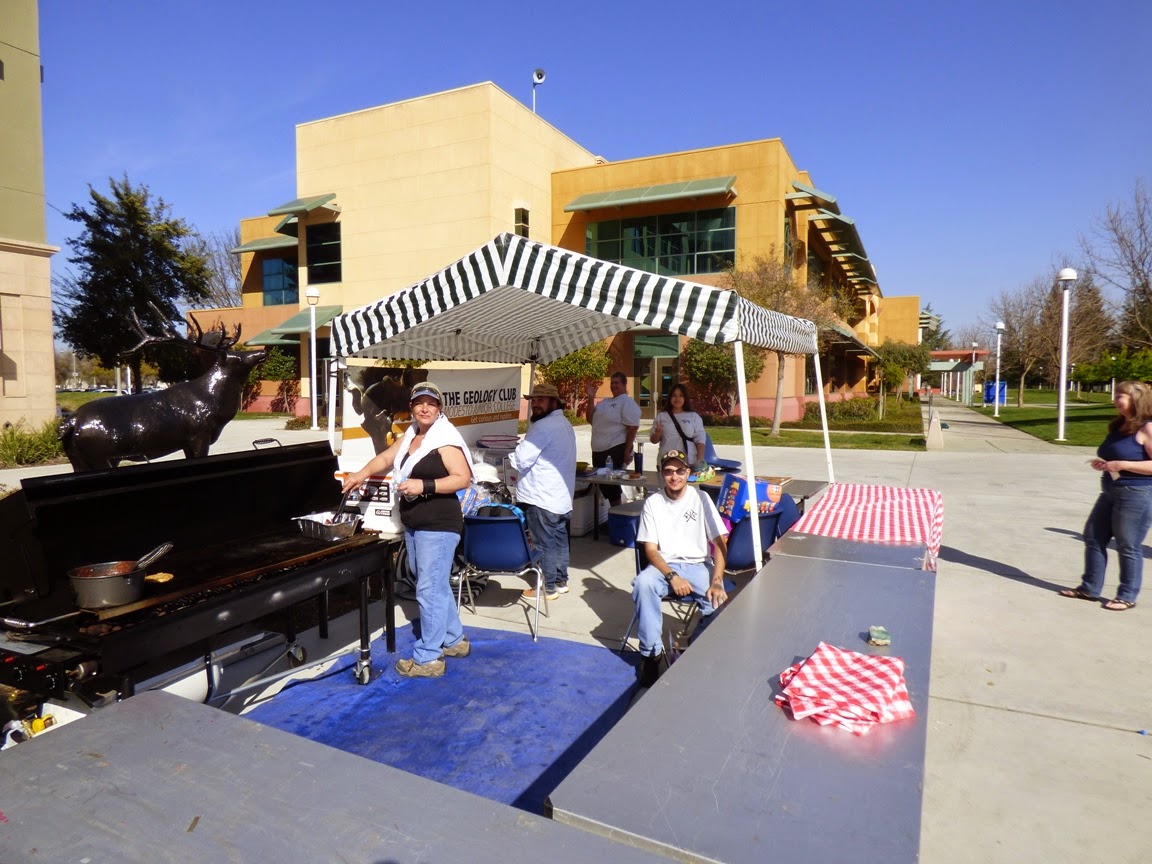 I'm so proud of my school and community, that they continue to sponsor the Science Olympiad year after year, despite recessions and limited resources. The county office of education continues to devote resources to the event as well. Do I sound like a cheerleader? I am. If we are to provide for a secure future for our county, state and country, we need to promote and encourage events like this. I was glad to be a part.
Posted by Garry Hayes at 9:25 PM

It was truly gratifying to see so many kids taking an interest in science! Hopefully we get more next year!