Time Beyond Imagining - A Brief History of the Colorado Plateau, Part 5: Seeing Red 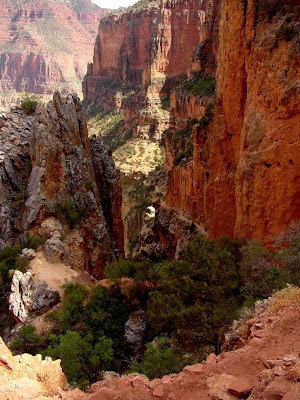 Well, not exactly seeing red; it is more like seeing gray (I'll explain in a moment). The Redwall Limestone is one of the most prominent layers in the Grand Canyon, forming 400-500 foot cliffs almost anywhere that it is exposed (and in the Grand Canyon, that would be everywhere). It exerts a huge control on human access to the inner gorge of the park; literally all trails are located on the basis of how they can surmount or circumvent the Redwall cliffs (usually where a fault or joint system cuts through the layer).

The Redwall Limestone formed in Mississippian time, around 330-340 million years ago. The lime formed in a shallow equatorial environment. Rocks like it are found all across North America, the result of the spread of one of the greatest of the Paleozoic epicontinental seas. Fossils are extremely common, including brachiopods, bryozoans, corals, sponges, nautiloids, and fish. The rock is generally gray in color; the characteristic red color comes from seepage of iron oxides from the overlying Supai Group.

As I have noted in previous blogs, I became a geology major largely as a result of a 1976 field trip into the canyon. The Redwall Limestone loomed large on that journey. Really steep and TALL! Water sources were widely separated, and we loaded up more than a gallon apiece at a spring at the base of the Redwall, since we would have none for the remainder of our journey out of the canyon. The climb up the cliff was tough, but along the way we explored a copper mine (my first time seeing azurite and malachite), and once we made it to the top of Horseshoe Mesa, we explored a pair of limestone caverns (complete with ropes and helmets that we had dragged during the entire journey).

The caverns were another geological revelation to me. Who knew there are hundreds and hundreds of caves in the Grand Canyon (besides a number of geologists and spelunkers)? But there are! Even in Mississippian time, sinkholes and caverns formed on the surface of the Redwall. The sinkholes filled with sediments from the overlying formation, and indeed an entire formation went unnoticed in these sinkholes right up until the 1980's (the wonderfully named Surprise Canyon Formation).

The caves that are open to exploration today formed much more recently, when the groundwater table was higher, around the time that the canyon itself was being carved. Rather few of the caves are actually accessible to people on foot. Most often, the caves open out as alcoves at the top of the Redwall cliffs, and are easily visible from most points on the rim. Some of the caves were accessible to Pleistocene mammals, and at least one of the caves was full of ground sloth droppings (a precious scientific resource that got burned up a few years ago).

A final note, about caves. Publicity is the death knell of a cavern. I made it back to that cave on Horseshoe Mesa about 25 years later, and it was a mess, not much more than a featureless hole in the ground. It may be that I didn't get into the back reaches that I remembered, but every visit to a cave does damage, and this one has sustained a lot. Take care when in caves; they can't be fixed in our lifetimes.
Posted by Garry Hayes at 9:53 PM

I'm enjoying these posts ... are you going to put these in a book someday?