Do you have a Photographic Memory? 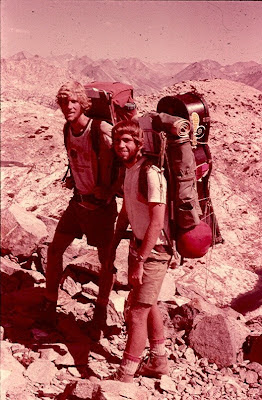 I do. But not in the normal sense of the word. I forget most things in my past, but those old memories are reawakened by looking at photographs taken at the time. The most vivid example came to me early in life, in my mid-twenties. As a reward for actually graduating from high school, a friend and I walked the John Muir Trail along with some side trips during the summer of 1975 (and unfortunately a few short months before taking my first class in geology). Five or six years later, I decided that the trip, which I consider one of the pivotal events of my life, should be preserved as a written memory.

As I started to describe the trip, I realized that huge gaps existed in my memories, and since I had only five rolls of Instamatic film (remember those cameras, older people?), I was only taking two or three pictures a day. But those pictures were the key to my unlocking the memories. I only wish I could have taken more. So much has been lost.

As such, I came across an older post on saving older pre-digital age photographs by Dr. Jerque at Geologic Froth that deserves your attention. I have thousands of old slides that I never have the time to peruse, and the good doctor makes that point that it is a lot easier to look at digital images than it is to pull up slides and run them through a projector or screen tray.

Today's picture? The gawky teenager on his first major expedition into the Sierra wilderness, just few months before his entry into the world of geology. The moments we wish we could get back....
Posted by Garry Hayes at 11:10 PM

"That's a great post. Here's a website on developing
photographic memory. Check out the tips that they offer. They worked pretty well for me. It's at http://www.photographic-memory.org"