Time Beyond Imagining - A Brief History of the Colorado Plateau, Part 3: LIFE! 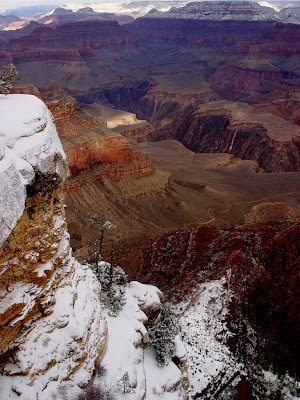 Fossils! Do you remember that first moment that you found a fossil as a child? Or did you never have that experience? I vividly remember exploring a meadow on the Kaibab Plateau north of the Grand Canyon as a 10-year-old. I didn't know what they were at the time, but later learned that they were disks from crinoid stems and sponges from the Permian seas 300 million years ago. I was impressed; I was not even disappointed that they weren't dinosaurs. I can look back and see this moment as one of the seminal events that led to my choice of geology as a field of study.


All kids go through a fossil phase. I also know that most geologists and paleontologists simply never outgrew it. And so it is that today's post is about fossils. Particularly the earliest complex life that evolved on our planet.

600 million years ago (give or take, what's a few million years between friends?), the continents of the world were in the process of splitting and breaking up. Many laypeople have heard of Alfred Wegner's Pangea, but we are not talking about that particular supercontinent (although we will in a later post). The continent that existed around a billion years ago has been named Rodinia. Such continents seem to be unstable, perhaps due to the buildup of heat from underneath. The land is pushed upwards in vulnerable places, the continent splits, and new seas are formed. As the continents move further apart, they subside and the shorelines around the margins of the continent invade the land. All over the world, the seas were transgressing across continental surfaces, forming shallow epicontinental seas (I am guessing that Hudson Bay comes closest in today's world as an example).


The split in North America cut across the southeastern part of California, and through central Nevada. During the Cambrian Period, the transgressing seas covered most of the southwest, with the exception of a portion of Utah called the Transcontinental Arch. The region was located close to the equator, so the ingredients were there for life: nutrients, shallow water, warmth. Life was about to get a whole lot more complex than the single-celled organisms that had existed for billions of years. The details are for other experts to describe, but multi-celled life appeared, and thrived.


Look at the picture of the Grand Canyon. Down in the depths there is a prominent terrace called the Tonto Platform. The platform exists because the Bright Angel Shale cannot form cliffs for very long, being easily eroded. Just below lies a cliff of Tapeats Sandstone, and above are a few slopes and ledges of the Muav Limestone. These three formations, sand, shale and limestone, record the invasion of the shallow sea across the Grand Canyon region.


Pick up enough fragments of the Bright Angel Shale, and you may be lucky enough to find the signs of the explosion of life that swept across the planet around 540 to 500 million years ago. Worm trails and burrows are plentiful, but the prizes will be the discarded exoskeletons of trilobites.


Trilobites are arthropods in the same phylum as the insects, crustaceans, arachnids and other jointed-legged creatures. Because they were one of the first animals to possess a hard shell, their fossils tend to dominate the fossil record, even though a large number of soft-bodied animals were doubtlessly around (see one of my first posts). They walked and burrowed in the sediments of the ocean floor; some grazed on algae, some were mud processors, some may have been predators. They ranged in length from a quarter inch to one monster that exceeded three feet in length. Their closest living relatives are probably the horseshoe crabs (see this NOVA geoblog article). Some were capable of rolling up like pill-bugs to protect themselves. They grew by molting, so not every discovery is a dead creature, simply a cast-off shell.


Other early creatures included brachiopods, sponges, and strange cone-shaped archaeocyathids, which may have been distantly related to corals. 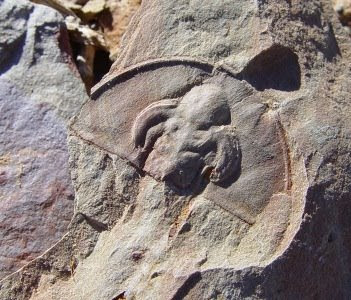 That's a nice one! Is that from the Bright Angel Shale? And did they live into Muav Limestone time? I didn't even know to look for trilobites down there!

A kind of disclosure about the trilobite...it is actually from the Carrara Formation in Death Valley, which correlates to the Bright Angel Shale. I have also recently found some trilobites at Frenchman Mtn in Las Vegas, in the Bright Angel Shale (but no good pictures), but I haven't been in the Tonto Group in the Grand Canyon in a couple of decades, except once, and I was not at all feeling like stooping over and hunting fossils at the time!