Feeling a Bit Sheepish: A Bit of Glacial Mutton in the Sierra Nevada

Sometimes glacial terms represent some kind of logical relationship to reality. "Horns" that are sharp pointed glacial peaks, "cirques" that are circular-shaped glacial bowls, "glacial polish" referring to rock worn smooth by glaciers, or "moraine lakes" that are lakes dammed by glacial moraines. Then there are the others: tarns, eskers, kettles, aretes, and cols, the kinds of terms that cause misery among my first-year geology students. But one term seems to depart from all reality...roche moutonnée
The term roche moutonnée describes an asymmetrical glacially scoured rock outcrop that has a smooth slope on the side facing the flowing ice, and a steep cliff on the side where the glacier pulled away from the outcrop ("stoss and lee structure" is a related term). The scale can range from a few meters to many hundreds. They are common features in regions of bedrock that have been scoured by massive continental ice sheets, but are a bit less common in mountainous areas eroded by alpine glaciers. These glaciers are the kind that filled valleys, but didn't overwhelm the surrounding peaks, such as those that flowed through most canyons of the Sierra Nevada. Yosemite Valley is the most famous, but glaciers filled dozens of other major river canyons from south of Sequoia National Park all the way north to the Lassen Volcanic National Park region. At their height, these glaciers covered about 30% of the mountain range.
The Tuolumne Meadows region of Yosemite National Park was an odd exception to the usual Sierra Nevada glaciers. The area surrounding the meadows was covered by a 2,000 foot thick mass of ice that was far more like a continental ice sheet than an alpine glacier. The ice spilled over ridges into several other drainages, including that of the Merced River, which carved Yosemite Valley. The addition of ice from the Tuolumne drainage gave the Yosemite glaciers an extra bit of "oomph", allowing them to erode deeper and farther than they would have otherwise.
There are numerous roche moutonnées in the Tuolumne Meadows area, including the easily seen Pothole Dome (first picture of this post), and Lembert Dome near the Tuolumne Meadows campground (below). The summits of each are easily climbed (from the right direction, anyway), and both provide stunning views of the region. 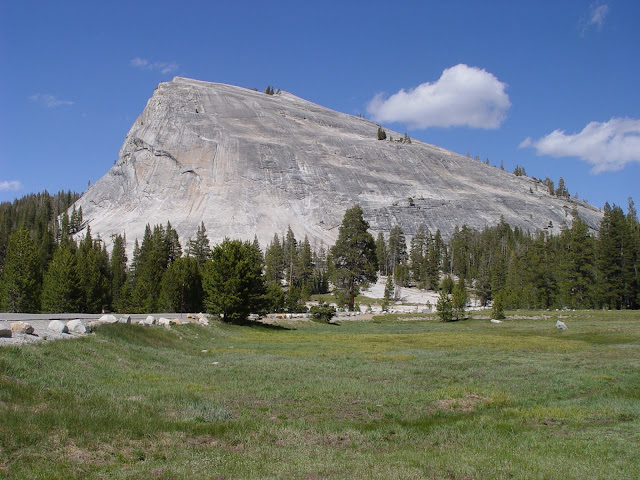 The problem with roche moutonnée as a geological term is that we geologists can only barely agree on its meaning. It's derived from French, and the "roche" part isn't a problem. It means "rock". But "moutonnée" is the tricky one. It can be translated loosely as "sheep" (think "mutton""), but not exactly (French: "mouton"). Moutonnée (with the extra e's) translates to "frizzy", and is taken as a reference to sheep's wool. The term originated in the 1700s with a naturalist named Horace-Bénédict de Saussure (it would be decades before the term "geologist" was coined) who noted that the rocks looked like a type of wig apparently well-known at the time whose locks were held in place with mutton grease. Except that there seem to be few or no references to wigs that were actually called that (the closest version was a tête de mouton). 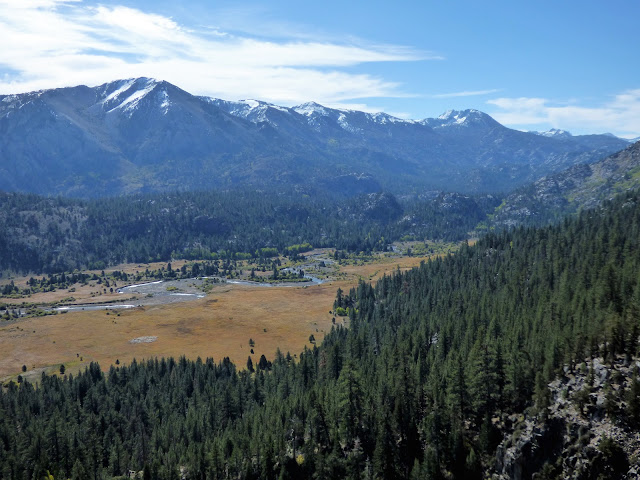 A few weeks back we were on our field studies trip to the eastern Sierra Nevada, and we descended from Sonora Pass into the drainage of the West Walker River at Leavitt Meadows. I was describing various glacier features and even mentioned the presence of a few ill-defined roche moutonnées upstream of the meadow. You can see them in the picture below. But then I noticed something else in the midst of the meadow. I saw them, and now you are hoping that Geotripper won't go there, but he will... 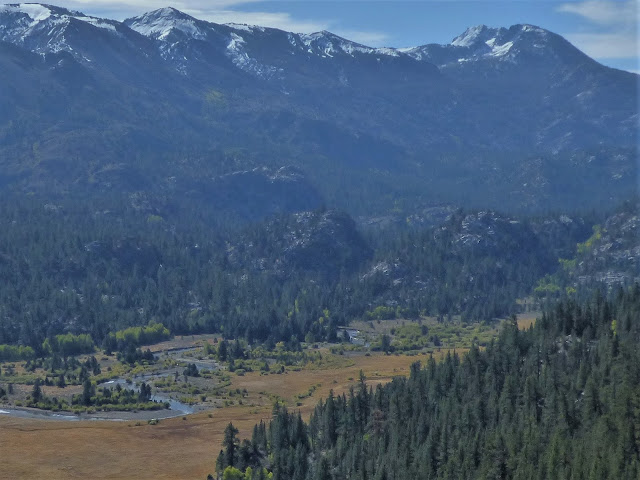 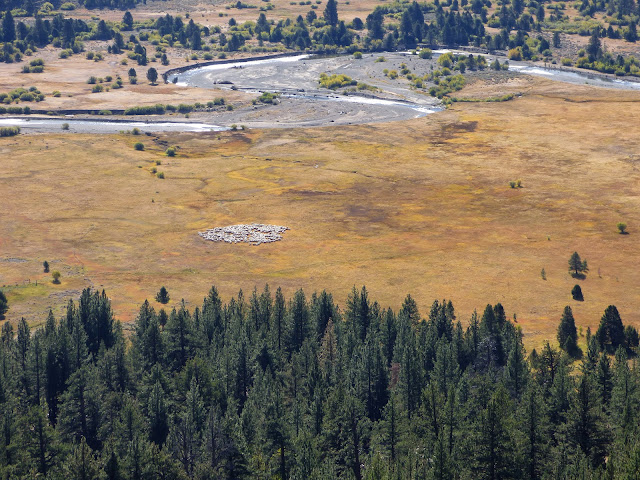 But I still don't think they look like eroded glacial domes. 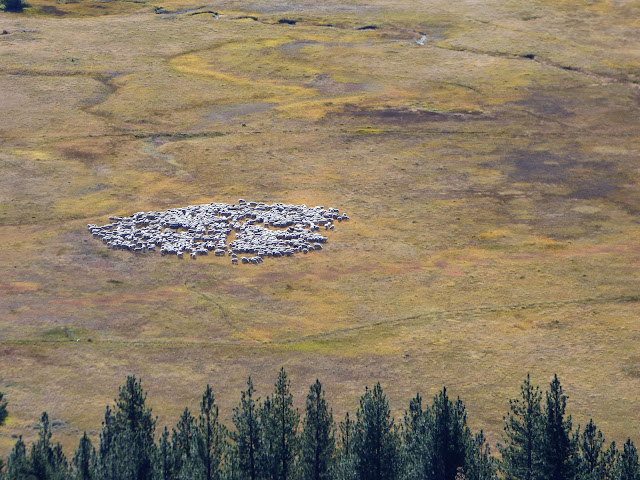 For an excellent description of the derivation of the geologic term, check out this great story from the Atlantic.
Posted by Garry Hayes at 11:12 PM