Volcanoes in Hawai'i: Rock Finds a Way (to destroy life)


My last entry on the geological drama of Hawai'i concerned the stubbornness of life in a harsh volcanic environment, such as that which is found on the highest slopes of Mauna Loa and Mauna Kea on the Big Island of Hawai'i. I was echoing of course one of the memorable lines from the movie "Jurassic Park". As I started to review my next set of pictures from my recent trip, I realized the opposite supposition also holds true: rock finds a way (to kill life).
Now obviously, it couldn't be clearer that lava destroys life as it flows through and burns forests. The aftermath of many a flow is a barren plain with no sign of life of any kind. In the tropical climate of Hawai'i, life returns quickly as wind and water aid in the propagation of seeds from the nearby forest. Sometimes it is bird droppings that scatter the seed and provide the first nutrients that lead to a rebirth of life. The surface of the Big Island gets made over repeatedly over the millennia. 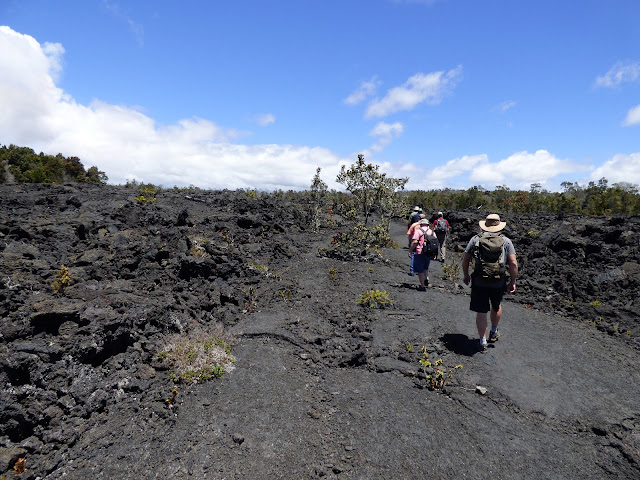 The battle between rock and life does take unusual forms sometimes, which is what I wanted to illustrate in today's post. Basaltic lava is not always the all-consuming fiery hell we often take it to be. It may be in excess of 2,000 degrees Fahrenheit (1,100 degrees Celsius) as it flows from the vent, but when the lava encounters cold objects, the surface of the lava can freeze quickly. When the object is a tree, strange things can happen. 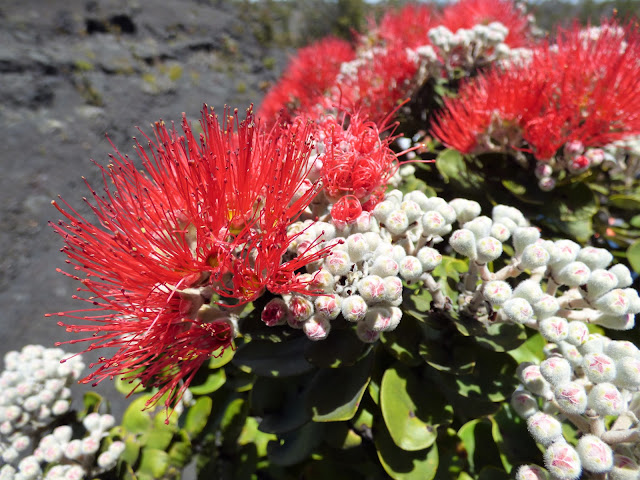 On the slopes of Kilauea or Mauna Loa, the most common tree is the Ohi'a, which I wrote of in the previous post. In 1974, the Keanakāko‘i flow overwhelmed an Ohi'a forest near Chain of Craters Road in Hawai'i Volcanoes National Park. The lava froze around the trunks as the trees themselves caught fire and burned away. 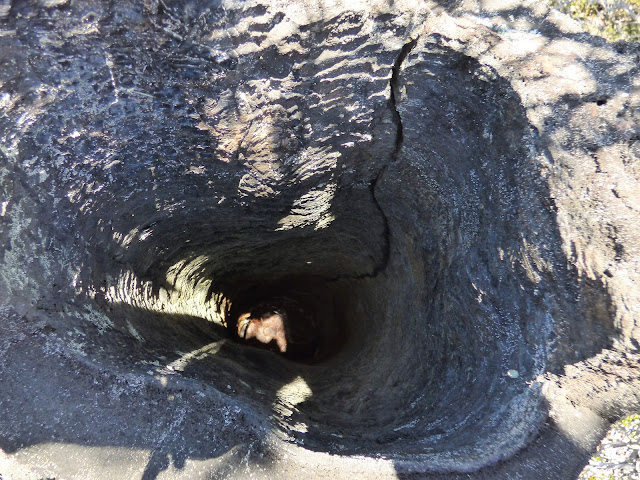 The resulting cavities are called tree molds, and they were spread widely in the Keanakāko‘i flow. The charcoal from the former tree can still be seen in some of the molds after forty years (below). 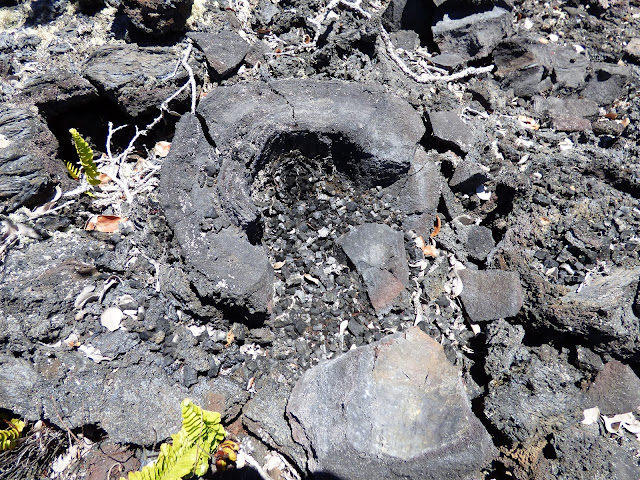 At times, the molds perfectly preserve the pattern of the bark, as can be seen below. 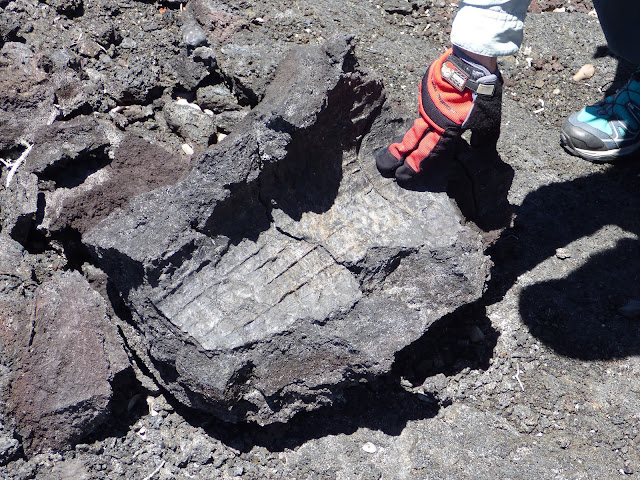 There is another odd phenomena that occurs in these events. The lava flows past the trees, solidifying around the trunk, and continuing on. It's not always obvious, but as lava flows by, the thickness can change, and the level of the flow can drop around the trees. The tree molds are left behind as towers of basalt with hollow centers (lava trees). It's actually kind of eerie to encounter such ghosts in the midst of a living forest (below), and easy to understand how ancient people considered these to be people turned to stone by the gods. 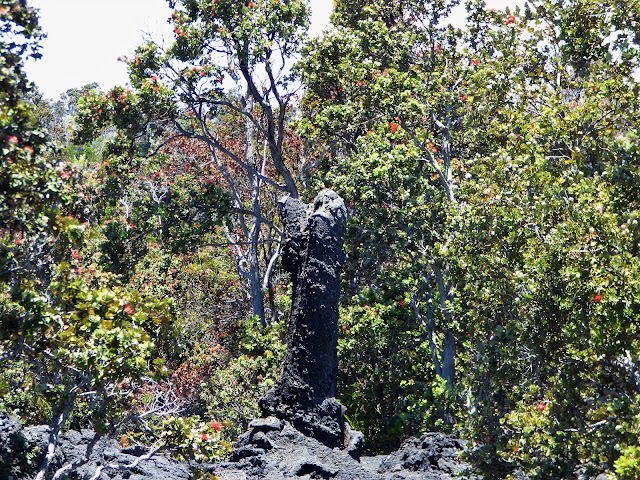 The 1974 has hundreds of these lava trees, and some take bizarre shapes, as in the case below, where a multiple-trunked tree (or a clump of several) was preserved. 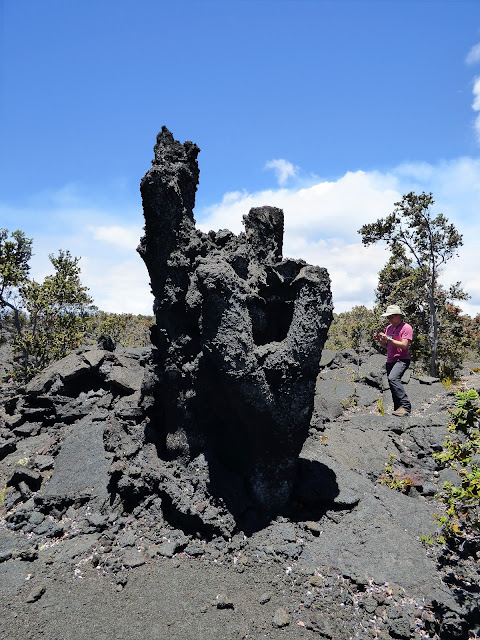 It's obvious that life is slowly being reestablished on the flow, as we were surrounded by Ohi'a trees and other species at various stages of growth. 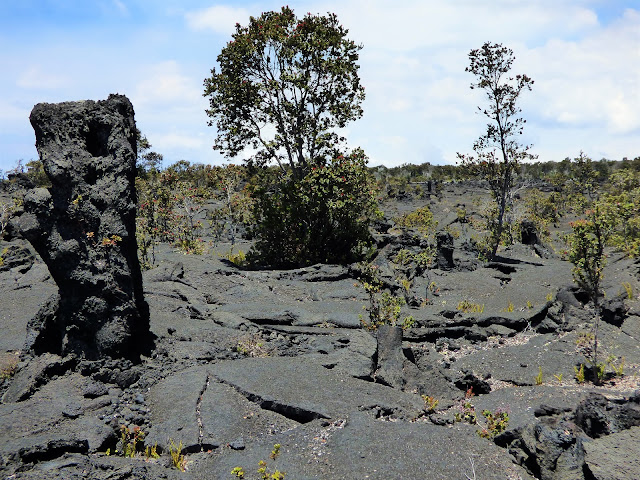 It turns out that the tree molds themselves offer a hospitable environment for life, with nutrients provided by the charcoal, and cooler wetter conditions below the surface. 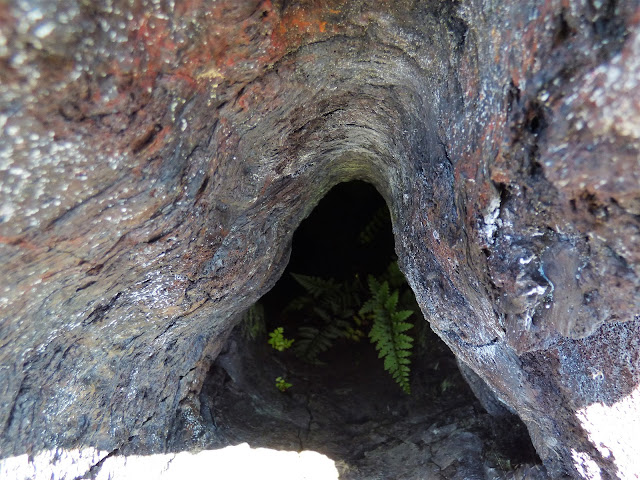 The lava forests can be seen in several places. By far the easiest is at Lava Tree State Monument in the Pahoa area. It resulted from a flow in 1790, and the park offers paved accessible trails and interpretive signs. If you want to see the Keanakāko‘i ghost forest, you'll find it in the vicinity of Lua Manu Crater on Chain of Craters Road in Hawai'i Volcanoes National Park. There are no signs and no trails, so you are in for a bit more of a rugged adventure. Be prepared with water, sturdy shoes, and the other usual things you need for a wilderness outing. And...be careful while studying the ghost trees. Many are unstable and fragile and could be destroyed by a thoughtless climb or push. And having one fall on you can't possibly end well. 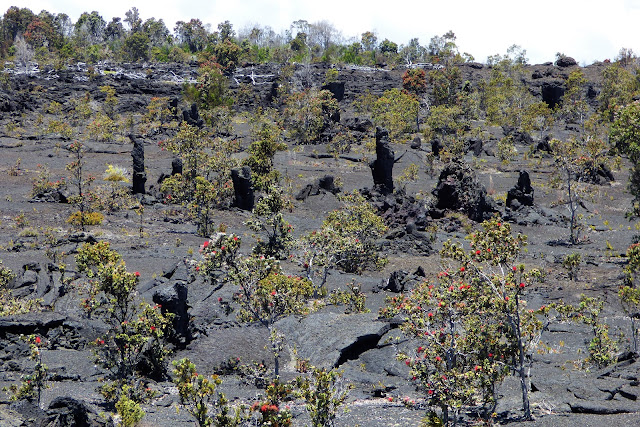 Wow. I've never seen or heard of that before. Thanks!