Oh the Things We Do For Love...Thursday's Fun Foto Explained 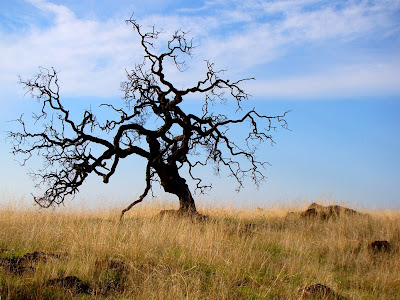 Thursday's Fun Foto was taken during my brief Veteran's Day exploration of the Sierra Nevada foothills along Merced Falls Road. The area near the road is a deeply eroded and weathered landscape of metamorphic slate and greenstone dating to Jurassic time. The soils support grass and the occasional oak tree, and is an excellent environment for the star of our fun foto, the California Tarantula. We must have some arachnophiles out there because the guesses zeroed in on spiders. Our Sierra foothills are prime habitat for these huge arachnids. 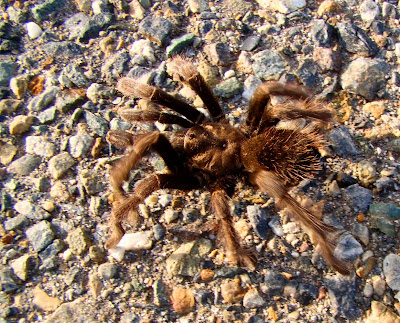 The females spend most of their time in burrows waiting to ambush their prey, which consists mostly of crickets. They can live as long as 20 years. The males have it a bit tougher...their hormones, or whatever, cause them to emerge in September and October to seek mates. They are exposed to plenty of danger at this time, including the tarantula wasp, which likes to inject venom into the poor spider, paralyzing it, and making it into a food source for the egg the wasp lays in it. If the male finds a willing mate, he also has to keep from becoming a meal for the female if times have been lean. All in all, the males are lucky to live more than a few years.

As frightening and terrifying as they might appear, tarantulas rarely try to bite people, and even if they do, their venom is so weak that most people feel nothing worse than a bee sting. They are generally docile and would rather retreat from confrontation. They are also rather delicate; one source I ran across mentions that a fall of six inches can injure them while a fall of twice the distance can kill them.

One other sight during the afternoon was an interesting convergence of a number of road signs. Not really very geological, like those at Andrew Alden's site, but kinda funny. I expected to see the Roadrunner pass by with Wily E. Coyote in hot pursuit... 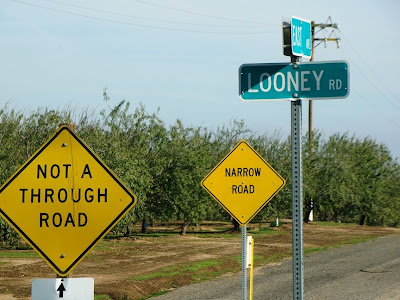 "They are exposed to plenty of danger at this time, including the tarantula wasp, which likes to inject venom into the poor spider, paralyzing it, and making it into a food source for the egg the wasp lays in it."
Wow, the insect world is a truly horrifying place. During the first clause, I was rooting for the wasp, but after the second, not so much. I'll never complain about the bar scene again!

I love tarantulas. I'm presuming that the September-October time is when it looks like masses of tarantulas are "migrating" across roads in places in the foothills.

Great
Work
Tank you for sharing