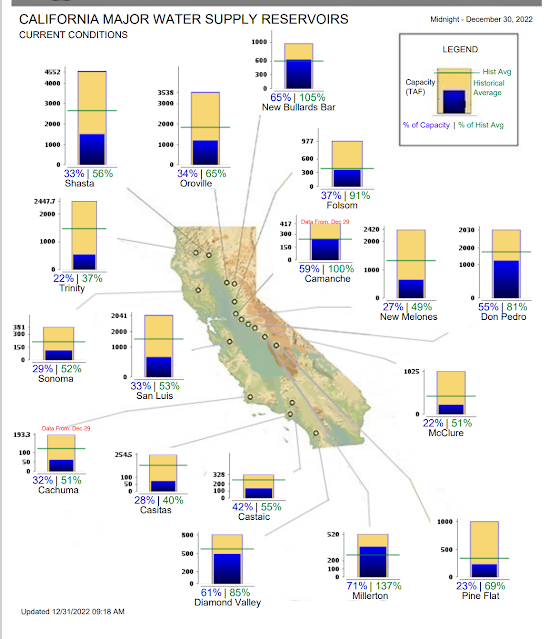 It's the last day of 2022, and the third year of a stunning drought in California. It's been raining pretty much across the state during December, and there are hopes of alleviating the drought a bit. Let's hope so. The map above from the California Data Exchange Center gives a pretty clear idea of the situation. Reservoirs across the state are for the most part well below normal, and in the case of the biggest (Shasta, Oroville, etc.), still ominously low. I hope to revisit this diagram in a few weeks and see some changes, but we will see.

The long-term predictions earlier this year were for a continuation of dry conditions, so the current onslaught of atmospheric river storms is somewhat of a surprise, albeit a welcome one. But of course, one has to be wary of what one wishes for. There are flood watches up all around the state as one more storm will blow through to end the year.

There is also the cautionary tale of the previous rain year. We had some record storms in October and December last year, and things were looking great, but then January and February were about as dry as can be. I recorded a mere 0.08 inches in those two months.

Still, this year has some promise. From the weather station in the Geotripper backyard 13 miles east of Modesto, we've had 7.14 inches of precipitation in December, the highest total in the 32 years that I've been keeping statistics (I've recorded more than 5 inches in six different years, but never more than 6). Even with the earlier dry months, we should round out 2022 with about 8.6 inches as we move into the critical months of January and February when most of the precipitation should happen.

Despite the rain, I felt a need to check out our local barometer of runoff conditions. The Tuolumne River cannot serve in this capacity because of the numerous reservoirs upstream that very carefully control the daily flow levels. I checked instead at Dry Creek, of which there are many in California. This particular Dry Creek has its headwaters in the lower foothills of the Sierra Nevada Mother Lode, and flows for about 40 miles before joining the Tuolumne River in Modesto. Ironically, there is almost always some water in Dry Creek, obviously from rain runoff during the winter season, but also from irrigation overflow during the dry summer months. Without any substantial flood control structures, it is a good measure of runoff conditions during storms. 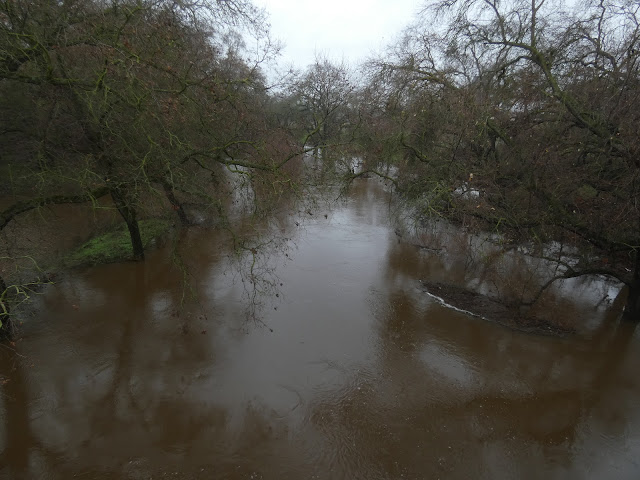 The creek was running about 600 cubic feet per second when I got this picture, which is about twice the current flow of the reservoir-controlled Tuolumne River. As can be seen from the discharge graph from the USGS Water Resources site, it has already been well over 1,500 cfs a couple of times in the last week. I haven't seen this much water in the creek in a couple of years. 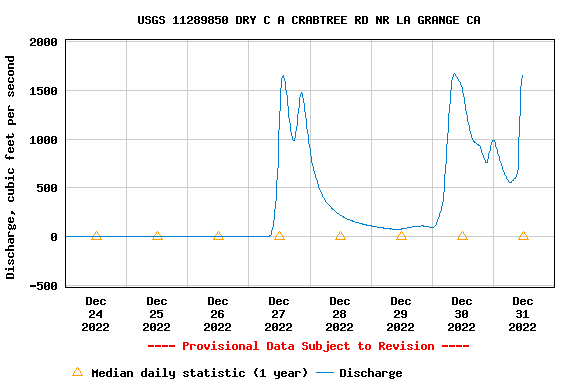 Of course, the local picture is not the most important statistic. Everything in California's water infrastructure depends on the snow conditions, especially in the Sierra Nevada. Although these atmospheric river storms we are experiencing derive from tropical sources and are warmer than we might want, the current snow conditions are promising. Check out the report: 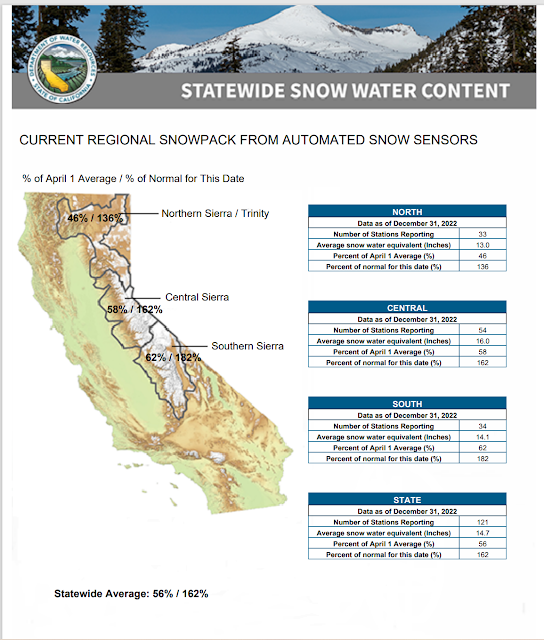 Let's hope this keeps up. A lot of forests, rivers, animals and people are depending on it.

We are decent water wise here in eastern PA. We managed to dodge much of the short term drought conditions, but not all, and now are at just above our normal precipitation for the year of 40 in.

The kicker is the temps are way too high for this time of year with 50's and 40's predicted for the upcoming week.