Exploring One of the World's Largest Volcanic Eruptions...Ever. And a Problem: Stuck Between a Volcano and a Hard Place

I've been more and more concerned about the public damage being done to the scientific community and larger society as politics has swirled like a tornado around global warming, climate change, and pandemics. Trust is eroding in some quarters, and I only see this leading to worse disasters in the years to come (and really, nearly a million Americans dead is a huge disaster, even though it unfolded slowly over two years; just imagine the impact if those people had died all on one day). This damaged social compact between those who do science and the society at large reminded me that it isn't the first time this kind of issue has affected the public, and a few years ago I wrote about it in a two-part series. Here, with some modifications and updates, is part one. 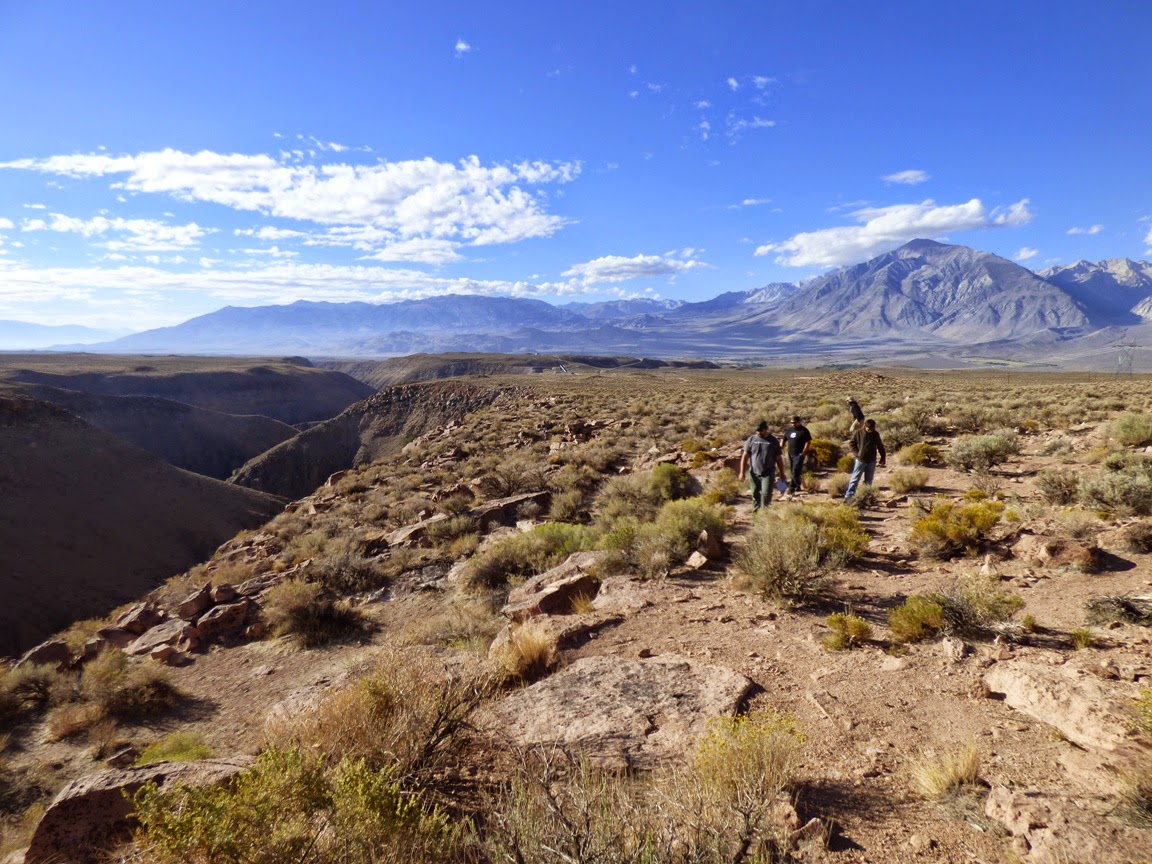 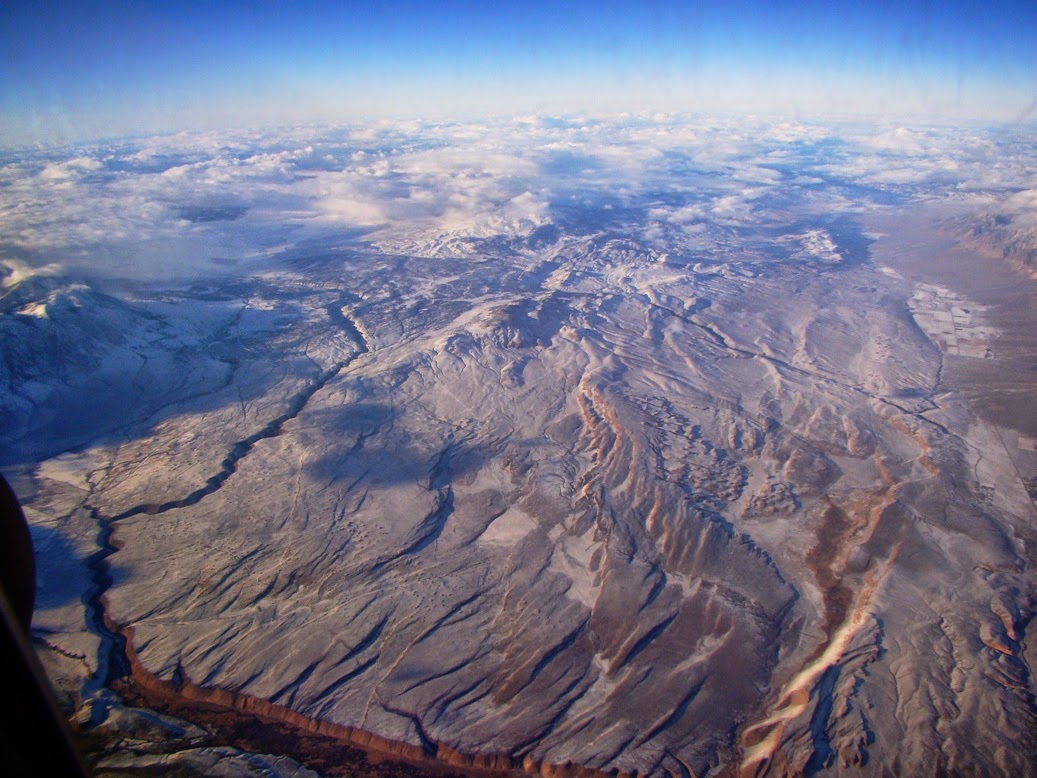 For me, it took an overflight at 30,000 feet to even begin to see the full scale of the blast. Just about all the landscape in the picture above is covered with volcanic tuff. A freeway climbs the slope on the left side of the picture but is barely visible. I've added labels in the picture below to highlight the location of the caldera, which was obscured by clouds 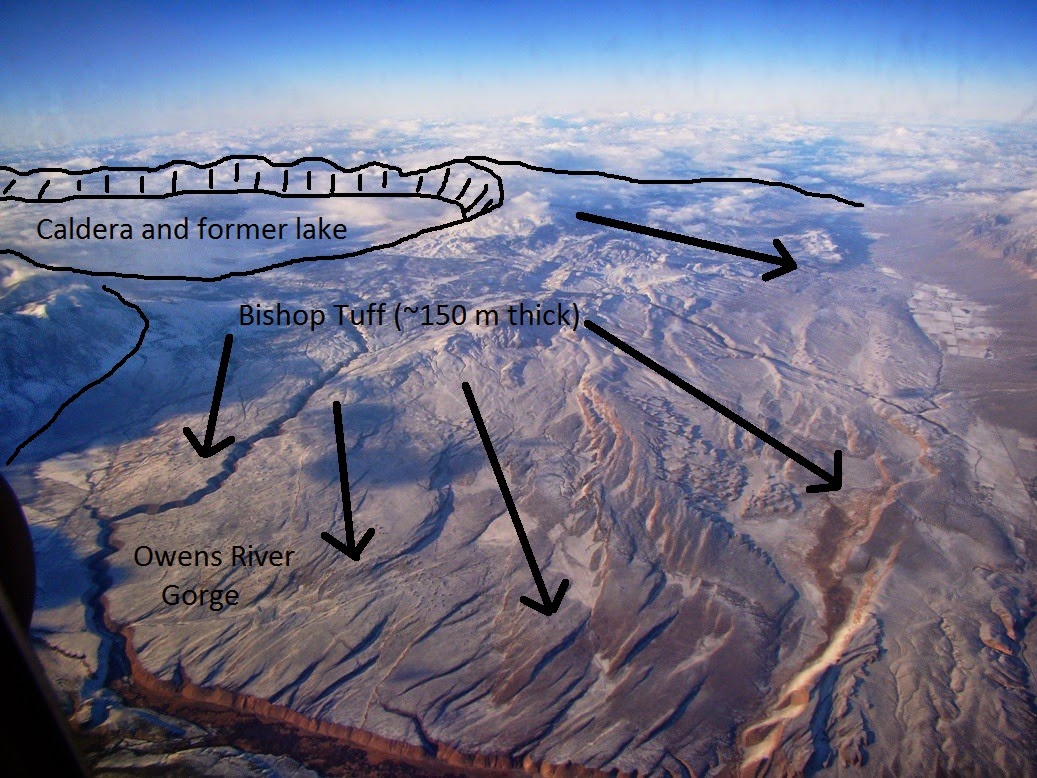 Our field studies trip took us down the Owens Valley and some of the lands east of the Sierra Nevada crest, including this gigantic hole that actually breached the mountain wall. The lower section of the crest allows Pacific storms to blow through, dropping prodigious amounts of snow, especially on Mammoth Mountain, a volcano that developed on the edge of the caldera thousands of years after the climactic blast. Many thousands of years later, it was decided that this was a perfect place to put a ski resort.
The caldera filled with water, and for thousands of years there was a lake. Eventually it breached the south edge of the caldera and drained. The resulting Owens River carved a 400-foot-deep gorge in a short period of time (above), and the canyon walls provide a marvelous cross-section of the strange volcanic rock.
The caldera is a stunning place to visit and contemplate, but that's not actually the story I tell my students on the first day of most of my classes. The story concerns an incident at Mammoth Lakes dating from the early 1980s which still has huge implications in the present day. It's about civic responsibility and public safety in the face of deadly geologic hazards, and how geologists found themselves stuck between a volcano and a hard place. The purpose of telling the story to my classes is to highlight the danger of willful geological ignorance.

On May 18, 1980, Mt. St. Helens exploded with unexpected ferocity, killing nearly four dozen people. The U.S. Geological Survey was caught off guard in terms of predicting the moment of the eruption, as they did not yet understand the dynamics of Cascades volcanoes. Only a week or so later, a series of four magnitude 6 earthquakes struck the Mammoth Lakes region, injuring a number of people and causing several million dollars of damage. Many more earthquakes followed, and with the location of the epicenters being within the caldera, the geologists became concerned. They deployed more instruments in the region and discovered that the floor of the caldera had been rising, some 10 inches between 1979 and 1980. Even more disturbing was the discovery that the earthquakes were migrating, and becoming shallower, ultimately reaching a mere 7,000 feet or so beneath the surface. New steam vents were opening up (although geothermal activity has always been present). As I say to my students on their first day of class, "You've been geologists for 45 minutes now, what do YOU think was going on?"
The people of Mammoth Lakes apparently only knew that they were getting a lot of earthquakes. There wasn't a lot of communication between the geologists who were researching the increasing activity and the government and emergency personnel responsible for the safety of the community. I imagine that this occurred (and still occurs today) because of the vast amount of uncertainty involved in predicting geologic events. Who would want to go out on a very long limb and suggest that a town could be on the cusp of a very dangerous, even catastrophic event? There was a fairly recent case of geologists in Italy who were jailed because they didn't predict a deadly earthquake. 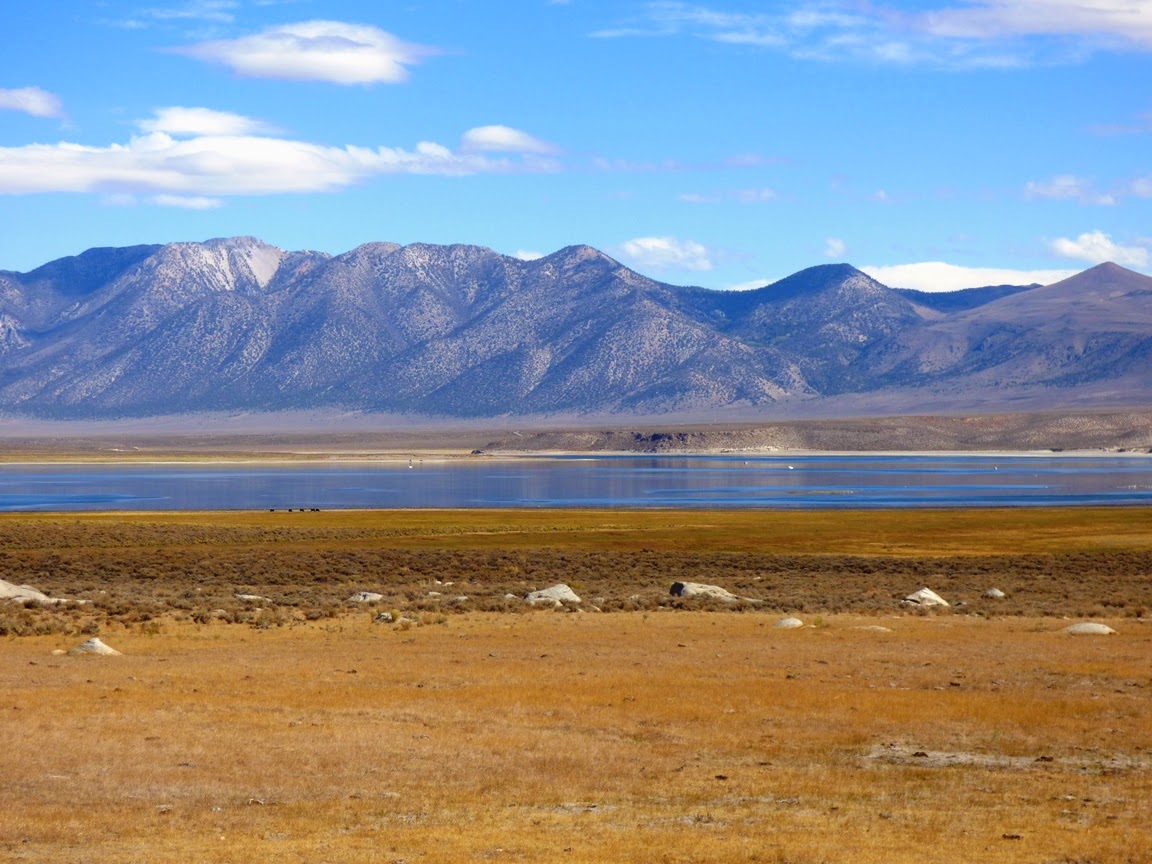 NOTICE OF POTENTIAL HAZARD-Information on the location and possible magnitude of a potentially hazardous geologic condition. However, available evidence is insufficient to suggest that a hazardous event is imminent, or evidence has not been developed to determine the time of occurrence.

Give it some thought...given the intense geologic activity, what would you do? Would you notify the civic authorities? Would you go to the media? Is it possible that the media might report the facts as they are known, or would there be a tendency to go overboard on their coverage? Keep in mind the difference between 1983 and the present day when numerous cable news networks have to keep talking 24 hours a day. Or alternatively, would you keep things quiet, and hope that the geologic activity would die down without any catastrophes occurring? What happens if you quash your findings, and an eruption takes place? What is your liability in the deaths and injuries that result? Is there an easy answer here?

Find out in part 2!
(You can read the original post from 2015 here: Geotripper: The Sierra Beyond Yosemite: Exploring One of the World's Largest Volcanic Eruptions...Ever. And a Problem)
Posted by Garry Hayes at 10:27 PM

A question ... I enrolled in an upper division/grad course on the Yellowstone volcanic system, which the syllabus claims produced "the largest eruptions" in North America in the past few million years. Hype? What about the Long caldera? Won't bring it up, but I'm curious.

Yellowstone scares me. If we go on Hazard Warning or maybe even Watch, I will pack up, head west, and move in with my relatives in Santa Maria (safe from Long Valley?)

Great post. I have saved it for the class on Predictability and Monitoring.

Thanks for the comment. I was careful to say "One of..." in my title because one of the Yellowstone eruptions produced four times as much ash, around 600 cubic miles. But Long Valley was still...very big! I'm struck that Yellowstone has not had an eruption of any kind in 70,000 years, but the Long Valley area (not necessarily the caldera itself) has had numerous eruptions in the last few thousand years, including a few only hundreds of years ago. They are both absolutely fascinating!

The Yellowstone Volcano Observatory(YVO)has some great information on the state of the caldera.

One of the big things is apparently the 2 magma chambers are less than 20% molten each:
https://www.usgs.gov/observatories/yvo/news/window-yellowstones-interior-part-ii-yellowstone-crust-mantle-volcanic

Also because the hot spot is being overridden by much thicker geology there may. emphasis may, be no more eruptions.

Thanks DSchwartz78 for this info.