Out on the California Prairies: Taking Stock of California's Most Powerful Storm Ever 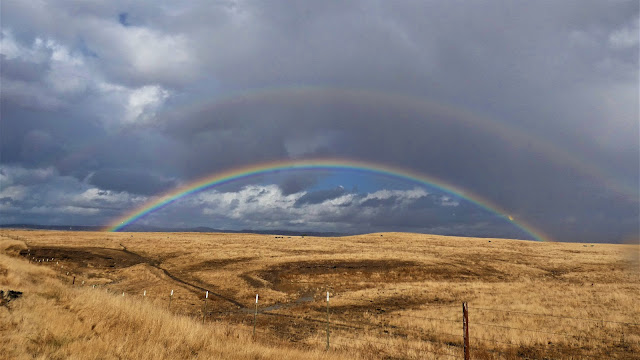 There are many ways to describe the power of a storm: monetary damages from flooding, rainfall totals, rise of reservoirs and rivers, and others. So one can argue about which particular storm was the most powerful to ever hit the state. I'm thinking especially of storms like those of 1861-62 that left much of the Central Valley as a vast lake for months, the 1997 floods that overwhelmed some reservoirs in the Sierra, or the 1969 floods that I experienced in Southern California. They were all devastating floods, and yesterday's storm won't be remembered the same way as these disasters, but in two ways this storm apparently was unique. 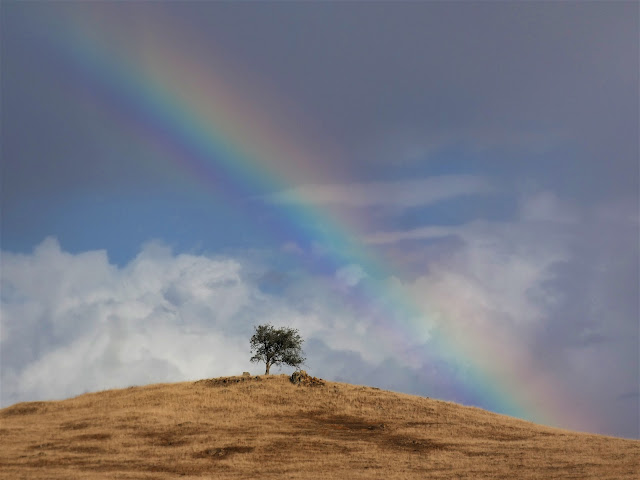 The storm was called a "bomb cyclone", a term that meteorologists apparently hate in the same way that geologists hate "supervolcano". In any case, the power of the storm lay in the intense low pressure cyclone spinning in the ocean offshore of California and the Pacific Northwest. The lower the pressure, the higher the pressure gradient force that controls wind speed. The pressure was a record 942 millibars, and this generated hurricane-force winds over the ocean. Inland, vegetation and mountains slowed the gales, but we still had a wild day in the Central Valley, with trees and telephone lines down.Storms can be incredibly powerful in terms of winds, but as I've discovered in Death Valley National Park, without a source of moisture, that will be it: powerful winds. But this storm tapped into subtropical moisture from the general vicinity of the Hawaiian Islands. This band of moisture, termed an atmospheric river, carries vastly more water than even the Mississippi. This stream of atmospheric moisture was pushed upward as it encountered the frontal system of the cyclone and it produced a prodigious amount of relatively warm precipitation. A number of all-time records for one day storm totals fell across the state, including downtown Sacramento, which got 5.44", breaking a record that stood since 1880. That represents 69% of all the rain the city received in the entire rain year 2020-21. Blue Canyon in the Sierra Nevada got 10.40", which amounted to almost a third of the entire 2020-21 water year.
I headed out onto the prairies of the Great Valley and the Sierra Nevada foothills this afternoon to see what the atmospheric storm did to the grasslands. My first stop was to check out the Tuolumne River at Roberts Ferry Bridge (above). The river hadn't changed much, as it takes time for the waters to gather the storm runoff and move downstream, but the river is also controlled by the huge dam at Don Pedro Reservoir, and they'll hold onto as much water as they can. It's currently at 48% of capacity, which is bad, but not as bad as most other Northern California reservoirs (Lake Shasta is at 22% or so). 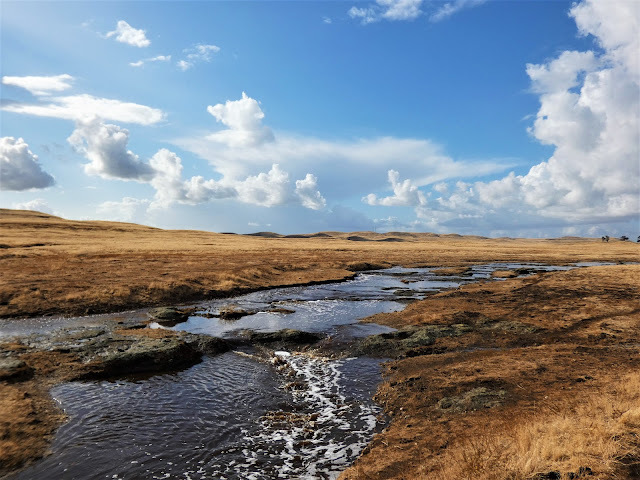 The biggest effect on the Tuolumne will be in downtown Modesto where Dry Creek joins the bigger river. Dry Creek is a normally...well...dry creek that has headwaters in the foothills north of Modesto Reservoir. It is undammed, so it can occasionally produce large floods that can back up into some residential neighborhoods. It had a minimal flow over the last few weeks of a few cubic feet per second. But I could see that a lot of water was gathering out in the prairie. The picture above shows one of the small tributaries to Dry Creek, and channels like this are present all over the region. By tomorrow Dry Creek may be flowing at close to 900 cubic feet per second. 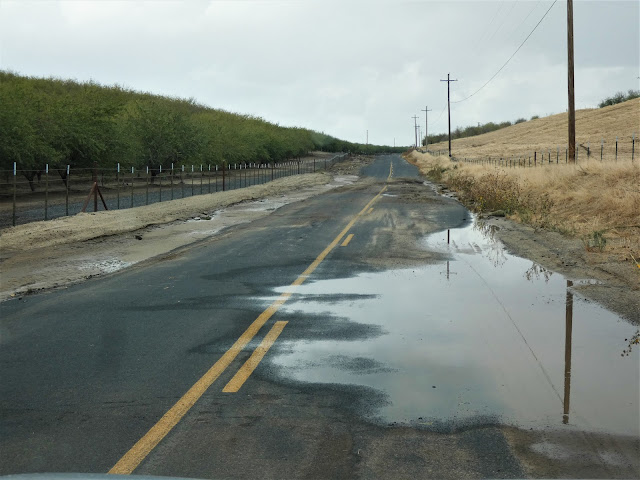 The prairie for the most part was certainly wet, but there were few visual reminders that a vast amount of rain had fallen overnight. The vernal pools held water and creeks were flowing. But little flooding and soil loss had taken place, with one glaring exception. Tens of thousands of acres of prairie have been uprooted to be be replaced by almond groves. These groves have been planted in nice neat rows up and down the hillsides, providing a convenient avenue for floodwaters to cause intense soil erosion. I passed numerous scenes like that above where mud from the orchards had flowed down the road. It's hard to believe in this day and age that the farmers would be making the kind of mistakes that led to the Dust Bowl in the 1920s in Oklahoma, Kansas and Texas. 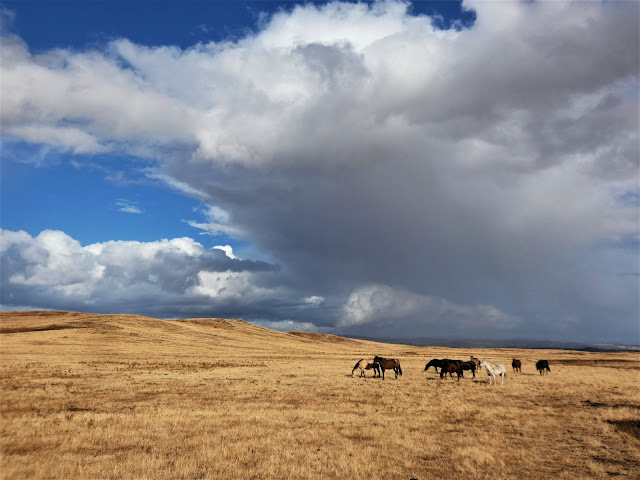 Away from the almond groves, the grass roots held the soil in place, and the water was infiltrating underground and flowing gently in the recently dry creek beds to gather and eventually drain into the Tuolumne River. The birds and other life seemed enervated by the moisture and were very active throughout the afternoon. I saw lots of Brewer's Blackbirds, Western Meadowlarks, Savannah Sparrows, Red-tailed and Ferruginous Hawks, American Kestrels, and Ravens. I loved coming across the small herd of horses; I was reminded that horses evolved on these prairies millions of years ago before migrating into Asia. They later became extinct here in North America only to be 'returned' by the Spaniards in the 1500s.
The final thought about today's storm is knowing that after the warm rains that snow would be falling in the high country of the Sierra Nevada. In the webcam from the Yosemite Conservancy we can see that upper Yosemite Valley is now mantled with the cold white stuff. Many wishes that this could be the start of a good water year with a chance to recover somewhat from our devastating drought. 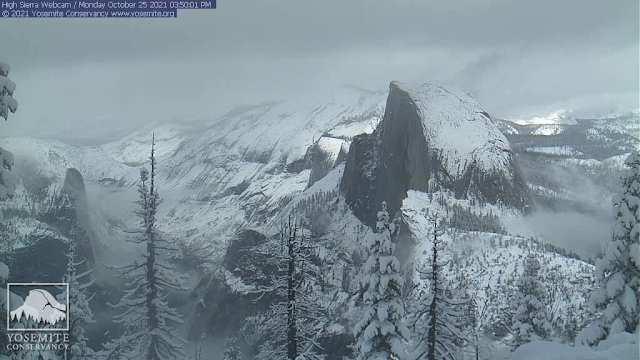 Great information and photos -- thank you!

For all your self-effacing comments about the great valley, you posted some beautiful photos

You captured that double rainbow, perfectly!