Doo, doo, doo, Lookin' Out My Backdoor: What to do when you're stuck on the couch on rainy day 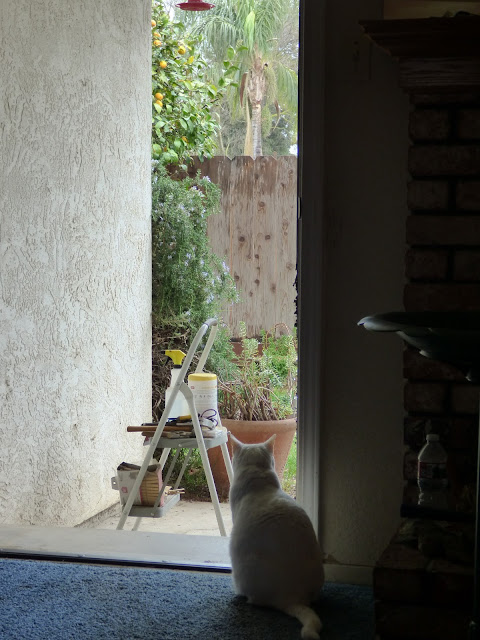 I have had few chances to write about my geological journeys for the last year, because there have been precious few geological journeys. Well, literally none. I'm blessed by having the Tuolumne River flowing by a half-mile from my house, and I'll spend a bit of time there almost every day exercising and searching out birds and other life forms. But rain turns the trail to mud, so I was pretty much stuck on the couch for the afternoon.

The rain has been rare this year, and the air outside smelled delicious (that's also truly rare in this valley). So the back door stood wide open during the afternoon while I sort of napped on the couch. But I kept the camera at my side. Who knows what could happen? 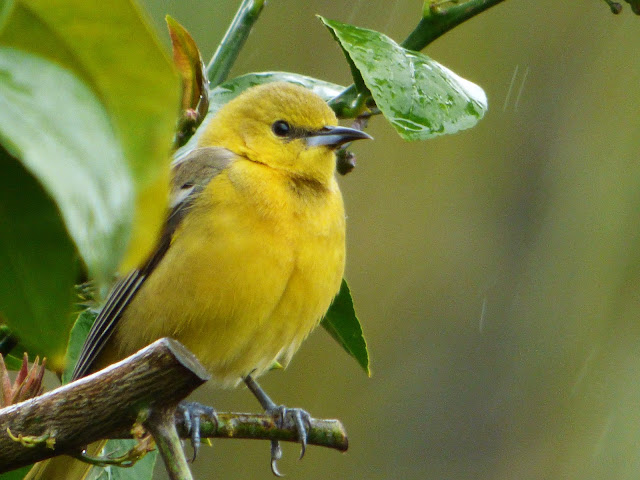 The main goal of the day was to catch a few pictures of our truly rare birds for this time of year: a pair of Hooded Orioles. They are tropical migrants, and so far this year only five have been reported on eBird in the entire San Joaquin Valley (there are more in Southern California and the central coast, as they are starting their northward migration). Our area used to be the northern boundary of their range, but with a warming climate and the planting of ornamental palms, they are found as far north as Arcata. They like the palms to construct their unique hanging nests, and as I've found, they love the sugar water in Hummingbird feeders. They've been coming by a dozen or more times a day, a male and a female, for a drink. Normally I can only take pictures through a window and blinds, but with the open door, I got some sharper images. The male is the brighter one with the black face and throat (below). 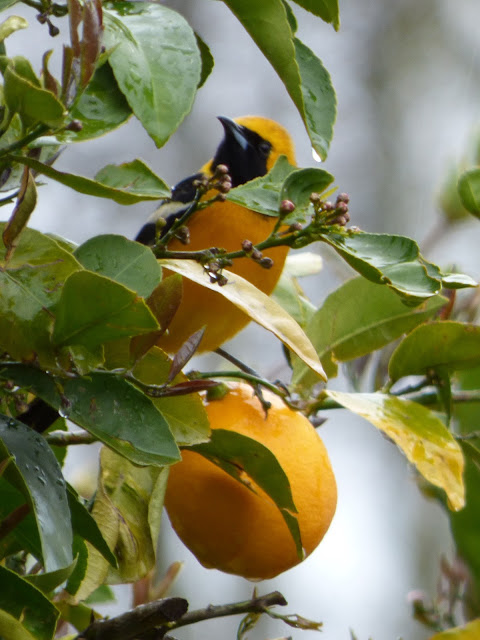 While waiting for another appearance of the Orioles through the narrow doorway, I saw fluttering in the far distance, about three backyards away. Zooming in I saw a flock of Cedar Waxwings. They fly through the neighborhood every so often looking for fruits, berries, and insects. I haven't seen any for a month. I must not have been looking... 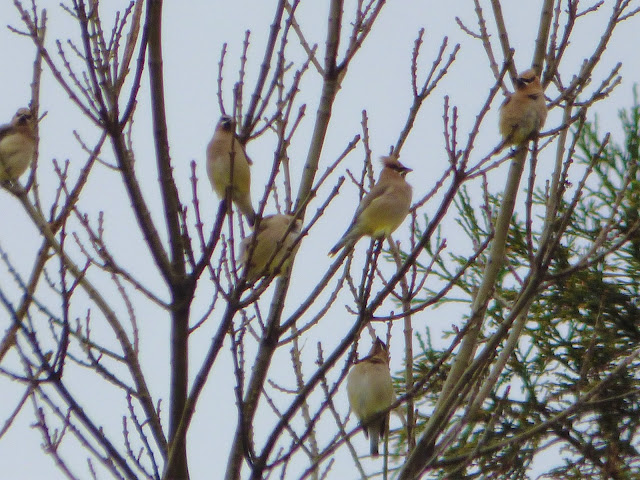 The Orioles aren't the only birds that like coming to a Hummingbird feeder. We have a pair of Anna's Hummingbirds that visited today as well. They are the only Hummingbirds who stay in our region through the winter. Black-chinned and Rufous Hummingbirds will be arriving as spring progresses. 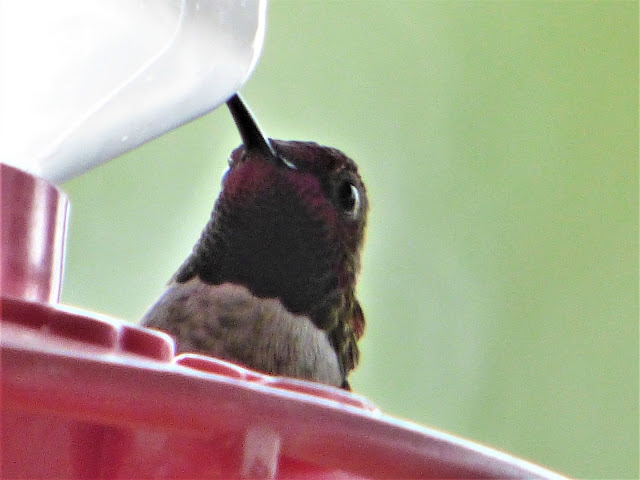 One kind of bird has been a constant visitor in our yard all winter: the White-crowned Sparrow. Most of them will leave the region in a few weeks on their way to breeding grounds as far north as the Arctic Circle. They do a great job of picking up the sunflower seeds that get scattered on the ground by the other birds. 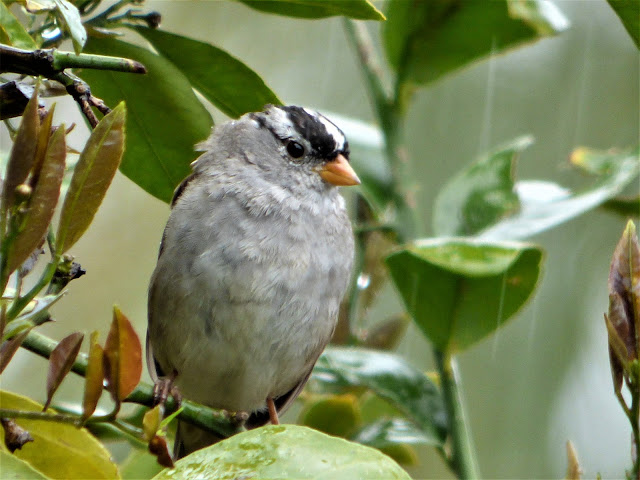 The House Sparrow is a Eurasian native that was introduced to North America in the 1850s, and they quickly spread across the continent and are among the most common birds around. We see them so often that we become inured to their presence. I suppose we should admire species so adaptable as to be able to live successfully wherever humans do. 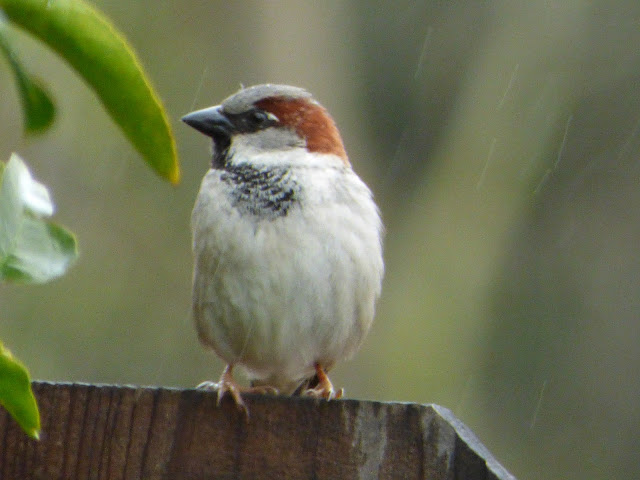 We have House Finches and Purple Finches that spend time at our feeders, but I was not successful at getting decent pictures today. Later on we had one more visitor, another bird seen so often in our region that one can sometimes take it for granted. But familiarity can't take away the stunning beauty of the California Scrub Jay (until somewhat recently called the Western Scrub Jay). They are found along the Coast Ranges from the Puget Sound to the southern tip of Baja California. There are dozens of them along the Tuolumne River this year, perhaps because of a huge acorn crop this year. But they also like the seeds available in my yard. 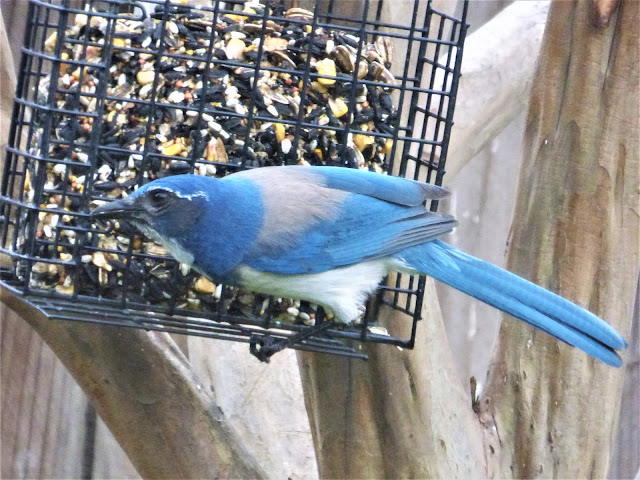 And that was the nature I experienced today through a narrow sliver of the landscape visible while looking out my back door.

Love the scrub jays! They used to be quite common here in Santee, east of San Diego, but apparently were practically wiped out by the West Nile virus. I've seen/heard a couple here in the past year, so they are probably slowly coming back.

Thank you for sharing these lovely images. I often see these birds but have no knowledge of what they're called.