Darlingtonia: A Horror Story in Sand and Serpentine: Part 2, the Sequel


In horror movies, we all know the monster/murderer is never dead, and that there is always a sequel. In that spirit, I am revisiting a blog from 2013 about Darlingtonia californicus, the carnivorous plant that lives in acidic or serpentine-based soils in northern California and Oregon. My last visit was during a November, so I missed any blooming flowers from the plants. This time, it was spring and I got pictures of the unique flowers of the Pitcher Planet (or Cobra Lily). They're towards the end of this post. Let's get to the story... 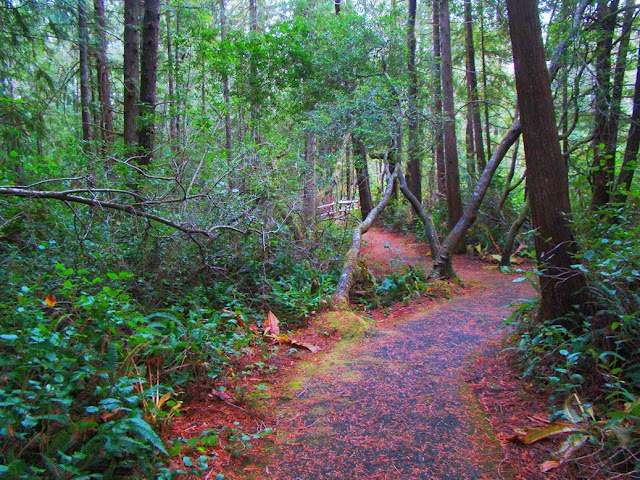 The trail through the forest began innocently enough. Greenery was everywhere. The travelers were hungry, driven by a need for food, a need so bad they could smell it. They drove deeper into the dark shadows. They began to be aware of a pervasive odor, an odor that awakened memories of delicious feasts from the past. Something was out there in the dark shadows.

There was an opening. The splendid odor of food wafted from inside. They were so hungry, they were driven to see what was in the opening. There were some strange fibers about their feet, but the smell of food was overpowering their sense of caution. They crept further inside, becoming vaguely aware that the floor beneath their feet was becoming slippery. The entrance was now out of sight, but they didn't worry, they could see openings that would allow them to escape if necessary. They started sliding deeper into the cave, and they became alarmed. They decided they were in danger, and climbed towards the openings only finding to their increasing panic that they were transparent windows, not exits. They could not escape! Where was the opening? It was gone.

A pool appeared below. A pool filled with the digested remains of previous travelers. The travelers realized their peril and tried to climb back up but downward pointed spikes prevented them from doing so. They struggled, exhausting themselves as they fell deeper into the abyss... 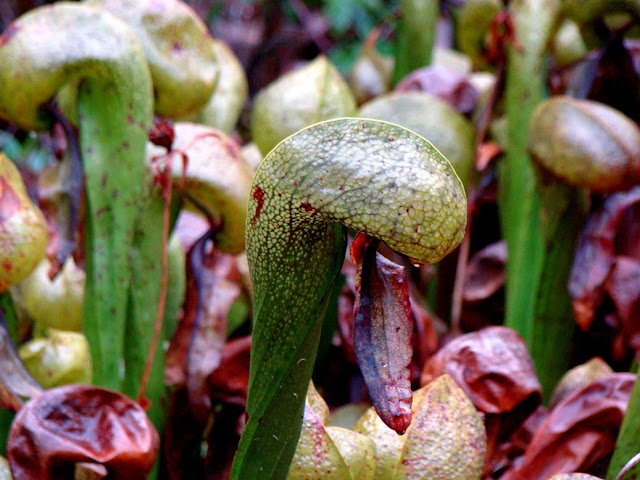 And such is the terrifying drama that was recommended to me by Lockwood when he found I was headed to Florence, Oregon for Thanksgiving back in 2013. Of course the travelers were insects, not humans, and their terrifying trap was a Darlingtonia californica, also known as the Pitcher Plant or the Cobra Lily. The plant grows in northern California or southern Oregon, in two completely different environments: sandy coastal bogs and serpentine soils. In both environments nitrogen is limited and the plants get it by capturing and digesting insects.
The Darlingtonia Botanical Wayside is a small parkland of 18 acres about five miles north of Florence, Oregon in a bog formed in the hollows of coastal sand dunes that have been stabilized by the growth of a thick forest. It's a pleasant little stop, and given the nature of the plants in the bog, maybe free of mosquitoes? Maybe not at other times of the year...it was pretty cold the first time we were there. Yesterday it was windy.
It was November when I visited the first time. We were there on the last day of May this year, and the flowers of the Pitcher Plants were blooming. 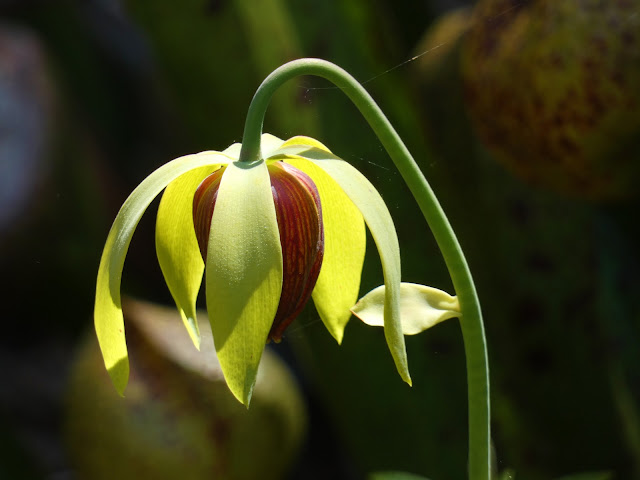 The plant is a real conundrum. On the one hand it attracts bugs in order to pollinate the plant, but on the other it tries to consume them! 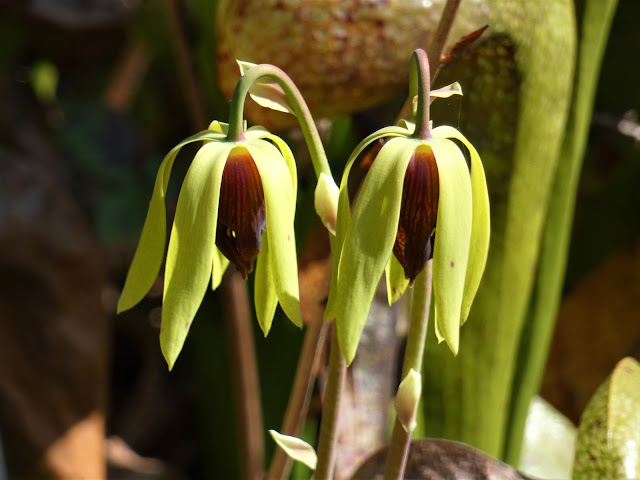 The trail is short and handicapped accessible, and there are several interpretive signs.
The small section of forest in the park was also beautiful. I haven't been in the area enough to start recognizing the species just yet. Cedar or spruce?