I usually don't need an inspiration to write about Mt. Shasta, but I realized (two days in) that October 14-20 is national Earth Science week, and the theme of the celebration this year is "Earth as Inspiration". In case you have not yet realized this yet, but I am in fact inspired by the Earth. It started early on in my life with family vacations to some stunning places in California and the American Southwest, continued with scouting experiences nearly every weekend in my teens that included extensive work with topographic maps, and right into my college major and subsequent career as a geology professor. And then I found the form of story-telling called blogging in 2008.

Mt. Shasta is an earthly inspiration. We visited two weeks ago as part of our field course on California's volcanoes. The stops included a drive to the end of the highway at Panther Meadows at 8,000 feet on the side of the 14,179 foot high volcano, and another stop on the north flank where we could see the glaciers and one other astounding feature of the volcano (mentioned below). Shasta is the second tallest volcano (behind Mt. Rainier) but is the most voluminous composite cone (stratovolcano) in the range (I'm parsing words here; there is a larger volcano, but it is of a different kind and will be discussed in a future blog). As a classic composite cone, it is composed of the remains of at least four previous incarnations, capped by the current active vent, Hotlum Cone. The oldest lava and ash dates back to around 600,000 years ago, but the youngest is a mere couple of hundred years. It likely erupted in 1786.

As the highest mountain in Northern California, it supports seven glaciers. Whitney Glacier, with a length of two miles, is the longest in the state (below). The glaciers are responsible for one of Shasta's unique hazards: jokulhlaups! These are floods caused when meltwater is sealed underneath the glacial ice which then breaks out in a catastrophic manner. Although caused by eruptions under the glacial ice in places like Iceland, those that occur on Shasta can happen almost any time. They are generally more of a nuisance, messing up roads and bridges, rather than a killer.

The biggest dangers of a volcano like Shasta are volcanic mudflows (lahars), and hot ash flow eruptions. Lava flows, unless they interact with the ice, are of a lesser concern. Andesite lava has a pasty consistency and is not likely to flow overly far from vents on the mountain. Lahars are of the greater concern, as they are capable of producing massive casualties and structural damage. The towns of Mt. Shasta, Weed, and McCloud are constructed on old lahar deposits. Major events could cause the closure of Interstate 5. Hot Pompeii-style ash eruptions are somewhat less likely, based on the previous history of the volcano.
One of the most outrageous landscapes to be found anywhere on the planet lies to the north of Mt. Shasta. When compiling geologic maps of the region in the 1970s, geologists weren't sure how to interpret the vast region extending north from the mountain reaching 28 miles to the edge of the village of Yreka. It was a hummocky landscape, made of hundreds of small hills and cones of lava fragments with intervening hollows, some containing lakes and ponds. Was it some kind of odd field of cinder cones? It didn't make a lot of sense until the eruption of Mt. St. Helens in 1980. 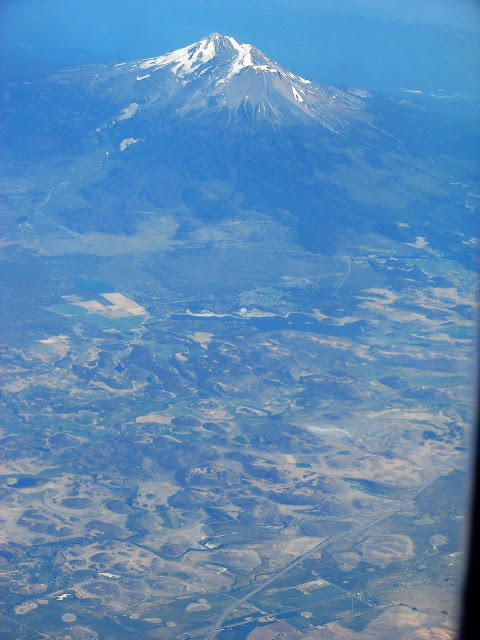 The St. Helens eruption was initiated when an earthquake caused the entire north flank of the volcano to collapse in a gigantic debris avalanche that traveled for twelve miles down the Toutle River valley. Humans had never witnessed a landslide so large. It uncapped the volcano, leading to the very explosive ash eruption that followed.

To the geologists studying the region around Shasta, it was a revelation. The avalanche at St. Helens formed hundreds of hummocks similar to those found at Shasta. It quickly became clear that the deposit on the north flank of Shasta was the remains of a gigantic debris avalanche. The St. Helens avalanche involved less than a cubic mile of material (0.67 cubic miles), but the now-apparent debris avalanche at Shasta was ten times larger (about 6.5 cubic miles), and it traveled twice as far. It seems to have happened between 360,000 and 300,000 years ago. It's stunning just to image seeing something like this happen. 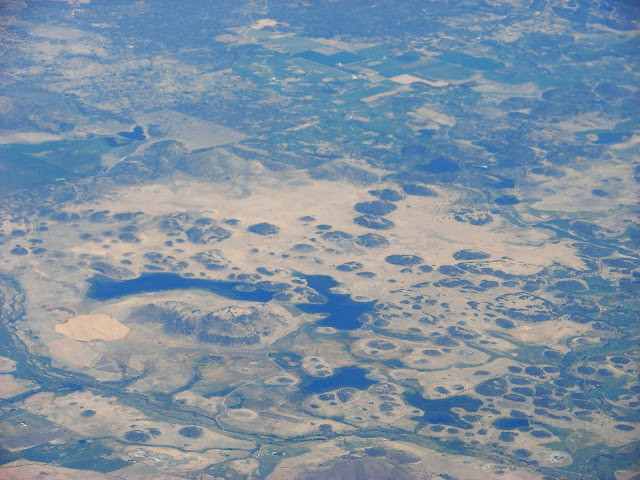 What aspects of the Earth do you find inspiring?
Posted by Garry Hayes at 12:18 PM