River Otter on the Tuolumne


I am quite lucky to have the Tuolumne River in my backyard. The river rises in the highest regions of Yosemite National Park, flows through incredible and largely unknown gorges that rival the Grand Canyon in depth. Water is trapped in a series of reservoirs including Hetch Hetchy and Don Pedro, and at that point the river could have been cut off the way the San Joaquin River was destroyed. But water agreements have kept a minimum flow, so the river flows onto the floor of the Great Valley and maintains a continuous riparian habitat all the way to the Sacramento Delta. The river bed has been severely altered, first by the gold miners, and later by quarry operators and farmers. But portions are in the process of healing, and in places the stream is starting to resemble its earlier incarnation as a wild river.

I saw River Otters (Lontra canadensis) for the first time just two or three years ago, and I'll see them two or three times a year when I stroll along the river trail. This morning the water level was low and river transparent, so I saw what I thought was an immense fish maybe three feet long deep in the water. I turned on the camera to get video and hit the wrong button, but then the "fish" surfaced and I realized I was watching an Otter. I got the video going correctly and got some of the best "footage" so far. 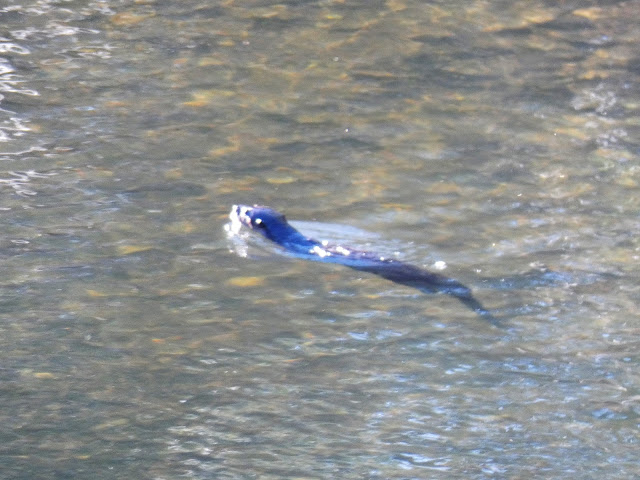 River Otters are making a comeback in the rivers and streams of the San Joaquin and Sacramento Rivers and across the Bay Area. I'm so glad some of them have made it here to my little corner of the river! For more information on otter sightings and ecology, check out the River Otter Ecology Project.
Posted by Garry Hayes at 9:33 AM

On sun the 12th I saw 5-8 river otters playing, swimming and walking on land upstream of Henderson park on the Merced river east of Snelling, Ca. Supercool. In thirty yrs I've never seen one