A Dam Big Shame, and Things Lost and Gamed... 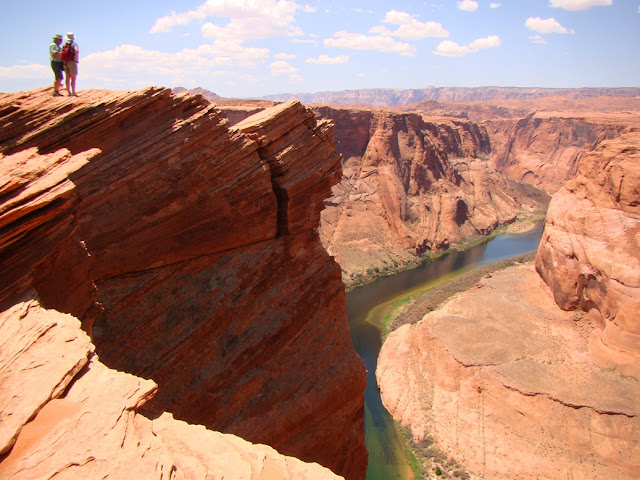 It just doesn't get much better than this, to stand on the brink of a high cliff in the barren desert, and to see a stream of life-giving water in the depths below. Of course, if you are in trouble and dying of thirst, you are pretty well screwed, since the cliffs are pretty much unclimbable! There is a story behind the dramatic appearance of the river in the photo. It not a genuine river anymore, not exactly. It is a blunt instrument, wielded badly. 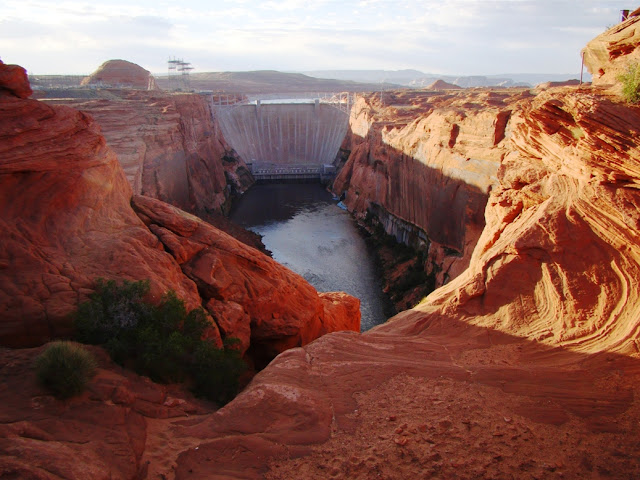 Glen Canyon Dam was built between 1957-1964 after a contentious environmental battle over whether national parks (Grand Canyon – Bridge Canyon dam) or National Monuments (Echo Park dam-Dinosaur National Monument) should have reservoirs extending into their boundaries. Glen Canyon was at the time protected by neither designation. The dam is 710 feet high (216 m) and 1,560 feet (475 m) wide, with a volume of 5,370,000 cubic yards (4,110,000 cubic meters) of concrete. It is anchored in Navajo Sandstone. When full the lake is 186 miles (299 km) long, with 1,960 miles (3,150 km) of shoreline, and a total capacity of 26.2 million acre feet (equivalent of two years of the average flow of the Colorado River). The lake is a popular national recreational site today, but Glen Canyon was once one of the most beautiful valleys along the Colorado River. Unfortunately, when the dam was completed, only a few hundred people had floated down the river to see the stunning canyon (and therefore explaining my title of things "lost and gamed"; the dam was built here by threatening to put dams elsewhere).

After construction was completed in 1964, the lake slowly filled (since water use downstream did not cease, only surplus water was used to fill the lake) and did not reach capacity until 1980. In 1983, the dam came perilously close to failing due to a major flood and design errors. Instead of using floodgates and spillways at the top of the dam for emergency drainage, designers utilized the diversion tunnels used to channel the Colorado River around the dam site during construction. They proved woefully inadequate to the task in 1983 as cavitation caused the walls of the diversion tunnels to rip out. In places the powerful flow of water cut 32 feet (10 meters) into the soft Navajo Sandstone and threatened the structural integrity of the dam itself. The diversion tunnels had to be shut down, and the lake threatened to flow over the crest of the dam in an uncontrolled fashion. This could have led to catastrophe, as such uncontrolled flow could have eroded and weakened the sandstone abutments of the dam. Failure of Glen Canyon dam would have led to the domino-like destruction of other large dams downstream, and the decimation of the water-supply infrastructure of some thirty million people. The disaster was averted by the construction of an 8 foot high dam of wood flashboards that held back the water long enough for the flood to subside. The structural integrity and survival of the dam came down to about one inch...the distance between the water level and the top of the flashboard dam in 1983.

Dam engineers are confident that modifications to the spillway tunnels will allow the dam to withstand future flooding events, but other concerns have become prominent. The southwest has been suffering an extended drought, and lake levels in recent years have become perilously low, threatening to turn Lake Powell into a “dead pool” incapable of producing electrical energy. In 2013 the lake was filled to less than 50% of capacity. Some water experts suggest that the lake may never be able to fill to capacity again, in part from drought, climate change, and upstream diversions of water.

Back to that photo at the top of the page...it isn't the whole story. The spot is called Horseshoe Bend, and it lies just a couple of miles downstream of Glen Canyon Dam. It is an entrenched meander, which developed when the land was uplifted, while the originally sluggish winding river started cutting downward instead of laterally. The rainbow-like pattern of red rock and green-blue water is an artifice of the reservoir. Unlike the olden days when copious amounts of silt caused the river to flow red, the water draining from the lake today is transparent and cold, in the 40-50 degree range. For a river in a hot desert, this is extraordinary. The ecosystem of the river evolved in different conditions than this, and species are sensitive to the new regime. Natural species of fish, amphibians and insects are in a difficult situation. For we humans it is ironic that river rafters have look out for hypothermia in their crews if people get dumped in the river on a day when the temperature is over 110 degrees. 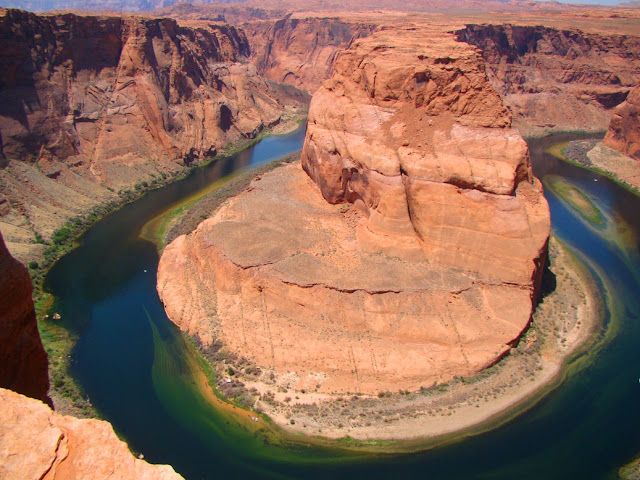 So the view is just stupendous, but sobering at the same time. It can be reached by a short 3/4 mile long sandy trail from a parking lot on Highway 89 just 4-5 miles south of Page, Arizona. The highway is closed because of a serious landslide farther south but is open to the parking lot. It is well worth your time if you are ever in the region.
Posted by Garry Hayes at 11:10 PM

This was so interesting, Garry. It was a horrible loss (as was the drowning of Hetch Hetchy valley in Yosemite)to have flooded Glen Canyon. It was just tragic. I have Eliot Porter's book, "A Place No One Knew" and he explains the tragic loss of this canyon and said he felt "partially responsible for it's death". He photographed the beauty of the canyon and river before it was lost forever. David Bower always said, too, that that was one of his biggest mistakes, that he compromised "on the construction" of the Glen Canyon dam.

That should have read David Brower

Why is the water so cold?

The winters in this part of the southwest can be very cold, and the water becomes cold and denser, so it sinks hundreds of feet to the bottom of the lake. In the summer, only the surface of the lake warms and there is no mixing. When they generate electricity, they draw the water from the lower parts of the reservoir to get the highest pressure. So it is very cold water that moves downstream.