There IS Hope for Science Education in the Central Valley 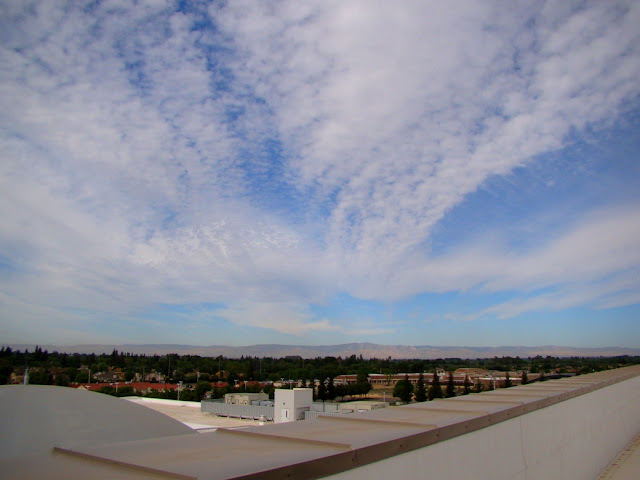 It was quiet this morning in the Science Community Center at Modesto Junior College. I walked up to the roof to have a look around and there was a beautiful cloud pattern and the Diablo Range rose in the distance. It was a peaceful start to the day. But what a day it was!

It was the Ribbon Cutting event for the Science Community Center. It was a decade-long-plus journey for the science faculty at MJC who were tasked with envisioning and designing a facility for teaching science that could carry our campus through the next century. How in the world can you plan for a century? We can't possibly know the kinds of changes that face our community and society over the next century, but we can do our best to prepare our children for the incredible journey. We came together and produced a vision: a teaching facility that could house the biology, chemistry, physics and earth science programs, but which would also house our community outreach in the form of the Great Valley Museum, a fully functional observatory, and a state-of-the-art planetarium. And an outdoor nature laboratory. We saw a place that would give the best possible educational opportunity to our students, and inspiration to generations of children who might not otherwise ever be exposed to science.

As I've noted before, the vision was challenged. It was too expensive. It was so grandiose. It was too ambitious for a community that has consistently high unemployment, and too many low-paying jobs. Attempts were made to cut back the project, but the faculty and staff persisted, and aided by a very unfortunate Great Recession that drastically cut construction costs, the Science Community Center has become a reality with the vision largely intact. And millions of dollars under budget.

Unlike many projects at public educational institutions, this project (and dozens of others across our campus) was funded by the local community, not the state. It was the fruit of Measure E, a bond issue in our district and county. The community supported the concept of giving our students and our children the best possible education as the best way of out of our economic malaise. They gave us the mandate, and I think we achieved the aims. The only piece now missing is the Outdoor Nature Laboratory, and it may be just a year away from construction.

But we still wondered. Would the public show up for a ribbon-cutting ceremony? Was the community still behind us? I felt they would be there, but I'm not sure what the organizers of the event were expecting. They only put out 70 chairs (but they did provide a live musical act and food). Twenty minutes before the event, the chairs were mostly filled... 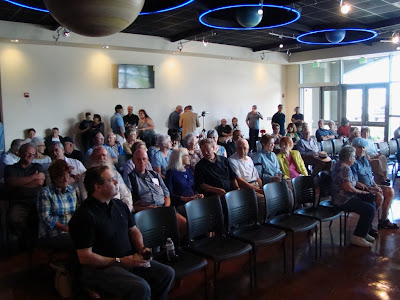 And then more than filled. Dozens of people were standing behind the chairs. And more were arriving by the minute... 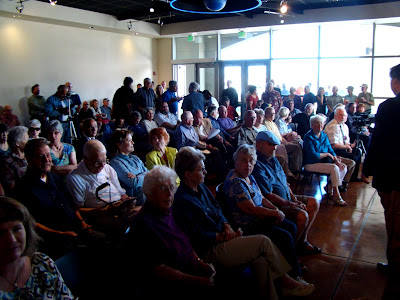 There were at least 150 gathered around the seating area by the time the dignitaries started their speeches. And still more people were arriving. 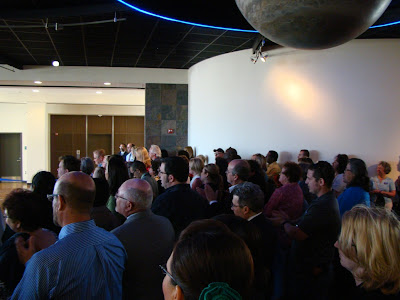 And then I looked behind me, and realized the entire foyer was filled with hundreds more people. They couldn't even see the speakers or the ribbon, but they pressed in. It was a wonderful affirmation of years of hard work on the part of our faculty and staff people.

We spent the next few hours leading tours through the facility. It was delightful to experience the enthusiasm our community members had for the center. There were seniors who had served on this site during World War II when this property was a military barracks, or a few years later when it was a mental health facility (I'm inclined to still think of this place as an asylum). Some of my first students from the early 1990s were there. Some of my current students were there. And there were kids. Kids enthralled at the opportunity to touch a genuine dinosaur bone, and excited to realize that our region was the first place in California where a dinosaur was discovered. And that even more exciting creatures once dwelt here, including sabertooth cats and wooly mammoths. And menacing 30 foot long mosasaurs! 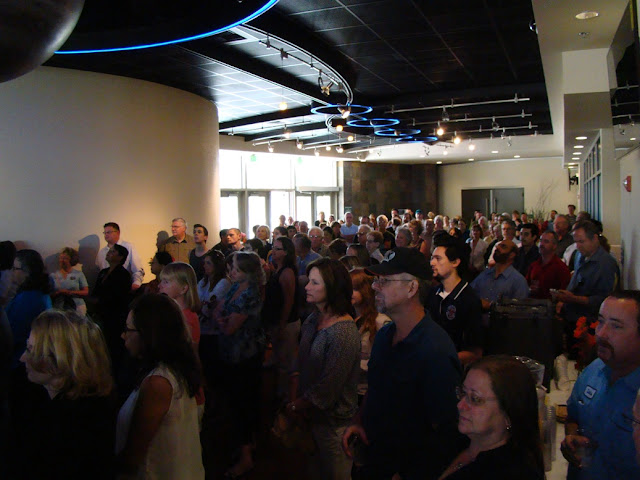 There is hope when a community can come together and support a project as ambitious as the Science Community Center. I have come to truly feel that the people of our region have collectively decided that education is a valuable tool in the effort to produce a better economy and society.

My day ended more quietly with what to me was an equally exciting event: I conducted the first ever class in the new Geology Laboratory in the Science Community Center. It was the first class meeting for our summer field studies class. As you can tell, I was happy to be there. 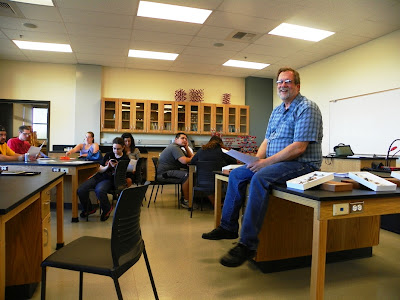 Great story, Garry! The facility looks amazing, and I certainly hope the students appreciate all the work the faculty and community put in to making this a reality. Hope to pay a visit someday (perhaps on a sampling trip to the Coast Range).

Wow! Touches the heart to hear such wonderful news about this Science center. I hope you continue to have wonderful teaching opportunities for those lucky kids!! Cheers.

The Aussie and the Owl said...

It is an amazing building Garry! I was very excited to tour it all, especially the new planetarium and telescope. I came to the telescope just in time to see Michael giving a tour. I was in awe.