The Other California: Springtime along the Great Western Divide

The Great Western Divide? Where's that?

My off and on blog series on the Other California is an exploration of the little-known places in my fair state with interesting, even fascinating geological features. Sequoia National Park might seem too familiar a place to be included as part of the "Other California", given that my own definition of the series is that it should include those places that don't normally show up on postcards, and Sequoia National Park certainly does.

So why include Sequoia? The primary reason is that it actually is less known than other parts of the Sierra Nevada. Ask folks where they go in the Sierra, and Yosemite Valley or Lake Tahoe are often the first places mentioned. And people often come to the park not so much for the geology, but for the biology, mainly to see the trees after which the park is named. But the park has a rich geological heritage as well.
The shape of the Sierra Nevada is often described as a tilted block of granitic rock and metamorphic rocks. That's true in the Sierra Nevada north of Sequoia. Driving to Yosemite National Park from the west involves a gradual climb up the western slope that continues to the Sierra Crest before dropping precipitously into the Owens Valley or Mono Lake on the east. Sequoia and the Southern Sierra Nevada is quite different. When one arrives from the west (which actually is the only way in which the park can be approached by roads), the road climbs steeply to a plateau, and the slope continues to a high crest. But not of the Sierra Nevada. It's an entirely separate mountain ridge called the Great Western Divide. The actual crest of the Sierra Nevada lies farther east, across the deep gorge of the Big Arroyo and the Kern River.

The Great Western Divide is a spectacular mountain range. It rises nearly to the height of the actual Sierra Crest, with several peaks exceeding 12,000 feet in elevation (A dozen or so peaks on the Sierra Crest reach 14,000 feet). Despite being far to the south, the peaks were high enough to be scoured by the glaciers of the Pleistocene Ice Ages.

A few weeks back we had the chance to pay an early springtime visit to Sequoia National Park. We came in from the west, up Highway 198 along the Kaweah River through the town of Three Rivers, and then up the Generals Highway to the Sequoia groves for which the park is justly famous. The road is notably curvy, and climbs through a rugged canyon choked with giant boulders that have tumbled from the cliffs above.

We soon passed one of those kitschy things that Civilian Conservation Corps workers in the 1930s seemed especially fond of constructing: a drive-through rock (to go along with "drive-through" trees). They enlarged the opening under the immense boulder, and put the road through it. 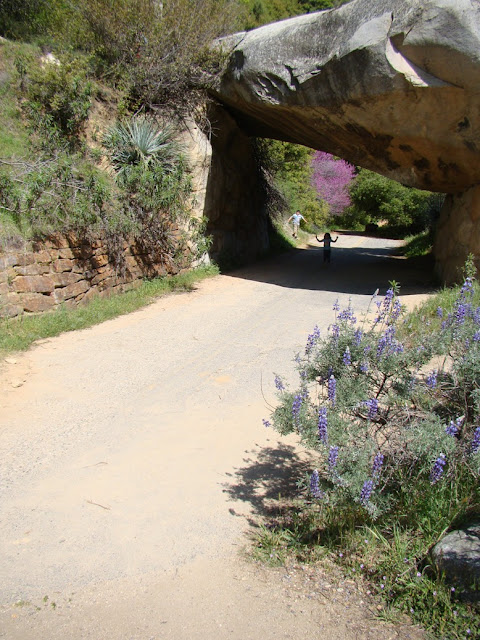 If one wonders why the road today circumvents the rock tunnel, one need only look at the underside of the boulder. People driving in scenic national parks are not known for paying close attention to their driving, and in a time of massive recreational vehicles, this kind of thing just doesn't cut it anymore. 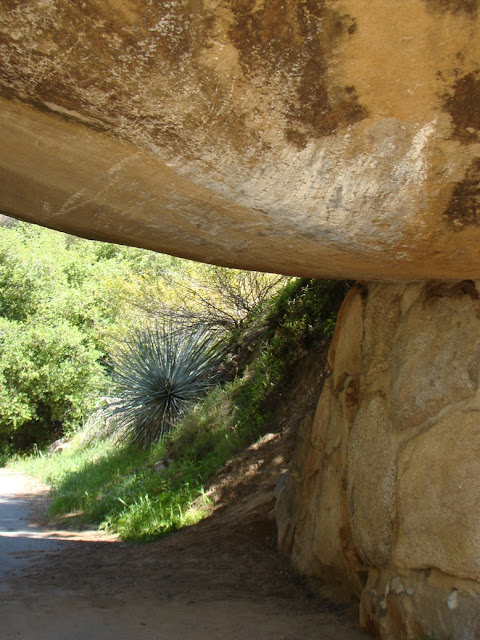 A hat tip to the arrival of spring in the Sierra Nevada...the redbuds were in full bloom up the canyon, providing a splash of vivid color on the dark green slopes. 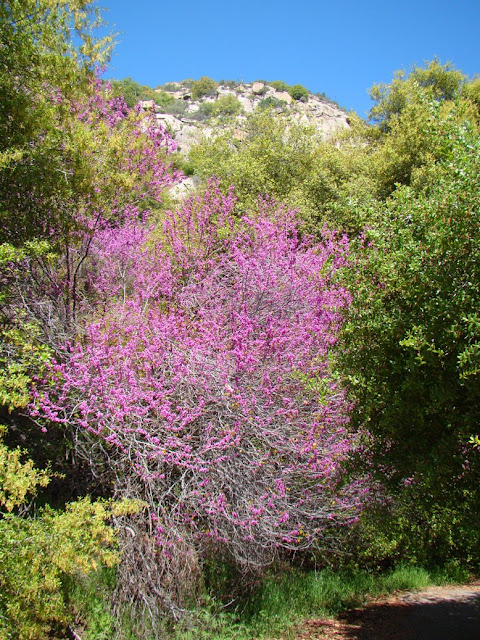 Although not as colorful as redbud, the ceanothus shrubs added a wonderful fragrance to the air. The bees and other pollinating insects were in heaven. 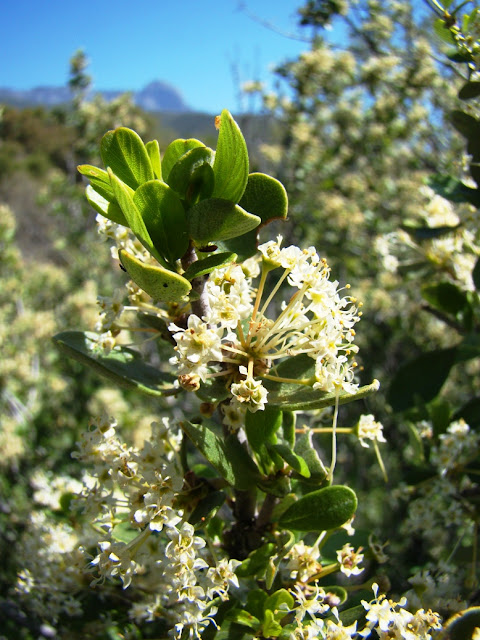 As we went further up the canyon, Moro Rock loomed ever higher above us. The granite rock of the dome expanded as the rock was exposed at the surface. The plutonic rock tended to fracture parallel to the surface, which had the effect of removing corners and edges from the rock outcrop, eventually leading to the formation of the dramatic dome. The process is called exfoliation. It would be so cool to climb the dome, but we knew that most of the park access roads would be closed because of the winter snowpack. 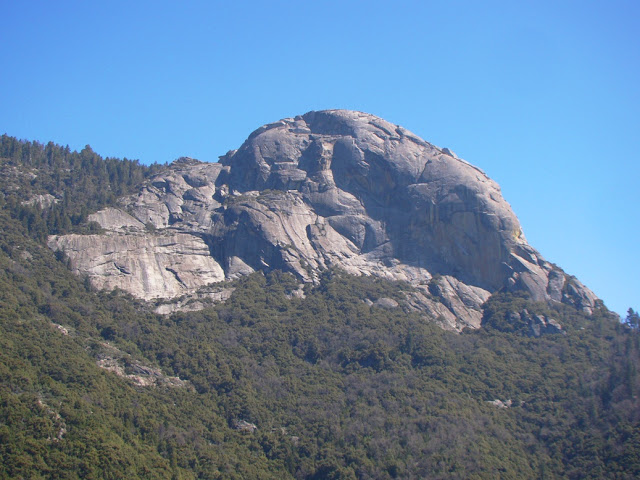 Except that they weren't. When we reached Giant Forest, there were a few snow patches here and there, but the snowpack is currently at half the normal level. All the roads were open, so we headed over to the Moro Rock trailhead. As dramatic as the dome is, trail access is easy because the CCC put in a stairwell to the summit. Easy that is, if you don't have problems climbing 300-400 steps. The views in the clear spring air were stunning.

Immediately across the Kaweah Gorge were the Castle Rocks (9,000+). The spires and towers of granitic rock exhibit the other result of rock expansion: jointing. When the fractures that result from pressure release are vertical, they allow water to get into the narrow spaces. If the water freezes it expands, wedging the rock apart. The water also aids in the chemical weathering of the rock, so as time goes on the cracks widen, forming the prominent spires. 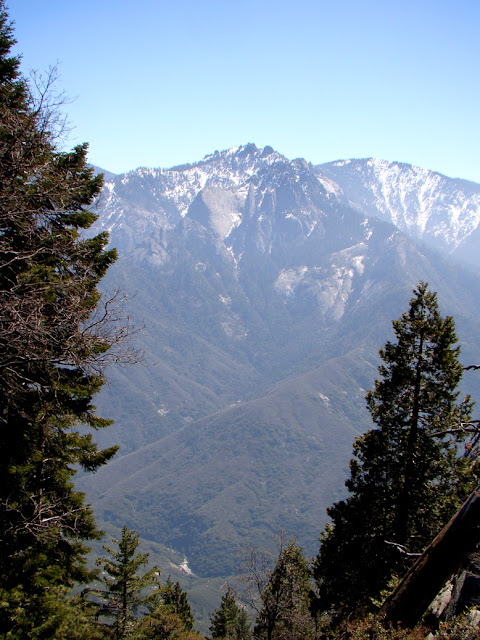 Moro Rock is best known for the wonderful perspective it provides on the Great Western Divide. The mountains are often hidden from view by other high ridges or thick forest, but Moro Rock stands out from the mountainside, and the view is tremendous.

With the covering of winter snow, one can imagine the glaciers that carved the horns, aretes, and cirques that are so well exposed here. Cirques are the bowl shaped basins on upper ridges where the glaciers accumulated. Aretes are the knife-edged ridges that divide glacially carved valley, and horns are the sharp pointed peaks that result when glaciers pluck rocks from the base of the cliffs in the cirques and aretes. The Matterhorn in the Alps is a familiar example, but there are many horns to choose from on the Great Western Divide. 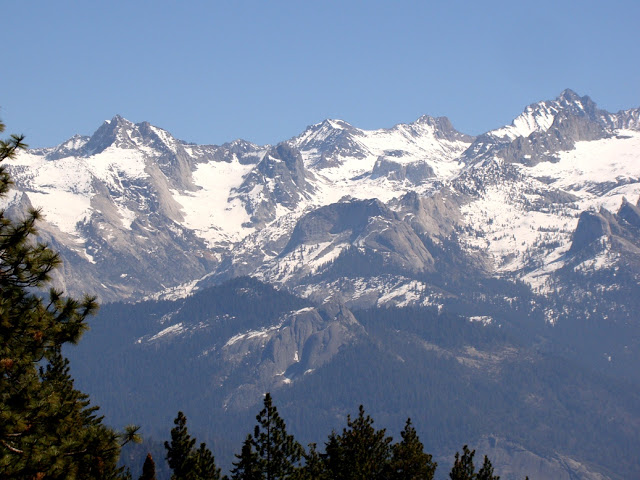 I have not yet had the privilege, but the High Sierra Trail winds its way from Crescent Meadow in Sequoia to the summit of Mt. Whitney and the Whitney Portal trailhead. It is 60+ miles long, and crosses two major passes, and it must be a marvelous adventure. It is second only to the John Muir/Pacific Crest Trail in popularity.

The picture below illustrates the difference between glacial erosion (the cirques and horns in the upper part of the photo), and the weathering and exfoliation that happens at the lower elevations (the domes both right and left of center). 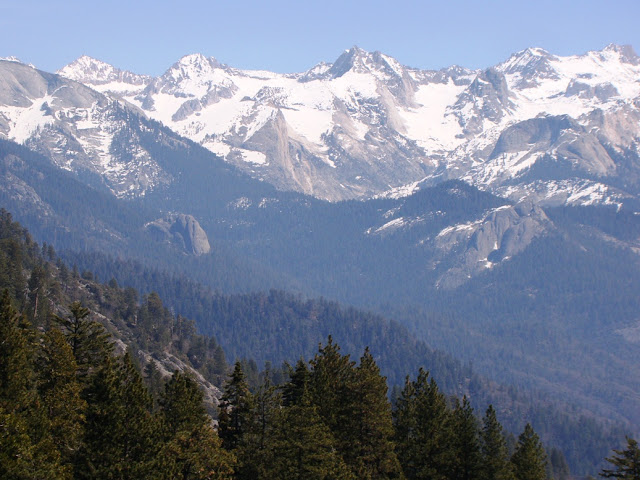 Moro Rock also provides a wonderful view west towards the Sierra Nevada foothills and the usually invisible Central Valley. You are looking at the most polluted air in the United States: Bakersfield and Fresno. It's not entirely their fault, as they don't necessarily produce more pollution per capita, but the towns are surrounded by high mountains, so they can't blow their pollution into someone else's area the way other municipalities are able to. The photo below is as clear as I've ever seen it from Moro Rock. 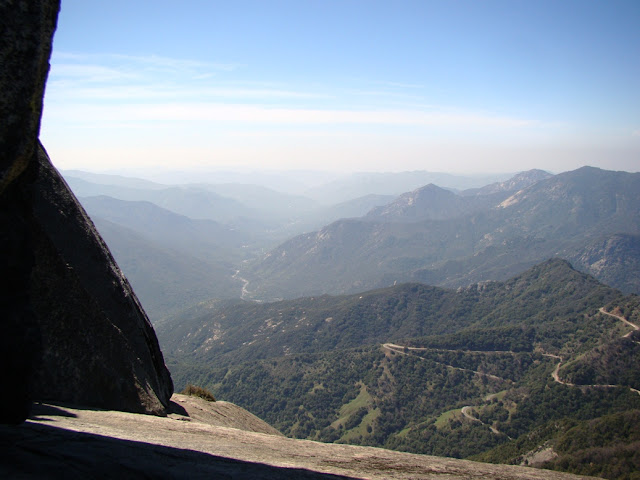 Next, we took a look at some trees with a unique geologic history...
Posted by Garry Hayes at 12:03 PM

I love reading your blog, but you really have to do something about those imperial units. Please, use values also in meters!