The Other California: The Biggest Living Things and the Deepest Canyon in the U.S. (maybe, almost, perhaps) 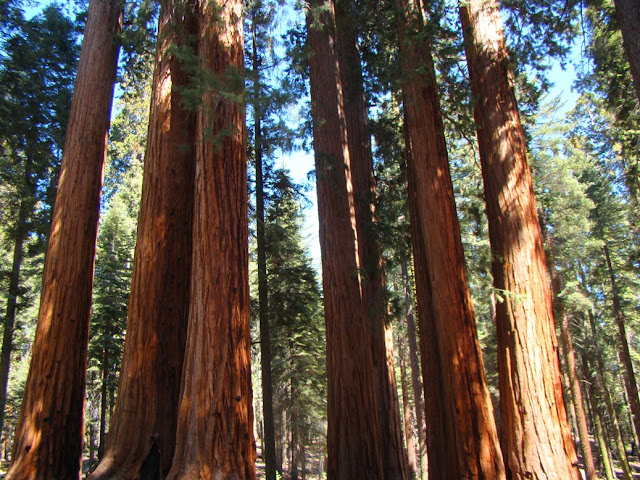 Sequoia and Kings Canyon National Parks were established 50 years apart (1890 and 1940), and they preserve different aspects of the Sierra Nevada, but they are adjacent and as such are jointly administered by the Park Service. My Other California blog series is an attempt to spotlight the lesser known parts of our state that don't always show up on the postcards that tourists buy, but which have incredible geological features. As a pair of national parks, Sequoia and Kings Canyon don't seem to fit the bill, but I include them because the two parks are less visited, and yet have some of the most spectacular geological scenery to be seen anywhere. How many places can boast the highest peaks, the deepest canyons and the biggest living things in the world?

A bit of perspective on my claims, though. Sequoia National Park includes the highest peak in the lower 48 states, with Mt. Whitney (14,505 feet; 4,421 meters). Denali in Alaska is much higher, and Mauna Kea and Mauna Loa on the Big Island of Hawaii are the tallest mountains in the world (if you measure from the seafloor). Kings Canyon has a reasonably valid claim to being the deepest canyon in North America, but the deepest part of the canyon lies a few miles downstream of the park boundary (though it is partly protected as Giant Sequoia National Monument). But the biggest living things? Absolutely. 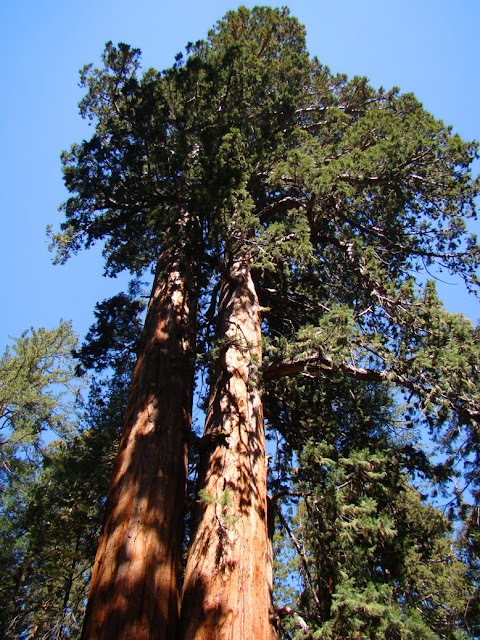 There has always been a bit of confusion about the Giant Sequoias (Sequoiadendron gigantea), because California has two gigantic tree species. The other is the Coast Redwood (Sequoia sempervirens), which grows in a narrow coastal corridor between Big Sur and the Oregon state line. The Coast Redwood grows to immense heights (nearly 400 feet), but is usually slimmer. The tallest Sequoia trees usually don't exceed 300 feet (the tallest is 311 feet), but the trunk is more robust to a high level, so the shorter trees have the greater bulk, making them the largest living thing on the planet. The state legislature was confused certainly, as they made the "native redwood" into the state tree without realizing the two trees were distinct. The attorney general of the state eventually got involved, making a final ruling declaring both species to be the state tree. Both tree species live for thousands of years, but neither is the oldest living thing in existence. That honor goes to the 5,000 year old Bristlecone Pine, also a California resident species. 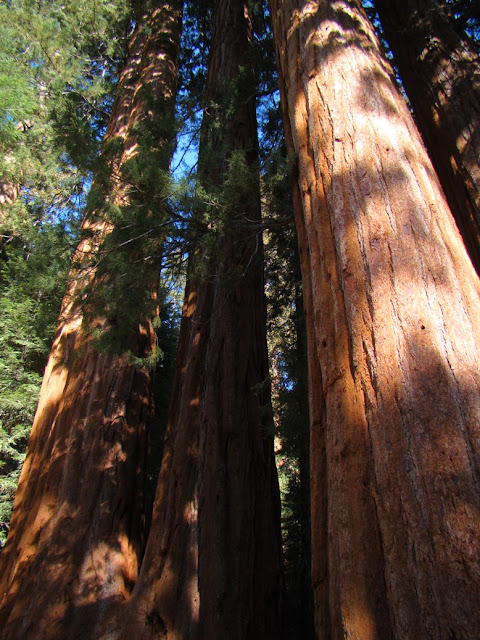 The trees are tremendous. They occur in about 60 groves between about 4,600 and 7,000 feet along the western slope of the Sierra Nevada. Such giant trees would seem irresistible to loggers, and many were cut, but the wood was actually of low quality for most purposes and was usually made into pencils, shingles or grapevine stakes. Today nearly all the groves are protected in the national parks (Yosemite, Sequoia, and Kings Canyon), a national monument (Giant Sequoia), and a state park (Calaveras Big Trees).

The trees have a geological story. They once thrived across the northern hemisphere, and in North America fossils of the trees are preserved in Yellowstone and Petrified Forest National Parks (the direct ancestors are preserved in Nevada). The petrified trees in Yellowstone are several tens of millions of years old, but the trees in Petrified Forest are several hundred million years old! Ancestors to the Sequoia date at least to the Jurassic Period, so the trees were witness to the evolution of the dinosaurs and their extinction. Climate change seems to have been the tree's nemesis, and the Pleistocene ice ages probably eliminated them from most of their former range. The trees were able to survive in the Sierra Nevada in part because they could propagate downslope and upslope in response to the advancing and receding glaciers (see this National Park Service article for the details on the origin and distribution of the Sequoia trees). 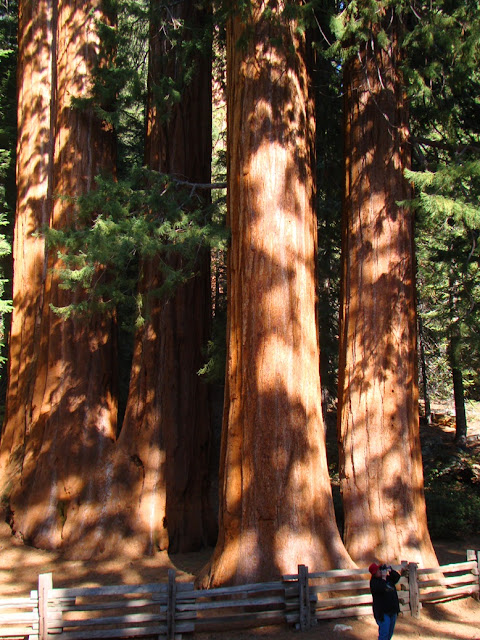 I'm opening a can of worms by discussing the deepest canyon in North America. Hells Canyon on the Snake River along the Idaho-Oregon border is usually described as the deepest, but measurements vary, as well as the precise definition of canyon. I won't make a judgement other than to say that the two canyons are very close to being the deepest, only a few tens of feet apart, and that both of them are 2,000-3,000 feet deeper than the Grand Canyon (The Grand really is grand, though. According to the park service, with a volume of 4.17 trillion cubic meters, it is the largest canyon in the world). Spanish Peak, at just over 10,000 feet (in the photo below), looms 8,000 feet over the canyon bottom at Rough Creek.

How can this canyon be so deep? If you saw my last post, you would recall that the southern Sierra Nevada is topographically different than the northern Sierra. It is more a high plateau than a westward tilting block. The adjacent Central Valley is different as well. It's been sinking, so much so that some of the sedimentary fill has buried portions of the Sierra foothills. Strange things are happening in the southern Sierra, and it may be related to a process called delamination. The Sierra may have had a dense root of mantle material that was out of equilibrium with the surrounding hotter and slightly fluid mantle. The large mass broke away and sank deeper into the mantle. The overlying crustal rock, the Sierra, popped upwards like a ship losing an anchor. The Kings River, with an increased gradient, started cutting rapidly downwards within the last few million years. Spanish Mountain can be thought of a high secondary ridge like the Great Western Divide, but it was breached by the erosion of the Kings River.

What's ironic? The river that carved the deepest (or second deepest) canyon in North America doesn't flow into the sea. The Kings River historically flowed mostly into a large lake in the southern Central Valley (Tulare Lake) and evaporated away. Some distributary channels delivered water to the San Joaquin River (and then onto the Pacific Ocean), but today the river is fully utilized for irrigation, and even the lake is gone, replaced by agricultural fields. 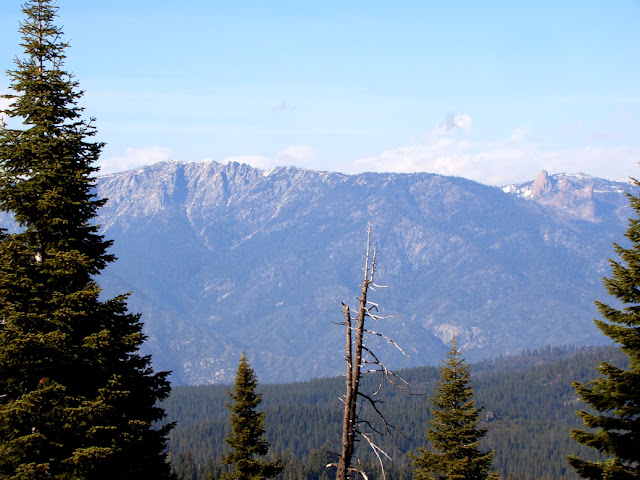 When we visited a few weeks ago, the road into Kings Canyon was still closed. The problem isn't snow (there wasn't any to speak of). The canyon slopes are so steep and rocky that rockfalls are a continuing hazard when the ground is still saturated and subject to freezing conditions. We had to take a pass this time around, but we'll be back in the fall for a field studies class. Look for pictures around early October!

Oh, and there were some cute dogs hanging out at Grant Grove.... 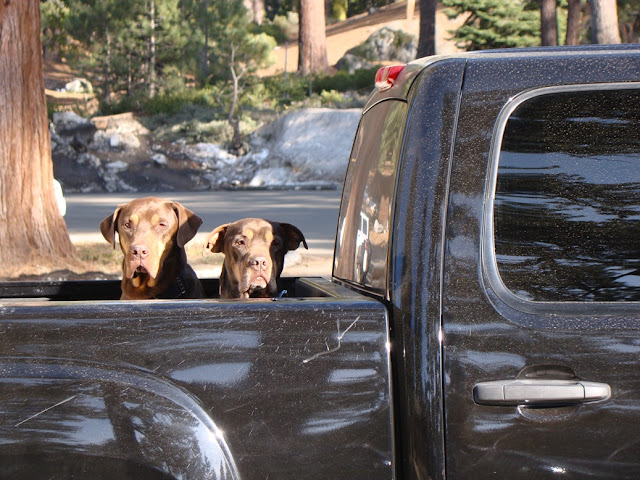 I hate to admit I haven't visited Sequoia/King Canyon. The bark on the Sequoias doesn't look as rough and corky as the Redwoods.

It tends towards being stringy and fibrous.

Thanks for sharing these wonderful photos and descriptions of the 'redwoods' - simply magnificent trees. I've been to both places, by the way, and been wonderfully overwhelmed. Great post, Garry.

Great article, I will send it around. Having been stationed while in the Air Force at Cottonwood, Idaho, I had the dubious experience of fighting forest fire on the nexe river north of the Snake River (Hells Canyon), the Salmon River otherwise known as the River of No Return. I hunted deer on Joseph Plains, the plateau of land between the two rivers. Now I live in Fresno, CA (Dunlap ar first and now Reedley) near the Rio de Los Reyes Magos (Kings River) and would like to mention the wonderful trip up past the Big Trees in the Kings Canyon Park to the End of the Road right up against the backbone of the Sierra Nevadas.

My favorite place going all the way down hwy 180 into ceder grove, and do some catch & release.

Hell's Canyon is very deep, but when you are down in the bottom of it it does not seem that way, because the highest ridges on either side are so far back they usually are not even visible.