Variations on Orange: Still Back of Beyond, but coming home... 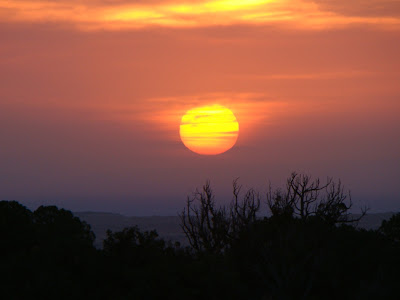 Another very brief bit of access to wifi in the back of beyond in Utah. We're on day 15 of a 17 day trip across the Colorado Plateau, and I've had all of three opportunities to post anything. The fires out across the west are devastating, and we've seen them in the distance ever since we were in Colorado five days ago. They have accompanied every sunrise and sunset since. The first picture is sunrise from the Juniper Basin campsite at Arches National Park. 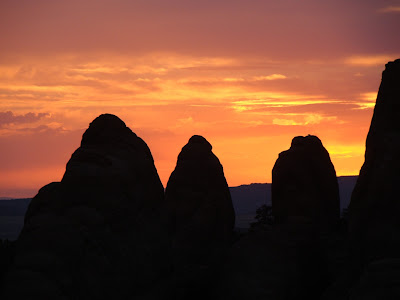 The second picture is sunset from the Broken Arch Trail out of the campground at Arches...

The third study in orange is fire captured in rock, in a sense, at Bryce Canyon National Park. I was on the Wall Street trail looking at one of my favorite sets of trees, the ones who've survived in this deep slot canyon among the hoodoos of the Paleocene-Eocene Claron Formation, one of the younger formations on the Colorado Plateau. 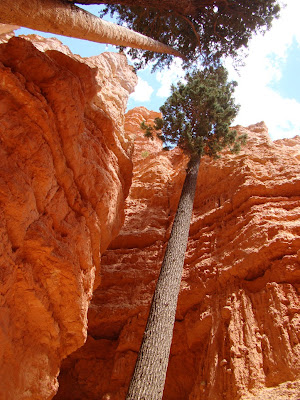 Three long driving days, and we'll be home. I'm not expecting any wifi access, but who knows. If you are wondering about the answer to the quiz in the previous post, Ron Schott got it, the Kasha-Katuwe Tent Rocks National Monument. The rocks look much like those at Cappadocia, but they aren't as extensive, and no one is living in them!
Posted by Garry Hayes at 10:13 AM

When you get home, there's a new geomeme that's I think you'd enjoy contributing an entry to.