Someone's really put their foot in it: Wednesday's Whatsit solved 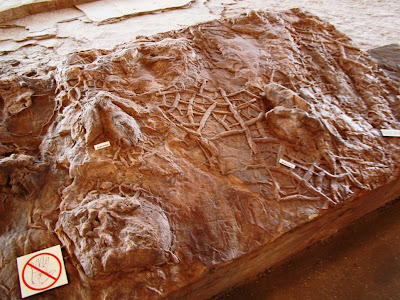 Call me deeply impressed. With two things really, the insight of the commenters who guessed at the identity of the Wednesday Whatsits, and with the City of St. George and its civic-minded citizens, both the landowner and the volunteers who have constructed a pretty incredible museum. 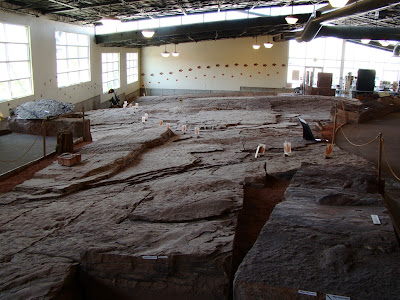 In 2000, a local optometrist, Dr. Sheldon Johnson was trying to level a hilltop on his property in St. George. If you live in a place of thick soft soils and deeply weathered sediment, you should know that leveling a hilltop in the desert of southwest Utah is a challenging proposition, involving huge slabs of solid sandstone and heavy-duty equipment. As Dr. Sheldon overturned a big slab, he noticed strange indentations that he recognized as a dinosaur track. As more and more tracks were exposed, it was dawning on everyone concerned that this site was extraordinary. The Johnsons eventually worked with the city and other governmental entities to preserve the site, and the present Dinosaur Discovery at Johnson Farm Museum is the happy result.

Did I say extraordinary? Aside from intact pathways of walking and running dinosaurs filling out much of the museum open space (above), some of the tracks are so well preserved that they display claw shapes and dinosaur skin impressions! 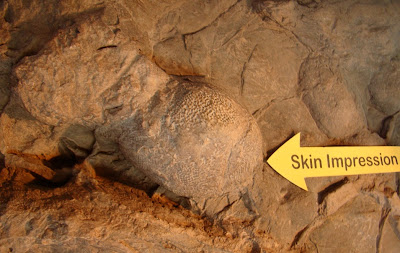 The curators have done a pretty incredible job preparing the slabs for research and display. The picture below shows the raw material they have to work with. 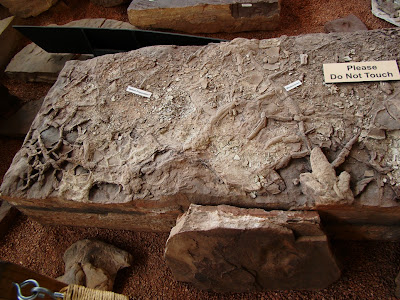 The picture below shows a typical result, which was the first of the Wednesday Whatsits. As several of you noted, it is a cast of mudcracks with a big dinosaur track at the center. An even bigger track can be seen at the left side. These rocks are part of the early Jurassic Whitmore Point and Dinosaur Canyon members of the Moenave formation, about 195-198 million years old. A lake covered the region, and dinosaurs haunted the margins. 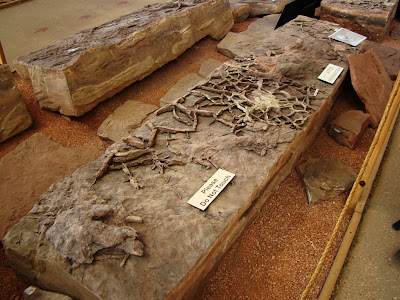 And some of them went fishing. The second whatsit was a group of slabs with swimming marks made as the dinosaurs were stepping into deeper water and starting to float. These kinds of features are quite rare, as you might expect. 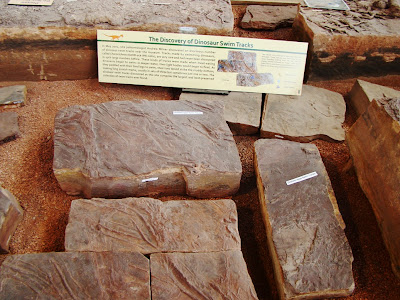 I have to say that what impressed me most was the extra effort to educate museum visitors. One has to admit that a staple of dinosaur exhibits involves giant replicas of dino skeletons posing in such a way as to suggest that they are ripping each other apart. When is the last time you were in a dinosaur museum that actually emphasized the sedimentary structures and environmental indicators in the rocks? They devoted a lot of space to an explanation of rill marks, flute casts, load casts, and ripplemarks. And it was done well. 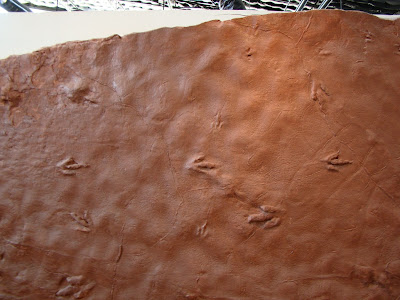 The cost is modest, and well worth it if you are ever passing through St. George on the way to Zion or Bryce. The website for the museum can be accessed here: http://www.dinosite.org/default.htm. They are at 2180 East Riverside Drive in St. George, Utah 84790 For Info: 435-574-DINO (3466)

thanks a lot, Garry, for posting this! I'll be in Utah this summer, and have already started re-juggling my route to take me through St. George.