A Day on the California Prairie: Finding the Precious Places Near Home 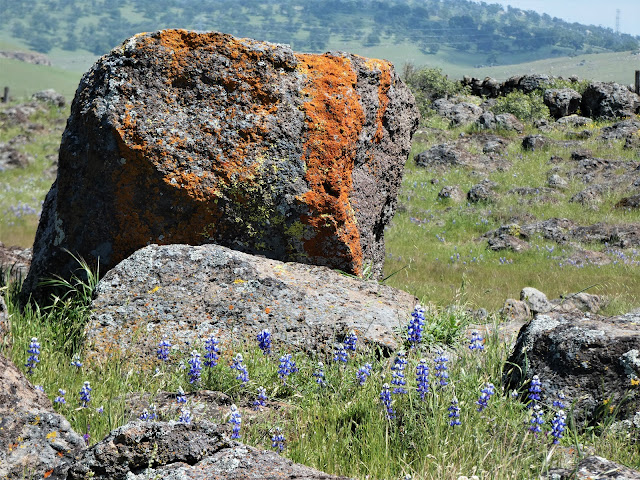 Yosemite National Park is closed. The coastline is closed. The state parks are closed. Am I complaining? Not in the least. We are facing an unprecedented threat, so we must curtail our freedoms a bit until the scientists and the doctors (and all of their heroic support staff from nurses to foodworkers to custodians) can do their work protecting us. And we must continue to do our part, isolating ourselves from each other, and from the virus itself. I pray that you are able to stay healthy and safe, and if tragedy strikes, that you find peace in some way. 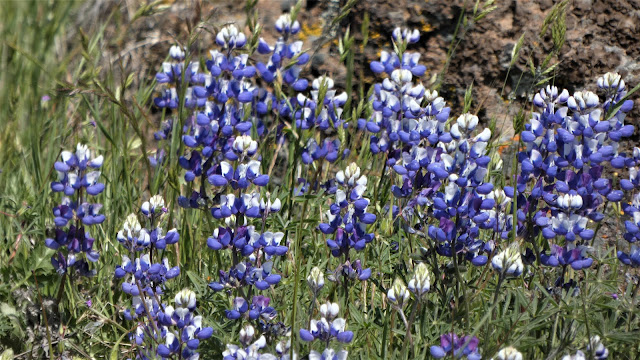 In the meantime, there are a few legal ways to maintain sanity. Exercising in isolation from others near home is one way. If the city parks are crowded, find a deserted road on the edge of town to walk along. It is a way that we can find the precious and undiscovered treasures that have always been just outside our towns. As it turns out, some treasures are ephemeral, lasting only a few weeks. 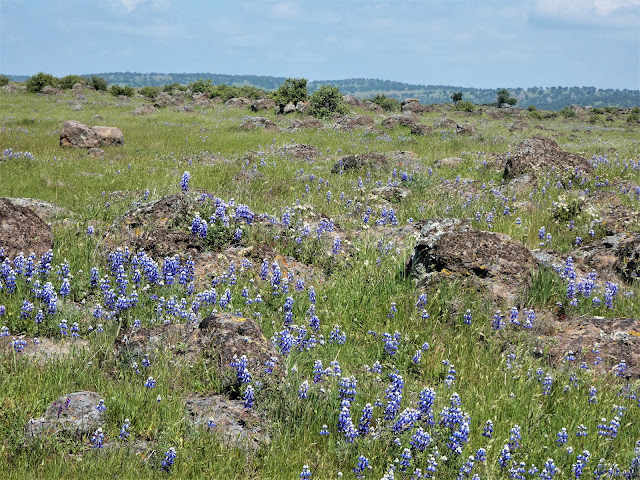 My town lies on the edge on one of the few remaining largely untouched prairies left in California. These prairies used to extend across the entire Great Valley, but agricultural development has displaced 95% of the grasslands. There are a series of wildlife refuges up and down the valley that protect some of the remaining wildlands or rehabilitated farmlands. The rest of the prairie tends to be found on the margins, in the foothills of the surrounding mountains where the soils are too thin to support agricultural development. 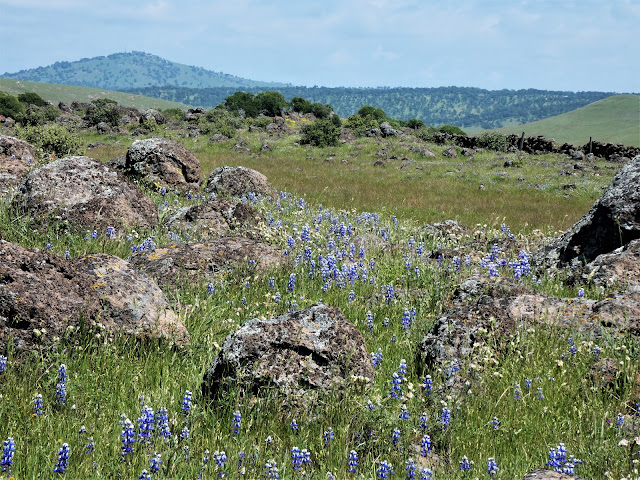 The rainfall this year has been perilously low, with not a drop in the entire month of February. But March and April saw a resurgence in precipitation and the drying sprouts reawakened, and flowers have appeared in abundance throughout the Sierra Nevada foothills. 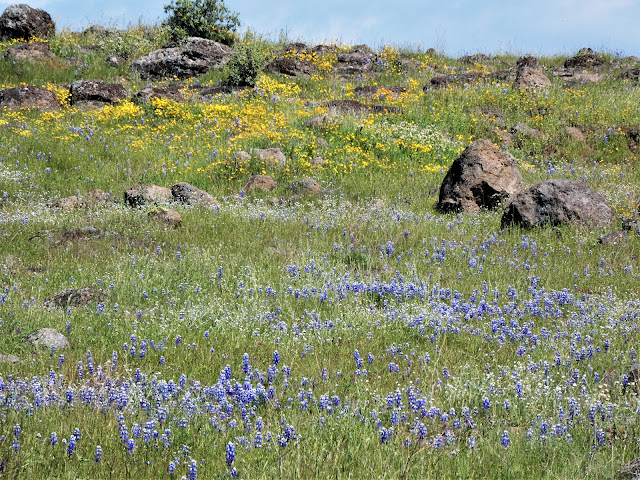 We took a drive through the prairie that remains between the Tuolumne and Stanislaus Rivers, and were treated with an explosion of color. I'd love to say I was an expert botanist and tell you all the species, but beyond lupines and poppies, my knowledge of flowers is sadly lacking. What I enjoyed today was the profusion of color. 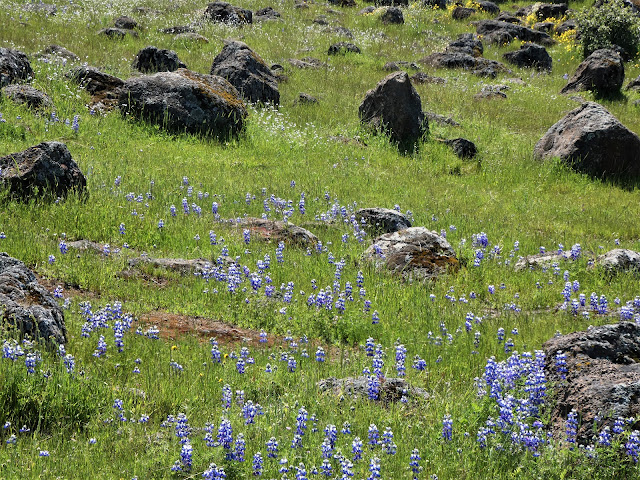 We are living in one of the most challenging times many of us will ever experience short of all-out war. Natural disasters horribly affect particular regions, but there is always help from elsewhere, and there are places of retreat and refuge if an earthquake or hurricane strikes. But this one is a worldwide viral attack, and all we can do is shelter in place until it passes. It's scary, it's dangerous, and many are suffering. I hope there are a few moments of peace and serenity to be found here in these little treasures close to home. 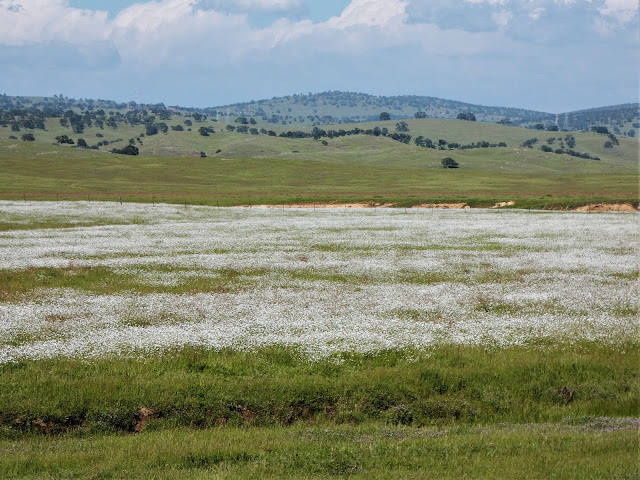 Hi Garry,
What a lovely posting & pictures. I am doing the same here in southern Utah, enjoying the beauty within an hour or so of home. I will hike with 1 or 2 others and we drive our own cars. BTW - I took my blog down a couple of years ago but am still Watching For Rocks everywhere I go. No longer with NPS but have been teaching geo labs to non-majors for 7 years now. The last few weeks have been interesting - trying to teach labs online! Google Earth was the ticket that allowed students to finish early. I would like to return to Yellowstone this summer for a visit but that remains to be seen. Hope all is well with you in your corner of this uncertain world.
Cheers and good health, Nina

So great to see floral color!, nothing like it in Laramie yet. We're lucky though ... most of my usual destination are sparsely used, especially after the U sent students packing (finishing online somewhere else). Even with drabness and cold it's great to get out.
You said you aren't into plant names, which I can totally understand. ID gets in the way of enjoyment for me too. But I have to ask! What's all the white in the final photo? Flowers?
cheers

I'm afraid I don't know the white carpet flowers, Hollis. And Nina, it's good to hear from you! I'm glad to know you are still out and about. Good luck with the teaching!

The rocks are darker than granite I associate with the Sierra. Are they volcanic?

The rocks are indeed volcanic, part of a lava flow that started at the Dardanelles near Sonora Pass and flowed 60 miles (!) to the Knight's Ferry region.