The Islands of Interior California: There's a Reason I Don't Hug Ducks 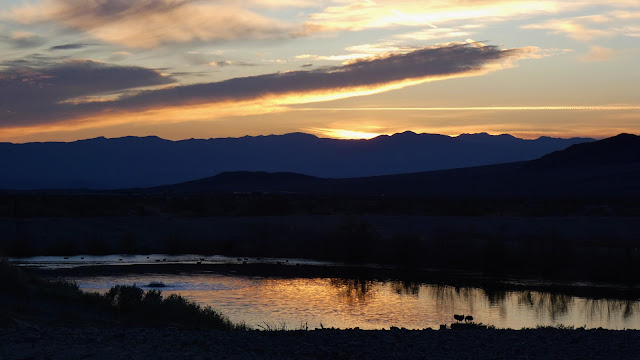 There are islands in the interior of California. They aren't islands in the normal sense of the word, and are actually pretty much exactly the opposite. In the great California Desert, consisting of the Colorado (Sonoran; also the Lower) Desert, the somewhat higher Mojave Desert (the "High" Desert), and the Basin and Range, there are islands of water. And it is water, of course, that makes life possible in these harshest of climates. 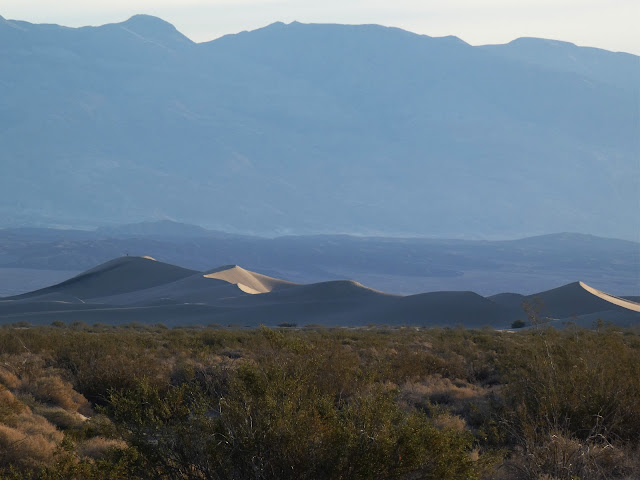 Stovepipe Wells in Death Valley National Park is one of these islands. Tucked along the base of Tucki Mountain at the north end of the Panamint Range, Stovepipe Wells is a small resort complex consisting of a hotel/restaurant, bar, store, gas station, and campground. The resort is not actually at the location of the original Stovepipe Wells. That locality was located several miles to the northeast on the other side of the Mesquite Dunes. Death Valley is the driest place in North America and the hottest place in the world. It is also the lowest region in North America, and this leads to some unexpected discrepant facts. There is actually lots of water in Death Valley. It doesn't come from the rainfall, but instead it comes from the ground. Water underground tends to flow downhill from higher elevations, and Death Valley is the lowest place there is, so springs flow in unexpected places. And even if there are no springs, the water may still be only a short distance beneath the surface.

That was the case for the Old Stovepipe Wells. At the edge of the sand dunes, there was a low spot where a bit of digging and scraping could cause fresh water to flow to the surface. The spot was utilized in ancient times apparently, but it was more developed in the mining days of the late 1800s. It was the only water source on the floor of Death Valley between Furnace Creek and the mining towns of Skidoo and Rhyolite. Dunes sometimes obscured the site, so it was marked with an old stovepipe, hence the name.

The water at Old Stovepipe Wells was of variable quality and could apparently be dangerous at times. According to one account, "...the water is very low in the spring, is of a yellowish appearance and intensely nauseating in taste. Its odor is very disagreeable, and it can be smelled for half a mile away." The man went on to describe getting very sick and nearly dying before reaching his destination fourteen miles away. One of the problems is that the water became stagnant quickly and that it was important to drain away the fetid water so that fresher water could flow into the hole. Although there were efforts to develop the site, it was clear that Old Stovepipe Wells was not going to become a permanent resort. 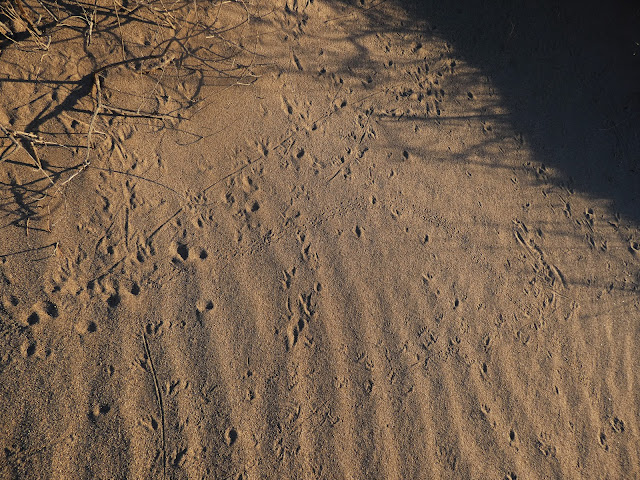 There is no information that I could uncover regarding natural flora and fauna around the original Stovepipe Wells. There no doubt was life of some kind, but none is recorded. During my stays at Stovepipe, I've wandered the dunes and found plenty of evidence of life in the early morning sun. Tracks of insects, reptiles and mammals cover the rippled sands. But for the most part the life remains hidden during the day, burrowing underground to escape the harsh surface conditions. It's a little trickier for birds, and they are not often seen in the dune environment. Despite decades of observations, birdwatchers have reported a mere fourteen species at Mesquite Dunes.

But the modern resort of Stovepipe Wells a mere two miles from the dunes? The total number is species reported there is 197! How in the world is such diversity possible? It's the water of course, but perhaps not in the way that you might think. Fresh water is now pumped from deep underground, providing plentiful clean water for the resort. They don't waste the water (aside from the swimming pool perhaps) having little in the way of landscaping (just a few tamarisk trees around the property). There are no open water sources for birds. For years I've camped at Stovepipe, and I've seen only Common Ravens and the invasive and ubiquitous House Sparrow that seems to follow humans wherever they go. I was intensely curious where all the other birds must be hiding, and this year it finally occurred to me. 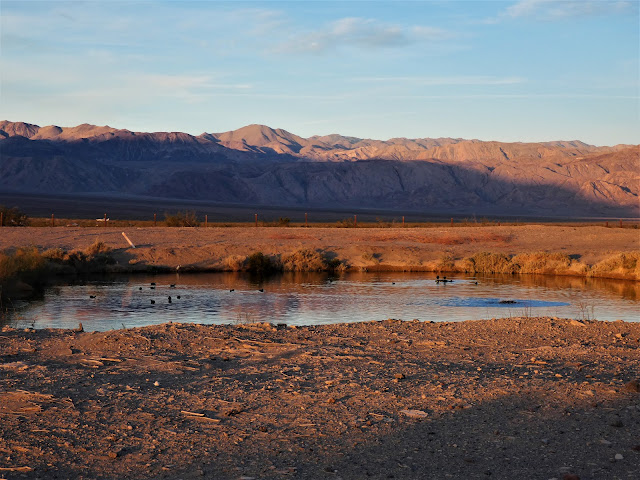 One of the things they never tell novice birders like myself is about the absolute best place to see birds. It's not, as one would imagine, standing at the edge of a beautiful meadow with the forest and dramatic snowy peaks in the distance. And it isn't necessarily along the crashing surf near coastal estuaries. It's sewage treatment lagoons...really. Back home, the sewage treatment ponds at Modesto host 234 species. The nearby National Wildlife Refuge has fewer than 200.

Consider. A resort, even a modest one like Stovepipe, produces thousands of gallons of liquid waste and sewage every day, and by law the water must be treated. One of the best ways is to use settling ponds and bacteria that consume the worst of the waste material. The treated water can then be allowed to soak back into the ground where the sand and silt provide a natural filtering effect. The sewage lagoons have to have open ponds, and these are the "islands" that attract the multitudes of bird species that have been spotted here over the years. One can imagine that some birds memorize the localities and return during migrations, while other are desperately lost and find the settling lagoons entirely by lucky chance. Some species can be seen daily, while many others were one-time "accidents" and haven't been seen in decades. 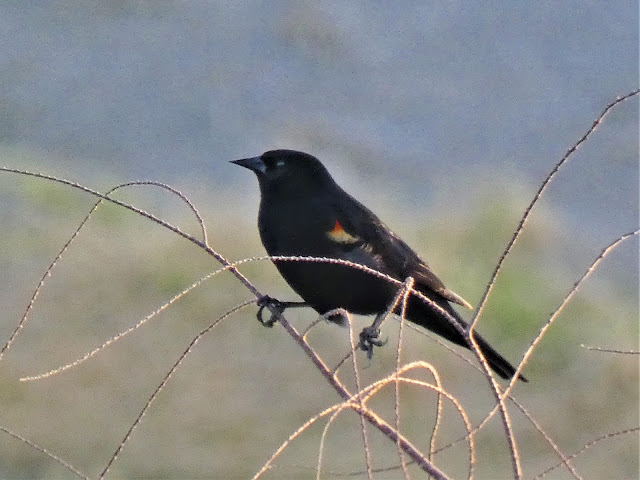 Once I figured this out, I made sure to explore the vicinity of the sewage ponds at sunrise before most of my students were up and preparing for the day. For the record they did not smell terrible as one might think. But they finally provided me with some interesting bird species, including the Red-winged Blackbird (above), dozens of American Coots, a Blue-gray Gnatcatcher (below), the ever-present Common Ravens, a Say's Phoebe, a Great-tailed Grackle, and a Black-throated Sparrow, a species I never see back home in Modesto. 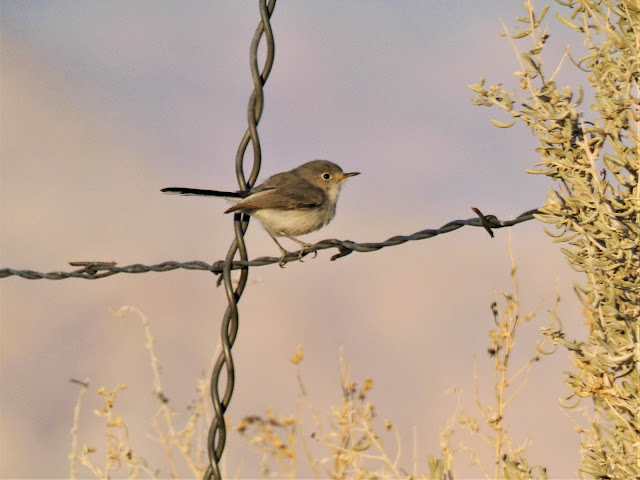 On the final morning of the trip, I saw the birds that inspired the title of today's post. There were four Cinnamon Teals in the pond. They are among my favorite ducks, given their unique coloration. But despite knowing that the water is not necessarily putrid, I still would not be thrilled with grabbing them close and hugging them. That's just asking for trouble in many ways... 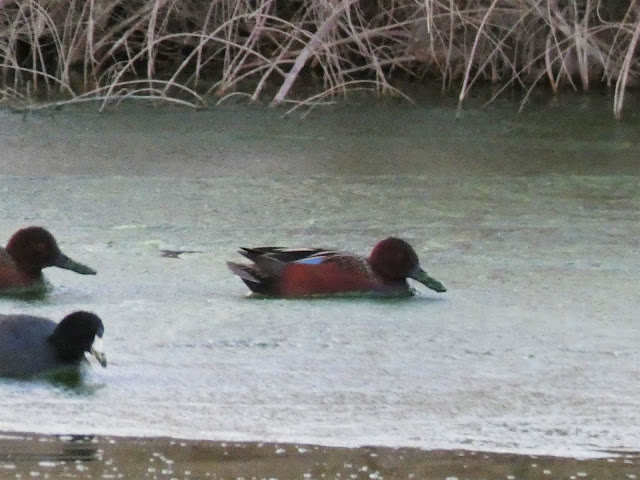