Pele is a Capricious Goddess...Part One (A Return to the Realm of Fire)

Note to my Geology 190 Students: this IS NOT a picture from my current visit. Lava is NOT flowing this way right now. I offer NO GUARANTEES that anything we see on our trip in two weeks will be anything like this. The reasons are described below....
For everyone else: I wish you could join us! We are headed to the Hawaiian Islands in a few weeks so I am revisiting some posts from 2009, when our students last joined me. I've made some changes to the original post and added lots of photos.

Pele is the volcano goddess on the Hawaiian Islands, and she is a powerful deity in the lives of the islanders. Think about it: the only substantial piece of land above sea level for thousands of miles in all directions is the result of volcanic eruptions that built the islands up from ocean crust lying beneath 3 miles of ocean water. All existence on the islands starts with volcanic creation, and all is lost when the volcanoes ultimately die out and fall prey to the waves and weathering. These beliefs demand a certain amount of respect when paying a visit to the islands.

The title of my post is meant in a slightly humorous vein, but my experiences in four trips make me start to wonder. Let me explain... 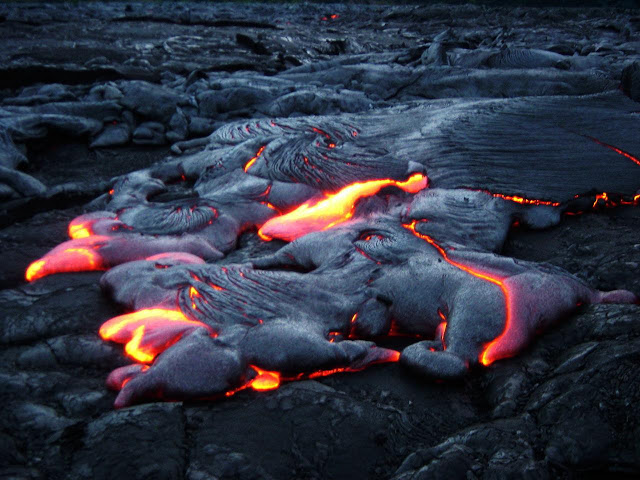 My first trip to the islands was in 2002, and I was full of hope that I would get a chance to see a lava flow, even though there seemed little chance of it from reading the 2002 status reports from the Hawaii Volcanoes Observatory. Lava had not reached the ocean for many months, with activity confined to the region around Pu'u O'o many miles from any roads or trails. Then, just prior to my plane flight, lava started flowing rapidly down the slopes of the shield, and began pouring in a spectacular manner over the Pulama Pali (a 500 foot fault scarp/cliff) and onto the coastal plain...only a mile from the end of Chain of Craters Road! At one point seven streams of lava were pouring over the cliff! And the lava was now crossing the coastal plain on the way to the sea. I was going to see an incredible show!

The lava flow had started the largest forest fire to occur in the park in 15 years. And the fire fighters had to close Chain of Craters Road to provide access for their fire-fighting equipment. I was not going to see the lava flow! I was crushed, frustrated beyond reason!

Being a Californian, I expect that firefighters work day and night to fight fires, but Hawaii was different. The crews shut down at 5:00 PM, and went home for a nap. The road opened. I, and hundreds of other people drove the road in one long stream of cars, and started hiking over the older flows towards the new flows, now only a quarter mile from the ocean. We could walk right up to the edge of the oncoming flow and feel the intense heat. It was not moving fast, only a few inches a minute, but it was hypnotic. There is nothing quite like standing at the edge of a new creation, knowing that this was how these islands came to exist, one flow after another, after another until they are tens of thousands of feet thick, finally emerging from the sea. The new land provided a platform for the survival of the living flotsam and jetsam that once every few thousand years washed up on the island. These pioneers eventually evolved into the complex ecosystem we see today in Hawai'i.

This was not the first time I would experience Pele's fire. I've made a number of journeys to the islands in the years since, and every visit to Pele's realm was unique, and in one particular instance, downright mysterious and a bit mystical.