Airliner Chronicles: Stuck on a Plane with a Proselytizer... 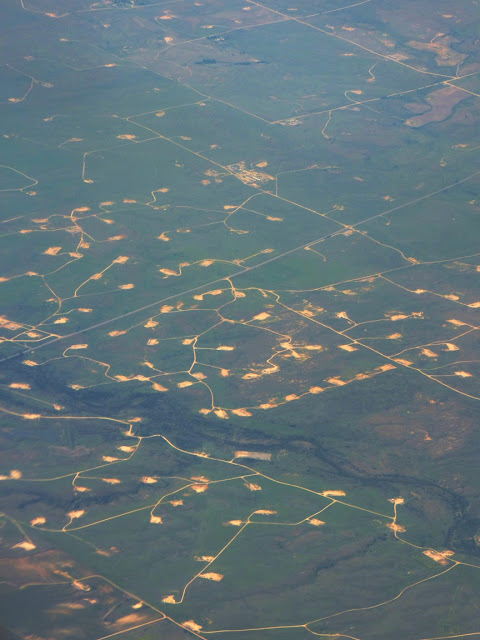 And really, I felt sorry for the poor guy who was stuck sitting with me on the plane flight from St. Louis to LAX. Oh, I wasn't trying to convert the poor guy into some religion. No, he got the full-court press from me about the importance of understanding what was going on 35,000 feet below us on the ground. He was being proselytized into the world of geology.

People who fly a lot for whatever region may be forgiven for not paying attention to the grand panorama unfolding below them, but to a geologist, the extra dimension is pure gold. Seeing a large swath of the Earth's surface grants a whole new perspective to understanding geological processes.

I didn't have a working GPS on the flight, so I had to guess our location for the first two hours of the flight, somewhere over Missouri, Oklahoma, or Texas. But it was unmistakable that we were over oil and gas country. The drilling rigs and their connecting roads could not be missed. Some politicians once described the "footprint" of oil and gas drilling on a landscape as just a few acres being torn up. Seeing the scene from above suggests that the footprint is "small" in the sense that a spider web is a few strings of dragline silk. 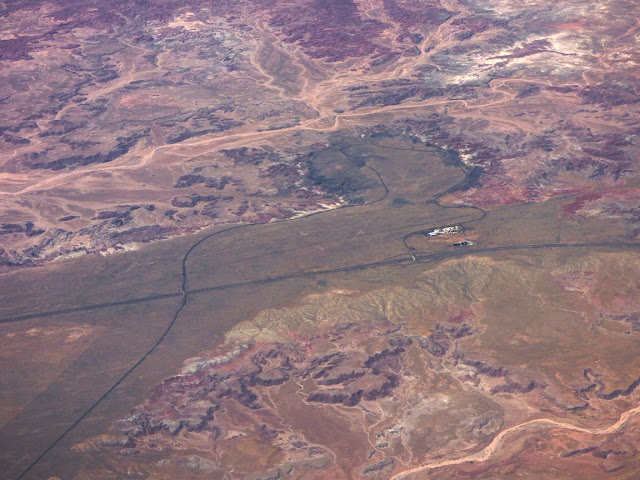 I was lost until the mesas and plateaus appeared. I knew at that point that we were in New Mexico, and I correctly figured out that we passed Sante Fe and Las Vegas, New Mexico. My seatmate, a Pittsburgh resident, got a bit confused about the Las Vegas part; "We're in Nevada already?". I crushed his hopes (that is NOT the way to proselytize, by the way).

The landscape turned into a rainbow of color, and I suddenly knew our precise location better than a GPS unit. We had reached the Painted Desert area of Petrified Forest National Park in Arizona. A plateau covered by basalt flows was breached by erosion, exposing the brightly colored layers of the Triassic Chinle Formation. The Triassic rocks reveal the beginnings of the dinosaur domination of our planet, and the floodplain and river deposits contain some of the earliest dinosaur species known. There is the wood, of course, and a stunning variety of amphibians and reptiles, including Phytosaurs, huge crocodile-shaped creatures that exceeded 30 feet in length. 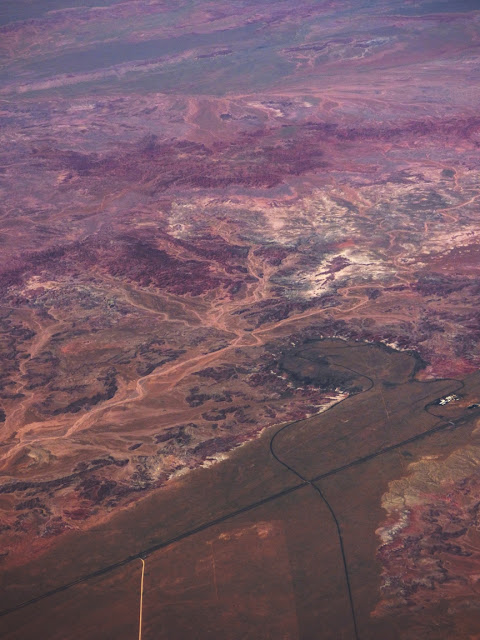 Just west of Petrified Forest, I got the finest treat of the day, a perfect view of Meteor Crater. I put the best of the pictures up in yesterday's post. 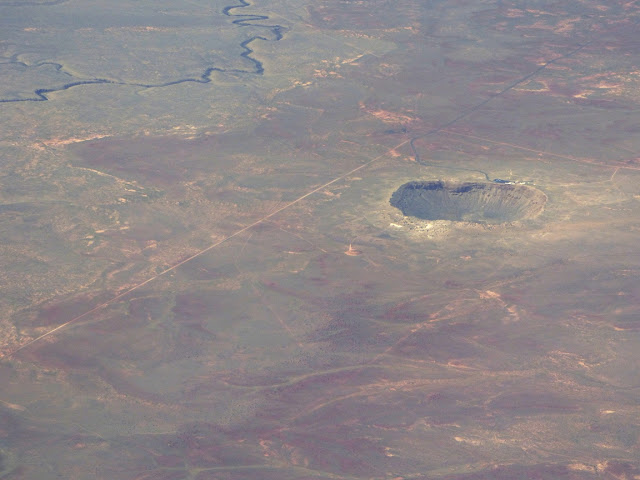 A short time later, more colorful rocks came into view, but they were older than the Chinle of Petrified Forest. We had reached the Pennsylvanian and Permian rocks of the Supai Group. These rocks are the same ones exposed in the walls of the Grand Canyon, about eighty miles to the north. This is the edge of the Colorado Plateau, where the high flat landscape gives way to the deep fault valleys of the Basin and Range Province. Because the valleys are so deep, erosion eats away at the edge of the plateau, forming scenic deep gorges like Oak Creek Canyon, north of Sedona. 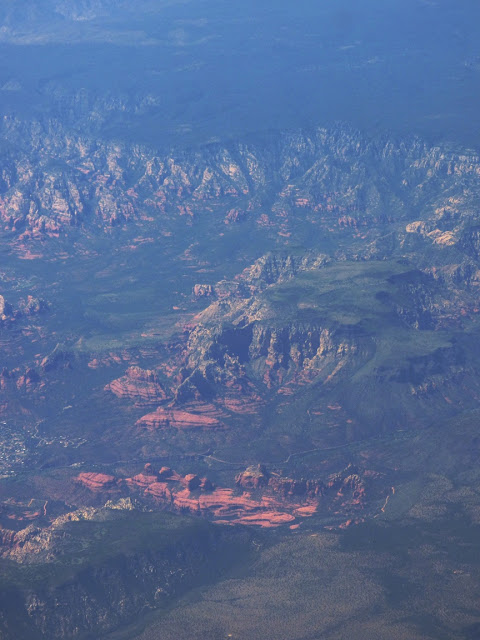 I was distracted by some wildfires burning in the thick forests of the plateau. I finally realized I was missing one of the more extraordinary features of the Colorado Plateau, the San Francisco Peaks Volcanic Field. The field is a vast basalt lava plain populated by hundreds of cinder cones, and an immense stratovolcano that reaches more than 12,000 feet in elevation, the highest point in all of Arizona. The edifice of the San Francisco Peaks has been altered somewhat by erosion; it was once 4,000 feet higher. It would have been the highest point in the lower 48 states. 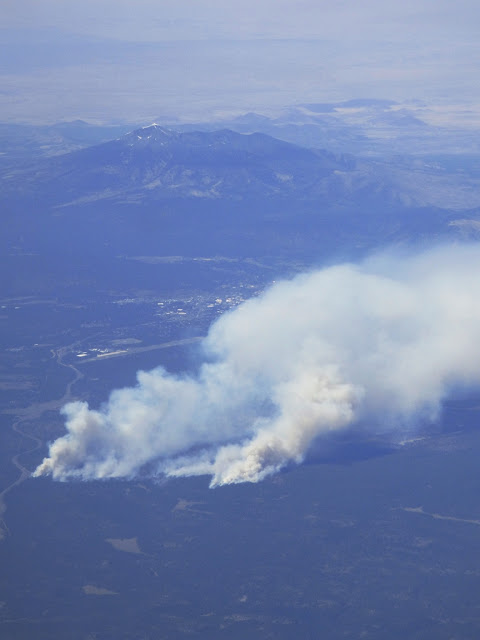 The existence of the volcanic field is somewhat of an enigma. There's no obvious reason for it being here. There are suggestions that it is the result of an incipient hot spot, but the idea is not wholly accepted. The field is active; an eruption took place less than a thousand years ago. 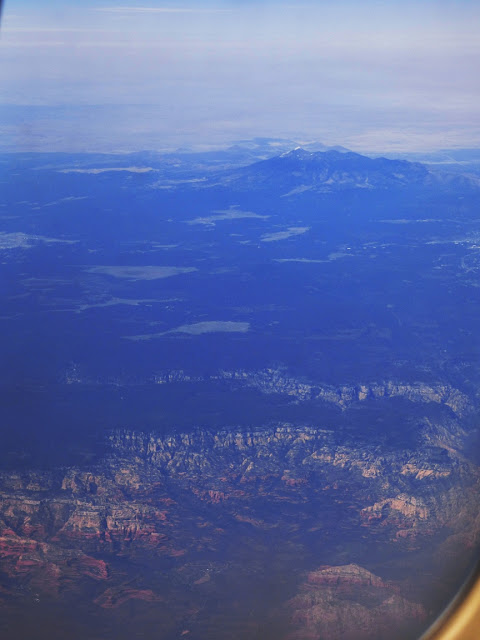 Somewhere near the end of the flight, my poor beleaguered seatmate asked a geological question. He was wondering why there was a gigantic hole in the ground that wasn't a meteor impact crater. It was an open pit mine, probably for copper. I almost had a convert to the ages of rock!
Posted by Garry Hayes at 11:19 PM

Wow that oil field is scary! What incredible views you captured! Glad you probably made a convert!

I feel the same way about flying. Always a window seat. I usually get a sore neck from craning in one direction the whole time. I fly to Boston in August. I hope I picked a good side of the plane to sit on. My jaw would have dropped if I saw Humphrey's and Sedona like that.

I had a moment on a flight like that which was supposed to go from Dallas to Memphis, Tennesse, where I would get a connecting flight to Indiana. I was looking out the window of the right side of the plane and suddenly realized that we were flying north into Oklahoma. I recognized first the Arbuckle Mtns and then the ridge-line folds of the western Ouachitas. I asked the flight attendant what was happening (I'd just flown south from OKC and didn't want to go back) and got a dirty look back. A scant few minutes later the pilot came on and said we were travelling north to get around some severe thunderstorms. Even so the descent into Memphis was filled with rain and lightning.