It's Like a Disaster Movie...sort of. Put Aside May 21st!

You all know how the plot of a disaster movie plays out...amid the destruction of the city, the world, the solar system, a small plucky group of survivors goes about surviving, the concerns of the few outweighing the needs of the many, so to speak. That is how I felt this week as I come up for air (briefly) to explain my absence from any kind of blogging for the last week. We moved our science division, a gargantuan task involving dozens and dozens of people working under a strict deadline. But like the disaster movie concentrating on a small plucky group, I offer a view of the move from the point of view of our little geology department. I'm not saying it was a disaster, by the way, it was quite the opposite. It is a great triumph for our community.

Read to the end for an invitation! 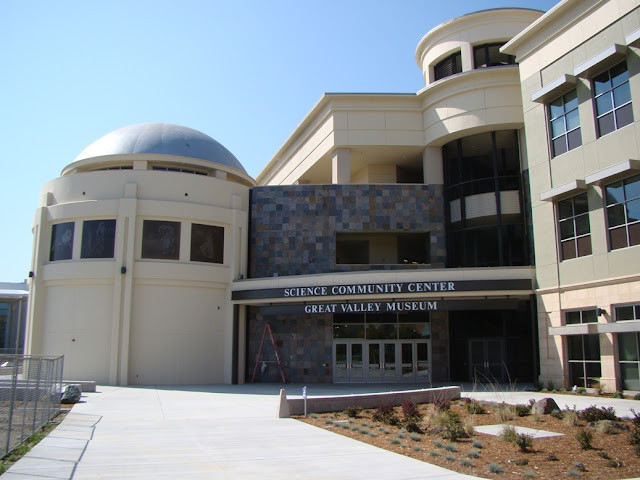 The Science Community Center is the realization of a vision developed by the faculty and staff of the Science, Math and Engineering Division at Modesto Junior College thirteen years ago. Like a disaster movie, it looked at times like it would never happen, or if it did, it would never resemble the original vision. But it did happen, and it happened because our community, the towns of Stanislaus County, decided to pass a bond issue to renovate the college campus, including the construction of the SCC. There were losses...because of the recession we don't even have an engineering department anymore despite the name of our division. But in the end, the project was completed, and the vision was largely intact. We now have one of the finest science teaching facilities to be found at any community college in the state of California. We have a planetarium, an observatory, a new museum, and classrooms and labs for biology, chemistry, physics, astronomy, earth science, and geology. And all because of the support of our community!

So here is how things played out with our plucky group of geologists! More than a dozen geology students volunteered their time to make this happen (it just couldn't have happened without them). 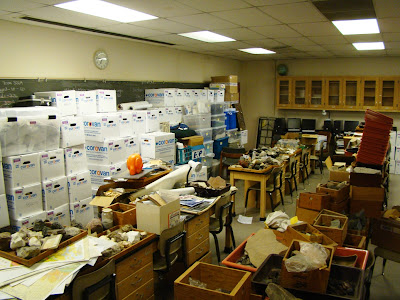 The old department had to be packed up. It was an astoundingly complicated task with the accumulation of a quarter-century of books, rocks, minerals, fossils, and paper. Lots and lots of paper. We let lots of stuff go, but we still ended up with 200 boxes, and dozens of wood trays filled with big rocks. 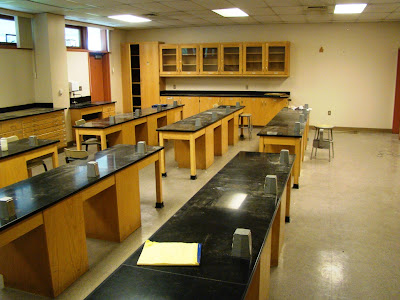 And then last Monday, it disappeared as the moving crew picked it all up and transported it to West Campus at the other end of town. It was a shock to see an empty room where I had been teaching for the last 15 years or so. 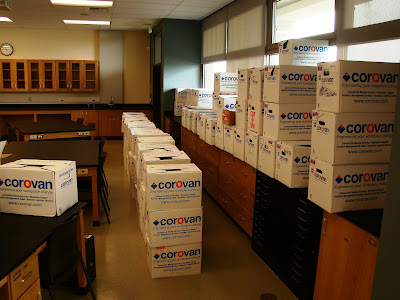 All of the boxes magically appeared in the new facility, and the work began of unpacking them and organizing the new laboratory. The geology students once again proved their worth! 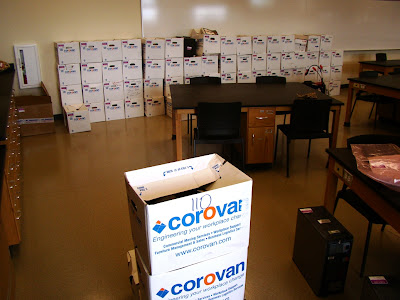 For a time the geology lab looked as chaotic as the old one did, but a week of spit and polish fixed it up nicely! 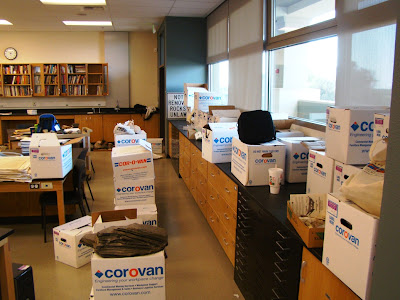 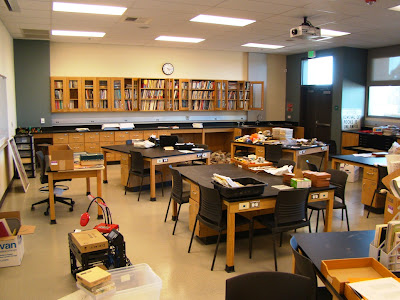 And by Friday, the new lab was ready for the fall semester! 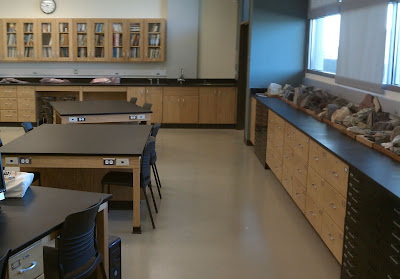 I even found a few minutes to put up some preliminary exhibits in the display cabinets on the third floor landing outside the geology department. We want the department to look good this week, because... 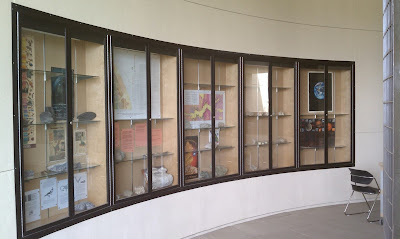 ...Tuesday, May 21st is our long-awaited Ribbon-Cutting Ceremony! If you are in the Modesto area, come out at 10 AM and take a tour, and see what can happen when a community chooses to support education!

Lots of work and a supportive community has paid off. Looking good.