Adventures in a Roadcut: It's All in Your Point of View 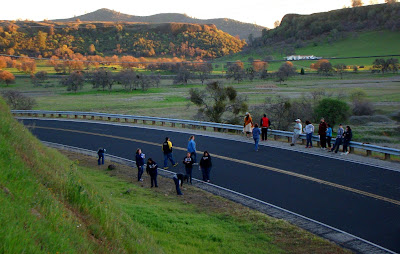 It's March in Central California, which makes for a really fine time for a geology field trip. We headed east into the Sierra Nevada foothills for a look at some Mother Lode history. For those of you not familiar with the history of California, the Mother Lode was the site of one of the world's greatest gold rushes, starting in 1848 with the discovery of gold flakes in the American River by James Marshall. Ultimately several hundred thousand people made the difficult journey to California to try and find their fortune. As is often the case with such things, only a few ever really prospered. We traveled through Hornitos, an off-the-beaten-track gold era town with some beautiful old ruins, and then followed Highway 49 from Mariposa to Coulterville and then to the hills near Jamestown. 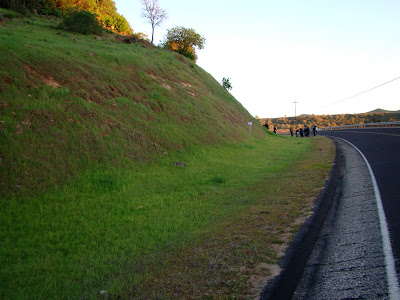 The sun was getting low in the sky when we reached our last stop of the day on Peoria Flat Road outside of Jamestown. It's a neat little mystery for the students to work with, and a great lesson in the need for alternate points of view when problem-solving. 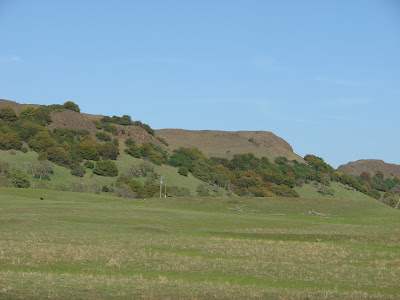 We had spent much of the day in typical rolling hills of the Mother Lode, and crossed several deep gorges, including the Merced River which flows out of Yosemite Valley. When we reached Peoria Flat, the landscape was different. The hilltops were flat and barren, even mesa-like. The flat hills were topped with some kind of dark brown rock that was unlike any of the the slate and serpentine outcrops we had been seeing all day. We found a spot where the road crossed through the flat-topped ridges and had a closer look at the dark rock and the sediments underneath it. 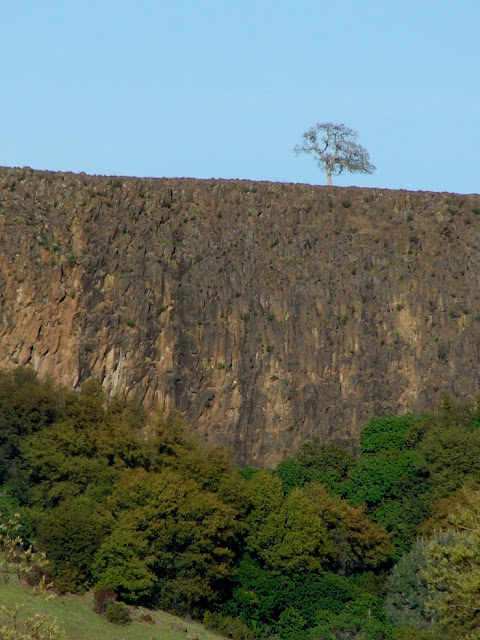 The students found that the dark rock was volcanic, and unweathered surfaces were nearly black. At their level (physical geology or historical geology), black volcanic rock usually equals basalt, though additional study would show the actual composition of the rock to be more along the lines of latite or trachyandesite. The rock underneath the ridge turned out to be conglomerate, with clasts composed mostly of a variety of rounded volcanic rocks. They were clearly deposited in a river. So we had something strange: a flat-topped hill composed of river gravels and topped by a volcanic flow. How did a riverbed and lava flow end up as a ridge?

The best clue to understanding this strange relationship is a different point of view. Several years back, a friend with a plane invited me on a flight over Sonora and Jamestown, and we flew right over the strange outcrop. I knew exactly what I was seeing because Table Mountain is a famous example of an inverted stream.

Nine or ten million years ago, the Sierra Nevada was a lower mountain range with a series of volcanic centers near the crest at Sonora Pass that would have resembled a region like Lassen Volcanic National Park. One lava flow was unusually long, some 60 miles, and as such had followed a stream canyon that had been occupied by the ancestral Stanislaus River. The lava displaced the river to something closer to its present pathway, and as the mountains rose and tilted to the west, erosion stripped away the softer rocks surrounding the lava flow. The old river bed became the flat summit of the Stanislaus Table Mountain; it had become an inverted stream.
It was a beautiful day, and the flowers are ready to bloom. It's a really good time of year for geology problem-solving!

I have always found it intriguing that early geologists and explorers figured out so much without that aerial perspective.

There are inverted valleys all over southern Utah, too. Your final image says it all.

What are the patterns on the crest? -- spots in the near view and then lines in mid photo? I looked at more views in Geotripper images, but couldn't figure it out.

I understand that the surface does not really preserve surface flow features of the lava, but they may represent internal flow structures in the lava that have been highlighted by erosion.