Hidden Right Under My Nose: A gem outside Page, Arizona 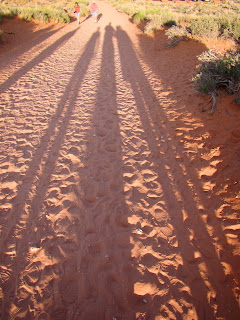 It must have been so frustrating to be among the first Europeans to explore the Colorado Plateau, whether a Spaniard, a Mormon, or Mountain Man. It is so easy to get around on a vast plateau, because everything is so flat. Except that this is no normal plateau. Every time an explorer came to a river, it was almost always ensconced in a valley hundreds or thousands of feet deep, with vertical cliffs separating the travelers from the life-giving water below. Even worse, the deep canyons were a serious impediment to travel. Even as late as 1928, there was only one place where a vehicle could cross the Colorado River between Moab, Utah, and Needles, California, and that crossing was by ferry (Lee's Ferry to be specific). 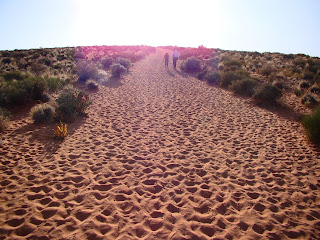 The rivers were just as confusing for the first geologists who explored the region, like John Wesley Powell, Grove Karl Gilbert, and Clarence Dutton. To geologists who had grown up with well-integrated river systems like the Mississippi or Ohio, these western rivers made no sense at all. The rivers crossed mountain ranges, or entered mountain ranges, only to swing around and exit the mountain range on the same side. The general landscape would slope north, yet the rivers flowed in canyons that sloped south. Huge abandoned dry channels littered the landscape, with no rivers anywhere nearby that could have carved them. It was a puzzle to be sure, but the work of Powell, Gilbert and Dutton to try and solve that puzzle led to our understanding of many basic principles of geology, including graded streams, antecedent streams, superimposed streams, base level, and isostasy. But as hard as they struggled, they could not completely comprehend the history of the Colorado River. Even today we still don't have a complete picture of how this landscape evolved. 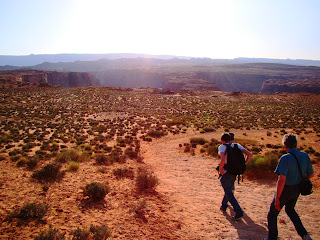 What we do know is astounding. For nearly a billion years, the earth's crust in this region has been near sea level and stable, but in the last few million years, that same crust was uplifted en masse some 2 vertical miles. Ancient rivers were rejuvenated, and new rivers formed as headward erosion tore away at the edges of the plateau. The entire river system that may have existed for tens of millions of years had been upended, and some rivers, the Colorado in particular, ended up flowing in a totally opposite direction of the original watercourse. The old meandering rivers were trapped in their channels as the land rose, so they cut straight down, maintaining the original river loops in what are called entrenched meanders. 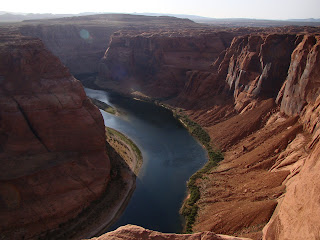 We were in the vicinity of Lee's Ferry during our reconnaissance journey last week. I was looking for interesting stops to add to our AAPG field seminar in July (a trip you are welcome to consider joining!). A volunteer at the Navajo Bridge Visitor Center pointed out that I might want to check out Horseshoe Bend outside of Page, Arizona. I have to admit I have never really explored Page all that much. I never got a chance to see the original Glen Canyon, and neither did anyone else except the few hundred people who had rafted the river through the canyon by the time that Glen Canyon Dam shut the floodgates in 1963. It was apparently one of the most beautiful river canyons in the world, but it now lies beneath hundreds of feet of stagnant water and silt. Page was the town where the dam workers lived during construction, and to me it represented everything that was wrong with the choices we've made in land and resource use (the giant coal burning power plant on the outskirts of town doesn't help). And with the ongoing decade-long drought, the dam and reservoir are in danger of becoming totally useless as far as their intended use as water storage and power generation.

I walked the sandy three-quarter mile trail in the hot late afternoon sun, and reached the edge of the precipice. At this point, the Colorado River is flowing through a thousand foot deep gorge cut into the thick Navajo Sandstone. It is just a few miles downstream of Glen Canyon Dam, and a few miles upstream of the Echo Cliffs and Lee's Ferry where the river briefly flows along a stretch without cliffs. It almost immediately plunges into Marble Canyon, and the Grand Canyon. Taken in pieces, like the shot above, and the one below, the canyon is scenic, colorful, and spectacular. It is always stunning to stand on (or lie on, for the acrophobics) a thousand foot vertical cliff. But taken as a whole, Horseshoe Bend is special... 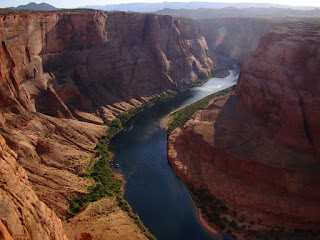 From the viewpoint at the end of trail, we are standing at the outer edge of one of the entrenched meanders, so we have the spectacle of the river running in a nearly complete circle. It's hard to photograph without a wide-angle lens, but it is an incredible sight. 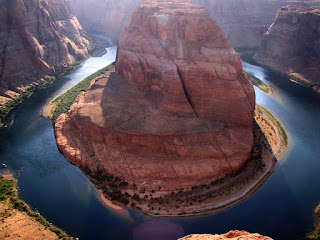 I was there at one of the harder moments to take pictures, though. The late afternoon sun was directly ahead of me, and it had been a dusty day, so all my pictures have lens flares galore. I can certainly imagine a serious photographer spending an entire day at this one spot, catching all the moods and sun angles. 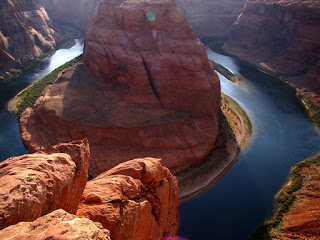 Horseshoe Bend is accessed along Highway 89 just a few miles south of Page, Arizona. There is a parking lot on the west side of the highway. The hike is just 1.5 miles round-trip, but it is almost all in loose sand. Take water!
Posted by Garry Hayes at 10:35 AM

Garry, you mention, "It's hard to photograph without a wide-angle lens." That's true of a lot of geological sites!

The answer is to take a series of pictures, and use software to stitch them together. You can use Photoshop, or buy cheaper single purpose software made just for making panoramas.

You'll get the best results using a tripod, but that isn't necessary. You can also get good results with a handheld camera.