Candyland, Narrows, Rockfalls and Vertical Rocks: What does any of this have to do with Grand Canyon? 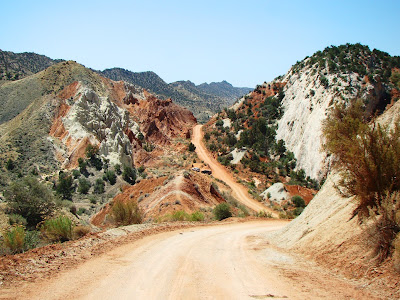 A gravel road in Utah runs 41 miles from Kodachrome Basin State Park to Highway 89 near the village of Big Water. Why take the trouble to follow it when there are nice paved highways to get to Zion and Bryce and the other national parks in the region? If you are interested in geology, there are lots of reasons: an intimate look at the feature that forms the structural boundary of eastern Grand Canyon, for one, and an inordinate amount of spectacular scenery, including a latter-day version of Jurassic Park in full color, and some delightful hikes through narrows and slot canyons. It's one of the few roads that bisects Grand Staircase-Escalante National Monument, the biggest park in the region, even larger than Grand Canyon National Park. And for the engineers, a couple of very cool rockfalls, one very recent. I found it fascinating enough that I'm intending to take my geology tour through the region in July, assuming the road isn't closed by flash flooding (here is the info, if you are interested in attending).

Cottonwood Wash Road follows the trace of the Cockscomb, the northern end of the East Kaibab monocline, the structure that defines the eastern side of the Grand Canyon. A monocline is a type of fold in which one side of a fault at depth has risen, slicing through the rocks below, but not breaking through the overlying sedimentary layers, rather like a rug draped over a stairstep. At Grand Canyon, the East Kaibab monocline has formed the Kaibab Plateau, which the Colorado River had to slice through to form the deep gorge we see today at the national park. Along the Cockscomb, there is no Grand Canyon, but erosion has exposed the heart of the monocline and the Jurassic-Cretaceous sediments that it displaced.

For much of its length, the road follows a strike valley along the monocline, where erosion has selectively removed the softer clay-rich rocks like the Tropic shale or parts of the Carmel formation. In addition to being easily eroded, the shales are readily deformed and stretched, and along one particular stretch of the road called the Squeeze, the rocks are mostly vertical and highly contorted. The area, about 20 miles in from the north, or 25 miles from the south, is locally called "Candyland" for the bright colors, especially red and white. A unique rock formation next to the road is named "Santa Claus" (below). 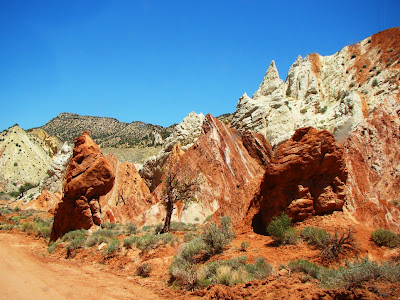 The Navajo sandstone and other sandy layers are exposed along the road, forming bold cliffs, and when watercourses cut through, deep slot canyons and narrows. A most delightful stroll can be had along the 1.5 mile long Cottonwood Wash Narrows. The trail is a primarily a sandy wash and is easily hiked with only a few areas of scrambling around rockfalls (more on that in a bit).

At the north end of the narrows, you actually have a choice, to go upstream a few hundred yards in the narrowest canyon (above), or to walk downstream 1.5 miles through the deepest part of the narrows (below). I'm always a good sport about these kinds of things. I'd do both! 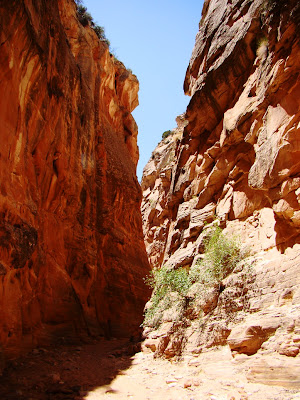 I was in a big rush during my reconnaisance trip last week, but I walked the lower end of the Narrows, and quickly explored the upper end as well. I was there at high noon, so there was no experimenting with the glow of reflected sunlight in the deepest parts, but I found the scenery to be spectacular nonetheless. 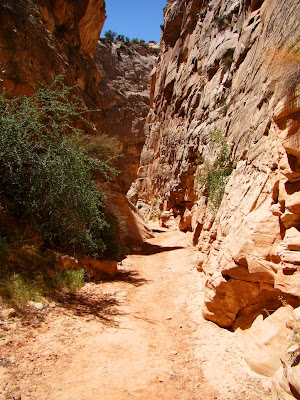 At the lower end, the rocks look...kind of wrong. The towers of Navajo sandstone lack their normal "beehive" appearance, and instead look kind of spiky (upper center in the picture below). At this point they have been stretched and deformed, and somewhat broken up by the folding process. I wondered if slope stability was a problem where rocks have been messed up in this fashion (more on that in a second). 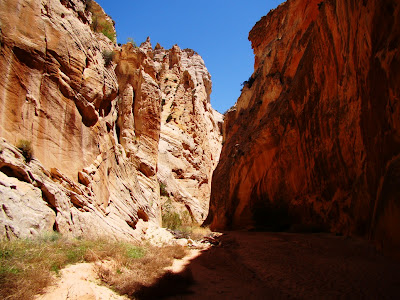 If you don't have anyone to shuttle you, it is a simple 20 minute stroll along the road through Candyland back to the beginning of the Narrows. All in all it is a nice introduction to structure and erosional processes of the Colorado Plateau in a compact area. 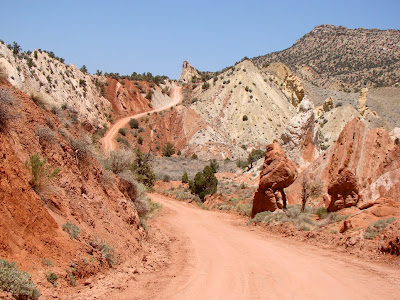 About that slope stability business...at the lower end of the Narrows, the path is blocked by a rather large rockfall deposit (below). The fall filled the canyon floor, so the hiker has to pick one's way across a trail of use on the north (left) side. It's not too difficult, but it is a reminder of what happens when nature produces vertical cliffs. They don't last all that long in the big scheme of things. The amount of vegetation growing on this slide suggests it has been here for a few years. 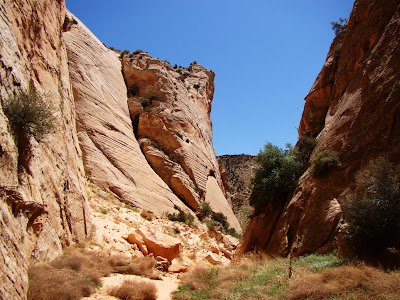 That's not true of the other slide I saw. The most recent edition of Kelsey's hiking guide for the Paria Canyon region (2010) mentions a side canyon at the upper end of the Narrows that is easily explored. Not anymore...look below to see how it looked last week. No vegetation on it at all except a little patch of grass at the base. I can't find any information about the rockfall and would appreciate some additional info if anyone out there knows about when it happened. 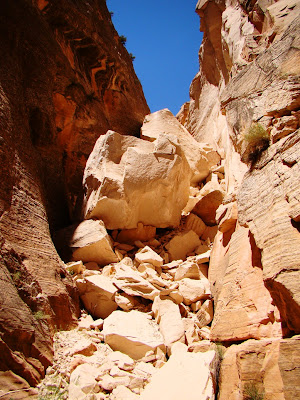 Want to learn more? Come on our trip! Or, check out these resources:

A detailed road guide to the geology of the Cottonwood Wash road: http://www.utahgeology.org/road_logs/uga-29_first_edition/NM_guide/gsenmlog.pdf

Thanks for the links and tour. I've traveled by the Cockscomb north of House Rock Valley. Amazing place.