It was a day like no other...and that's the problem 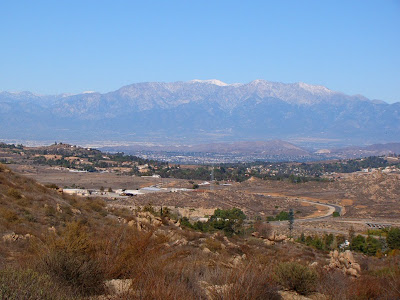 A thousand real estate agents abandoned the shopping malls, grabbed their cameras, and snapped pictures today in southern California. Why? Because it was a gorgeous clear day like no other...and that's the problem. If you sell property in SoCal, your pictures of houses for sale have big beautiful mountains in the background. Mountains that are commonly invisible when you actually live there. Given the all-too-common state of the air in the basin, this could be called false advertising.

In the first years of my youth, I lived in the Inland Empire, the citrus-growing region around Riverside, Upland and San Bernardino. There were smog problems back then, but most people accepted that as a fact of life, the cost of living in big cities. The ring of mountains surrounding our valley guaranteed that the poisoned air could not escape and be dispersed across the desert. In those days of the 1960's, no one could conceive that anything could be done about air pollution, much less that it should be. I grew up next to a steel refinery which, their media officials proudly pronounced, produced only 15% of all the smog in southern California. But dammit, they employed thousands, and even offered medical benefits (ever wonder where Kaiser Permanante came from?). Air pollution was the symbol of a booming economy, even if it was sickening and killing the people who had to live in it.

I have memories of the vast wall of yellow gunk streaming over the Chino Hills most afternoons, and after a time a smog alert would be issued and p.e. class would be canceled that day. It would physically hurt to take a deep breath. That was just the way things were, and there wasn't anything that could be done about it. There is still plenty of pollution, but for the actions we chose to take the Los Angeles basin and the Inland Empire would have ended up looking like the L.A. of the movie "Blade Runner".

The Clean Air Act made a difference. Even though the population has perhaps quadrupled since I lived there, pollution systems in cars and factories have improved air quality to a huge degree. It would never have happened without government intervention, and we are all the better for it. I think of the Clean Air Act and other landmark legislation that made life better for all of our population, not just a chosen few. Politics has always been about getting the advantage for those stand to make the most money, but once in a while we can force politicians to rise above their base instincts and really do something for the good of the country. 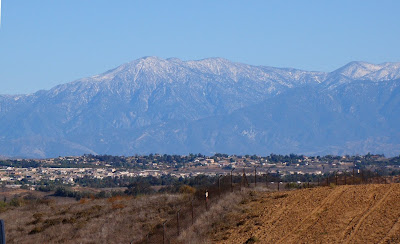 The ranges in these pictures are the mountains of my youth. I have stood on many of these summits, and explored many of the canyons hidden in the folds of the jagged rock. The first picture shows the rugged eastern end of the San Gabriel Mountains, the high ridges of Cucamonga Peak, Ontario Peak and Mt. San Antonio, ranging from 8,000 to 10,000 feet in elevation. They are composed of plutonic and metamorphic rocks ranging in age from Proterozoic to Mesozoic time. The mountains have risen rapidly in the last few million years, and have been described to me as statistically the steepest mountains on the planet. Indeed, the only places flat enough for developments in these mountains are on landslide deposits (Baldy Village and Crystal Lake, for instance). The town of Wrightwood, besides being sited on top of the San Andreas fault is also occasionally damaged by mudflows from the unstable slopes above.

The high ridges in the second picture are in the San Bernardino Mountains, the highest mountains in southern California. They are also composed of plutonic rocks, but also include Paleozoic metasedimentary rocks with affinities to those in the Mojave Desert. They are quite unlike the adjacent San Gabriel Mountains, which is hardly a surprise given that the San Andreas fault passes between them. The rocks of the San Gabriels originated far to the south, and have been carried north by lateral motion along the fault. The high ridges of San Bernardino Peak made an ideal location for the initial survey station for the township and range system of property boundaries across southern California. The primary east-west survey line is called a "baseline", and if you stand in the middle of Baseline Avenue as it runs through Claremont and Upland, you will see that it lines up exactly with San Bernardino Peak in the distance (you need a clear day, and watch out for traffic!).

I am trying trying to build a photographic record of some of the places I grew up in as part of my "Other California" series, so look for a few entries as I revisit the mountains of my youth. In the meantime, I recommend a wonderful book published by Stephens Press called "Call of the Mountains" by Ann and Farley Olander. It's a wonderful photo essay of the San Gabriels, the San Bernardinos, and the San Jacinto Mountains, the not-quite-fully appreciated jewels of the mountains of Southern California.
Posted by Garry Hayes at 8:43 PM

What a great post. I, too, remember the painful efforts to take a deep breath. Starting with the citrus smudging and evolving to "unhealthful air" alerts. Remember walking home from school on super-smoggy days? Yuck! Bill and I marvel often about the amazing clarity of many of our days. We likewise thought that the smog was just something unchangeable that we had to live with. Then I got to the end of your post and discovered your recommendation of our book, Call of the Mountains. Wow, thanks! Here's the link if anyone is interested (and it is on Amazon, too). www.callofthemountains.com.

Call of the Mountains was one of my favorite books to design. I loved seeing pictures of place I have gone in my youth too. The air quality is indeed better than it was in the 70s. In fact the smog was the primary reason I left CA for life in Colorado. We have similar problems here, but weather patterns that make it less noticeable most of the year. And, as a result pollutants are dispersed and the local air quality is pretty good. It still not good for the whole world, but at least we breathe easier and can see our mountains everyday. I look forward to seeing the other California posts!

I remember the LA basin in the
1950s, the air was so bad my eyes burned and my lungs burned. We would visit family in the San Fernando Valley and I can recall asking my mother "if this is a valley where are the mountains?" You couldn't see from one side of the valley to the other. It is much better now. But, when I was a child you could see the Sierra from 99, now that is rarely the case.

. When we moved to Alta Loma in Oct., 1968, the smog made it so hard to breath that I thought we'd entered the underworld. Yet whenever it cleared, & we gradually realized the beauty out our front door, we wanted to do what we could to protect them - hence Call of the Mountains. Thanks for plugging it at the end of heartwarming piece.