Election Postscript: There is Power (and Hope) in Education, Too... 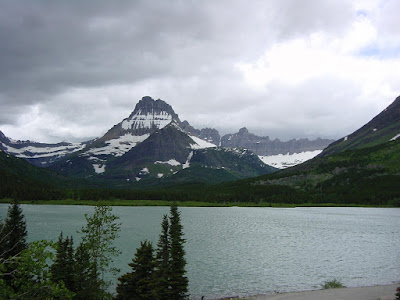 Glacier National Park will be glacier-free, possibly by 2020. There were 150 in 1850. Today there are 25...
The elections are over, a different party controls a chamber of Congress, and climate legislation based on accurate science is becoming an ever more dim possibility. When the majority party brags about their scientific ignorance, and dismisses global warming, I see little hope for rational and effective legislation.

I am not a climate scientist, and am not interested in arguing the fine points of skepticism about global warming, but I will trust the peer-reviewed research of thousands of climate scientists long before I trust politicians whose pockets are lined with cash from energy and mining companies (not to mention the people shouting on radio and cable television). There are disagreements in climate science just as there are disagreements in any scientific discipline. That's the way it is supposed to work. But there is also a method and place for resolving those disagreements: the peer-reviewed journals and scientific conferences. If there are actual findings that support the deniers and skeptics, let them publish it and argue with those who can analyze and interpret their data.

I've talked about the manufactured doubt industry in the past. The effects of global warming are with us now and are unmistakable. We need to plan for the future, not deny that it will happen. There is political power, but there is power in education too. Learn about the issue.

I offer an editorial from the journal Climate Change by Richard C. J. Somerville as a starting point (via Climate Progress and Hot Topic) :

1. The essential findings of mainstream climate change science are firm. The world is warming. There are many kinds of evidence: air temperatures, ocean temperatures, melting ice, rising sea levels, and much more. Human activities are the main cause. The warming is not natural. It is not due to the sun, for example. We know this because we can measure the effect of man-made carbon dioxide and it is much stronger than that of changes in the sun, which we also measure.

2. The greenhouse effect is well understood. It is as real as gravity. The foundations of the science are more than 150 years old. Carbon dioxide in the atmosphere traps heat. We know carbon dioxide is increasing because we measure it. We know the increase is due to human activities like burning fossil fuels because we can analyze the chemical evidence for that.

3. Our climate predictions are coming true. Many observed climate changes, like rising sea level, are occurring at the high end of the predicted range. Some observed changes, like melting sea ice, are happening faster than the anticipated worst case. Unless mankind takes strong steps to halt and reverse the rapid global increase of fossil fuel use and the other activities that cause climate change, and does so in a very few years, severe climate change is inevitable. Urgent action is needed if global warming is to be limited to moderate levels.

4. The standard skeptical arguments have been refuted many times over. The refutations are on many web sites and in many books. For example, the mechanisms causing natural climate change like ice ages are irrelevant to the current warming. We know why ice ages come and go. That is due to changes in the Earth’s orbit around the sun, changes that take thousands of years. The warming that is occurring now, over just a few decades, cannot possibly be caused by such slow acting processes. But it can be caused by man-made changes in the greenhouse effect.

5. Science has its own high standards. It does not work by unqualified people making claims on television or the Internet. It works by expert scientists doing research and publishing it in carefully reviewed research journals. Other scientists examine the research and repeat it and extend it. Valid results are confirmed, and wrong ones are exposed and abandoned. Science is self-correcting. People who are not experts, who are not trained and experienced in this field, who do not do research and publish it following standard scientific practice, are not doing science. When they claim that they are the real experts, they are just plain wrong.

6. The leading scientific organizations of the world, like national academies of science and professional scientific societies, have carefully examined the results of climate science and endorsed these results. It is silly to imagine that thousands of climate scientists worldwide are engaged in a massive conspiracy to fool everybody. It is also silly to think that a few minor errors in the extensive IPCC reports can invalidate the reports. The first thing that the world needs to do to confront the challenge of climate change wisely is to learn about what science has discovered and accept it. The IPCC Fourth Assessment Report at www.ipcc.ch is a good place to start.

We have to start (again) somewhere...my own state showed vision in voting down Proposition 23, which would have rolled back the provisions of Assembly Bill 32 which makes California a leader in the effort to curb carbon dioxide emissions. The proposition was defeated 61% to 39%. Education does work!

You might like to see the UK Geological Society's statement on climate change, you'll find it at geolsoc.org.uk

(I don't know if you want direct linking)