Are You Sure That Enclosure Will Be Enough? New Dinosaur at MJC's Great Valley Museum! 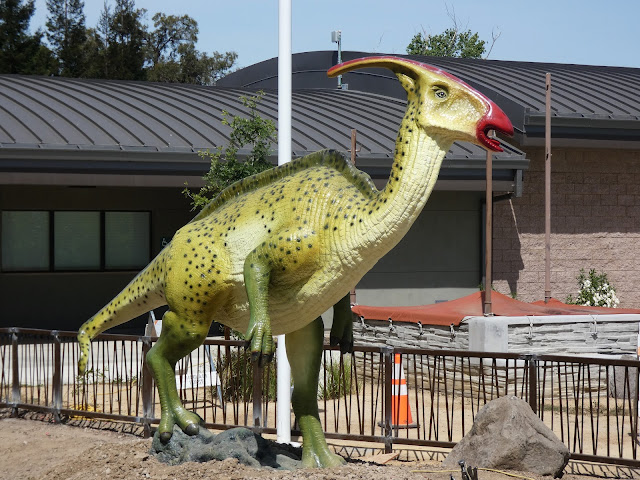 I couldn't help but recall a certain famous movie opening: guys in hardhats unloading a dinosaur at a new park named after a geological time period...Cretaceous Park or something like that. Things went scarily wrong, and movie history was made. 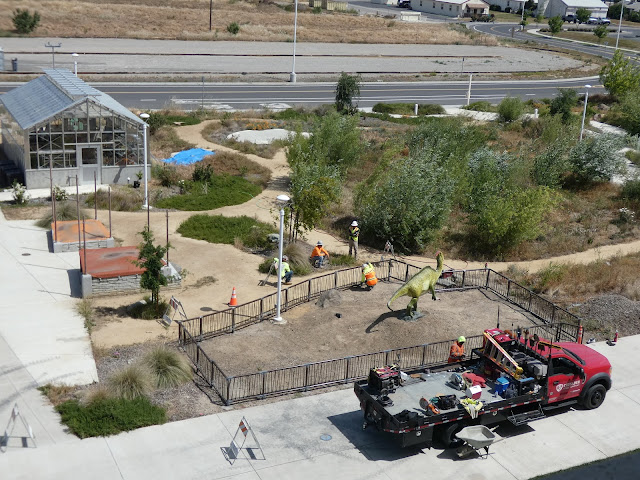 Today's experience didn't end badly though, since the dinosaur in question was a plant-eating Parasaurolophus and it wasn't a living specimen. It was one of the final additions to the Great Valley Outdoor Nature Lab at the Great Valley Museum on the campus of Modesto Junior College.

The exhibit commemorates a little-known fact about our county: it was the site of the first reported discovery of dinosaurs in California. Back in 1936 17-year-old Al Bennison was exploring Del Puerto Canyon in the Coast Ranges along the western part of Stanislaus County looking for shell fossils when he found bones scattered on a slope. He showed them to his science teacher who reported them to the paleontologists at U.C. Berkeley. It proved to be the partial remains of a Saurolophus, which was one of the last dinosaurs that ever lived on our planet, one the last groups in existence when the gigantic asteroid hit the planet (or when the volcanoes blew, or whatever else did them in). They lived in the latest part of the Cretaceous Period, which is well represented by sedimentary rocks in our region. The rocks are marine in origin, which tend not to be good places to search for dinosaurs, but sometimes a carcass would float out to sea, as this one did. 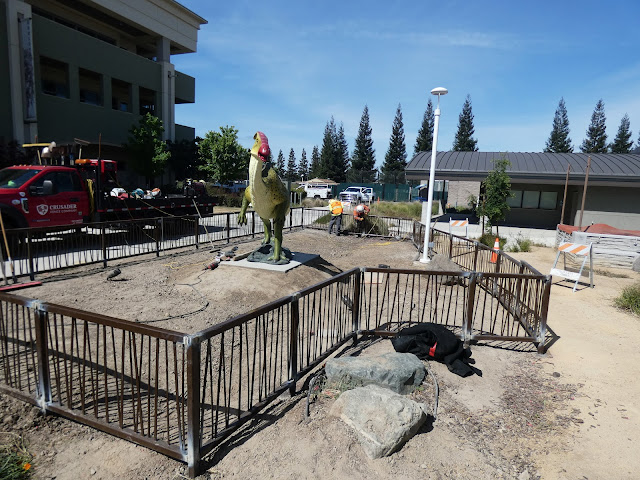 The creatures were gigantic, on the order of thirty to forty feet long, weighing several tons (our model is a 1/2-sized replica at 16 feet long). They were plant-eaters, with teeth well-adapted to grinding twigs and leaves. Whether they swam or not has been a topic of discussion and debate. Some argue that they had few other defenses from predators, so that swimming was necessary to escape from being eaten. Others suggest that they lived in herds that provided protection. California designated a species of Saurolophus, Augustynolophus morrisi, as the state dinosaur in 2017.
We thought it was important to put a dinosaur on display as we planned for the new Great Valley Outdoor Nature Lab. Dinosaurs certainly capture the imagination of our children (and not a few of our adults), and it is a good thing for our students to know that our county played an important part in the paleontological discoveries in our state. When students realize that one of their own (however long ago) made an important find, they also can visualize themselves as a paleontologist or geologist making important contributions to science. The concrete squares covered by orange tarps are mock paleontological digs where students can experience the sense of discovery that all paleontologists live for. 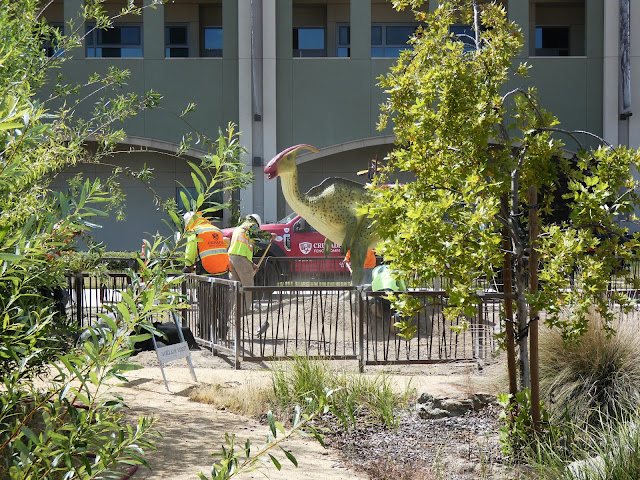 So why a Parasaurolophus, and not the Augustynolophus morrisi or other 'real' Saurolophus? That's easy: none of the marketers of dinosaur replicas offer any for sale, at least far as I could find. We figured that a similar species was better than none at all...
What a great day for geological education in our county. I just hope the containment structure works! It just won't do to have wild dinosaurs running around on our campus...
Posted by Garry Hayes at 11:49 PM

This is so AWESOME! What a truly inspiring addition to the already incredible Great Valley Museum and MJC's wonderful campus resources to help drive the vision of higher education for ANYONE & everyone ☺️😍