The Other California: Catch it While You Can, the Devil's Slide 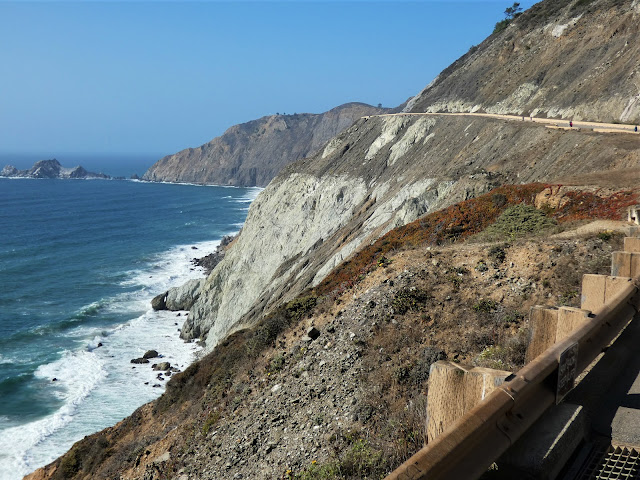 California is nothing if not audacious. Our state possesses so many incredible landscapes known throughout the world: alpine mountain ranges, volcanoes, deserts, and of course the legendary California coastline. The coastline in particular has garnered a lot of attention over the years to the extent that roadbuilders tried to provide vehicular access to practically all of it. There are only a few short stretches of coast, especially in the north state, where wilderness reigns instead of highways. Highway 1 is a spectacular engineering feat for better or worse, providing some of the most astounding views a driver could ever hope to see.

But this incredible feat of engineering didn't come without serious costs and continuing hazards. Hardly a year goes by in which some portion of Highway 1 isn't shut down by mudflows and landslides. The Big Sur section of the coast has been especially hard hit in recent years. But there is one part of the highway that we Californians constantly heard about in the news, but not any longer. It just sort of disappeared from the public consciousness. It's a section between Pacifica and Half Moon Bay called the Devil's Slide. 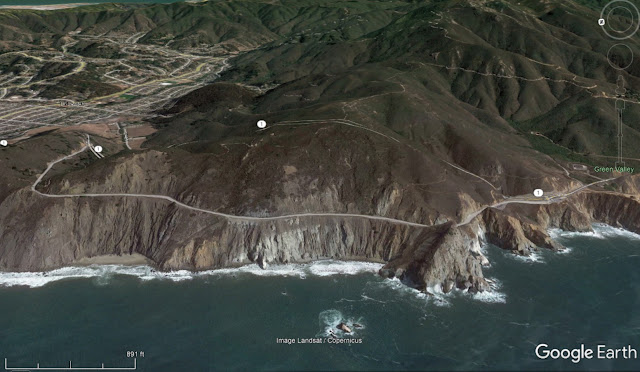 One needs only to look at the Google Earth image (above) to see the insanity of trying to build and maintain a road across the coastal cliffs here. The near total lack of vegetation is an immediate clue to the instability. A closer look at the geology of the rocks exposed in the cliff reveals a complex mess. To the right is the bold cliff labeled on the map below as Devil's Slide, although that particular rock is not the source of the problem. It's a relatively coherent intrusive complex called the Granitic Rock of Montara Mountain. The unit consists of granite and quartz diorite, which to most humans looks like granite. It formed about 86 to 93 million years ago as part of the Sierra Nevada batholith. Being found along the coast, it seems a bit out of place, and it truly is. It was sliced off the south end of the Sierra Nevada by the San Andreas fault system and transported several hundred miles north at the furious rate of about 2 inches per year.

The problem child of this geologic mess is the gray colored unit labeled Tss on the geologic map below. It is an unnamed sequence of sandstone, shale, and conglomerate of Paleocene age, from around 55-60 million years ago, just after the great extinction that wiped out the non-avian dinosaurs and many other species. These weakly consolidated sedimentary rocks have been severely deformed and sheared by nearby fault zones into a jumbled mass of unstable blocks prone to sliding. The main slide surface is about 150 feet beneath the surface, and the entire unstable block is 4,000 feet long, and as much as 900 feet high. 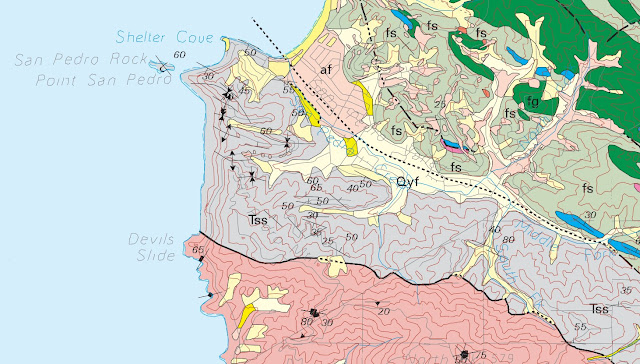 It was a treacherous slope, but engineers (well-educated or not) love a challenge. The first attempt at building a road came in the late 1800s when a road was carved about 100 feet above the present trail. Landslides and slope failures soon commenced, and by 1914 the road was abandoned in favor of a winding route on the other side of San Pedro Mountain (which serves today as a fire lane).
Then the railroad designers took their turn, putting in a railway on the lower part of the cliff in the early 1900s. The slopes disagreed with the railway, and the tracks were abandoned by 1920 (the 1906 earthquake did not help). Then in 1936, the roadbuilders were ready to try again. Highway 1 was being constructed along much of the Central Coast of California, and the engineers decided they simply must have a highway across the Devil's Slide. It was finished in 1937. 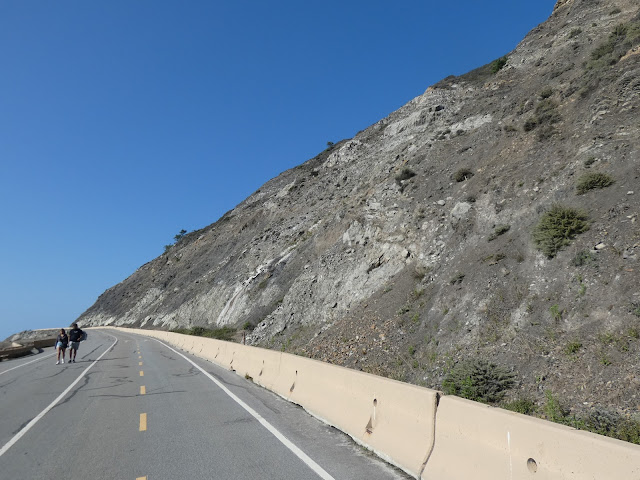 The problems of course began right away. Slope failures caused major closures of the highway, in some instances for days, in others weeks, and in 1995, five months. Numerous fixes were proposed, but most would have caused severe environmental disruptions in the marine ecosystem below, and unwanted urban growth above (an improved and widened freeway would have brought commuters to Half Moon Bay). So the status quo continued (fix the breaks and keep the damaged road open as much as possible). Driving the highway was an exhilarating and bumpy experience, and for geologists it was a frustrating adventure because there was no safe place to stop and study the geology of this fascinating case study in slope failure.
Another solution gained steam in the early 2000s: a tunnel bypass. What was proposed were two single lane tunnels underneath San Pedro Mountain. At 4,000 feet each, they would be among the longest of tunnels in California, and would end up costing 'only' a third of a billion dollars. The Tom Lantos Tunnels were completed in 2013, and the transportation saga of traversing the Devil's Slide appeared to be over. 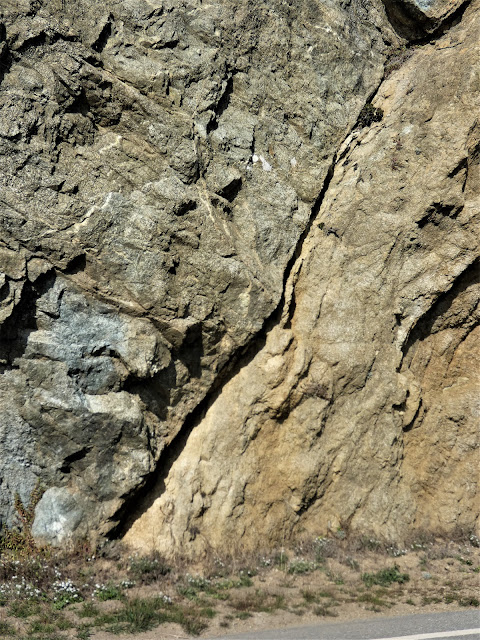 So what to do with the old highway? It could have simply been abandoned like the nearby WWII defense installations, but a better idea emerged: convert the old highway into a hiking trail. San Mateo County took over the property and converted the highway into a 1.3 mile long hiking and biking trail, complete with parking at both ends, restrooms, and a series of useful interpretive signs. It opened in 2014, but I didn't get a chance to explore it until last week. 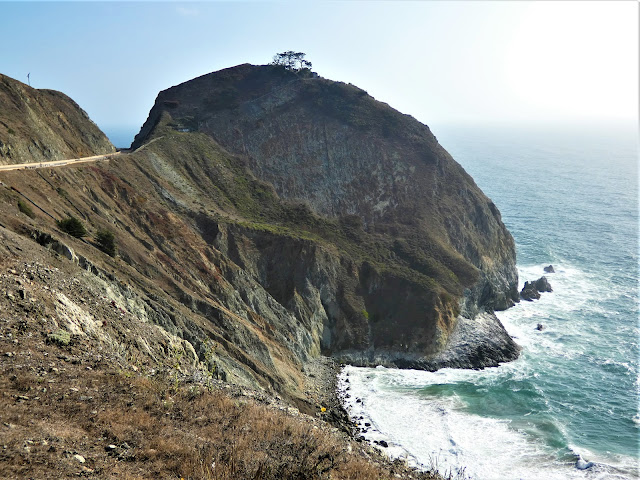 The paved trail was in excellent condition. Maybe the lack of heavy truck traffic eases some of the pressure on the slope. There are great exposures of the rocks on the mountain side, and glorious ocean views on the cliff side. More than 150 bird species have been observed along the trail since its opening in 2014, but there is the potential for many more as birders have access that wasn't possible prior to the construction of the tunnels. 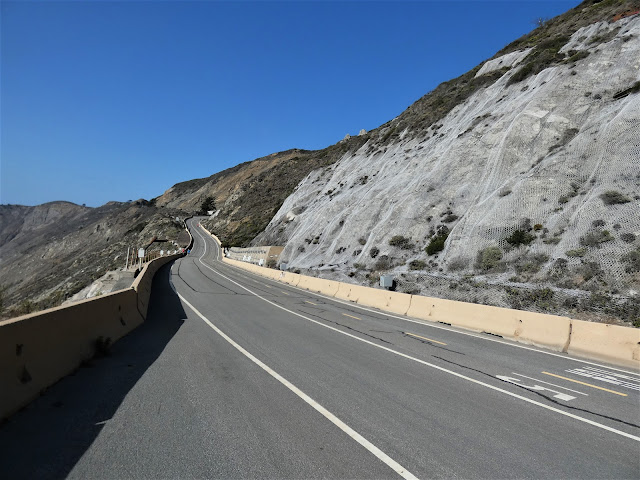 The trail also offers some close-up examples of slope mitigation methods as well. A section of the cliff has been covered in a metal mesh to prevent boulders from injuring people.
One might argue that this locality is not in the spirit of "The Other California", since it has been a famous section of Highway 1 for many decades, but it's only been the last few years that anyone could actually walk and study this fascinating spot, and only a relative few people know about the trail. If you visit the Bay Area it is well worth a visit.
But you might consider doing it soon! There is less stress on the slope from heavy traffic, but the fundamentals of the slide are still in place, and it can't be predicted when new damage might occur... 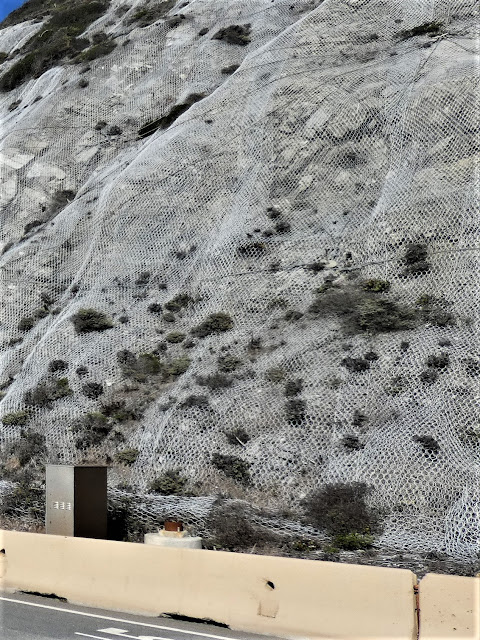 For the park brochure and trail map of the Devil's Slide Trail, use this link:

For a geology road trip along the coast south of San Francisco check out this link:

For engineering details on the slide, check out the following USGS Bulletin:

For a geologic map that covers the slide area, check out: