Here's a Pretty Puzzle...What are These Trees Doing Here? An Evening at Calaveras Big Trees 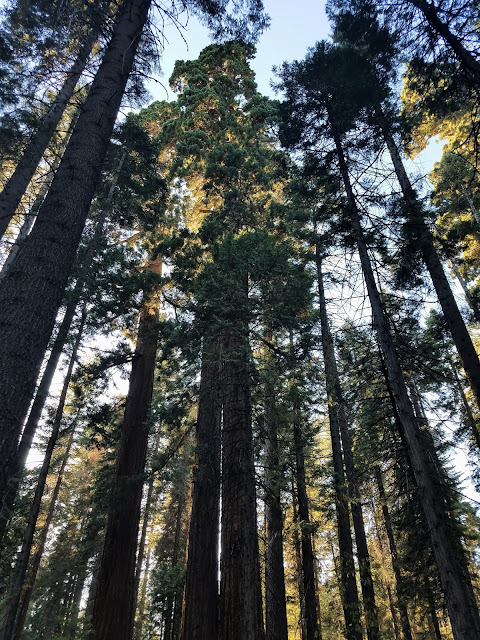 When the trees were discovered by people of European descent in the 1850s, few believed the stories of their immense size. There were of legends and tall tales emerging from the explorations of the American West, but trees that towered 300 feet high with diameters of 35 feet just seemed beyond the pale. Eventually promoters stripped the bark off one of the really big ones, took the pieces to an exhibition back east and reconstructed the tree. Many still considered it a hoax anyway. 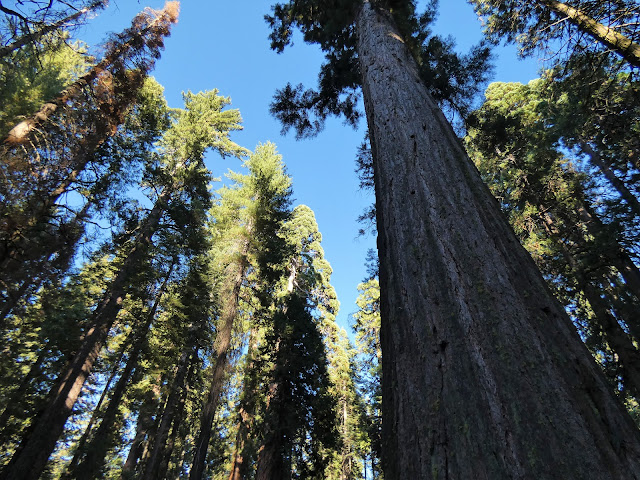 The poor tree that was stripped still stands today, a dead snag in the Sequoia Grove at Calaveras Big Trees State Park in the northern Sierra Nevada along Highway 4. I didn't get images of that tree, but there were plenty of other living ones to enjoy. We were there the other day on a lark. We had a couple of hours to see the sinking sun and lengthening shadows in the forest before a late dinner in Angels Camp. 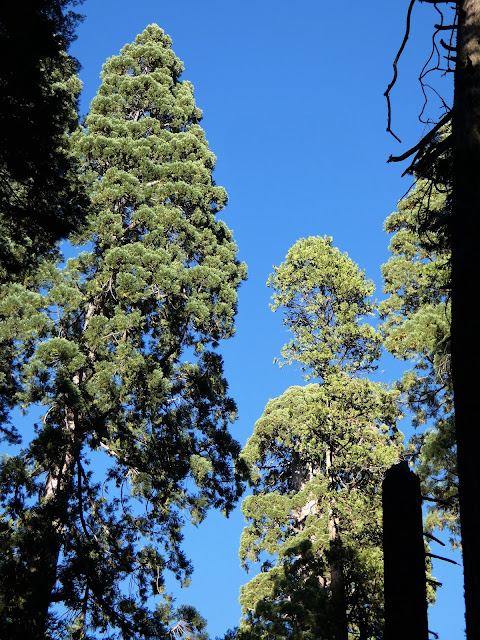 The Sequoia Trees (Sequoiadendron gigantea) are an enigma. They exist today only in a series of 65 individual groves scattered across mainly the southern Sierra Nevada. They are relatives of the Coast Redwoods, and the Dawn Redwood of China, a tree that existed in a single grove which was only scientifically described in the 1940s. Yet the trees have existed since the age of the dinosaurs and were once distributed widely across the northern hemisphere. Their Sierra home is their last refuge. About half the original Sequoia trees were cut down prior to receiving protection, but because the wood was brittle and tended to shatter, they only found use as grape stakes and the like. Nearly all the remaining trees are protected, either in Sequoia/Kings Canyon National Park, Yosemite National Park, or Giant Sequoia National Monument. 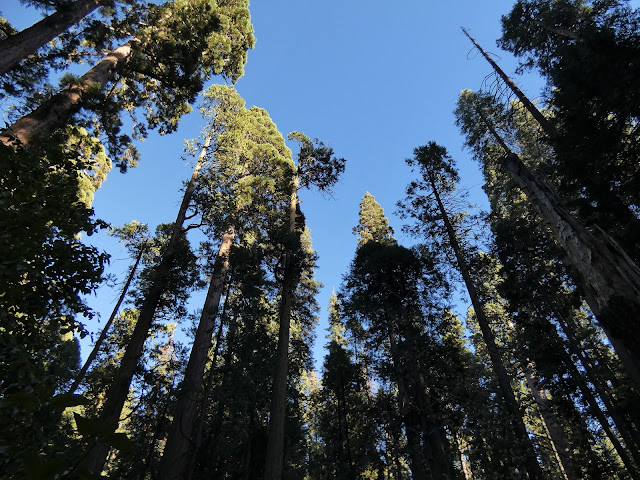 Aside from human attack, they are not easily killed. Their bark is thick and lacks easily burnable sap so most wildfires don't hurt them (high burning "crown" fires are an important exception). The bark is thick, keeping them safe from insect attack. The trees are thought capable of living more than 3,000 years. Their greatest liability is a shallow root system that lacks a large taproot, so they can topple on uneven slopes or during intense windstorms. 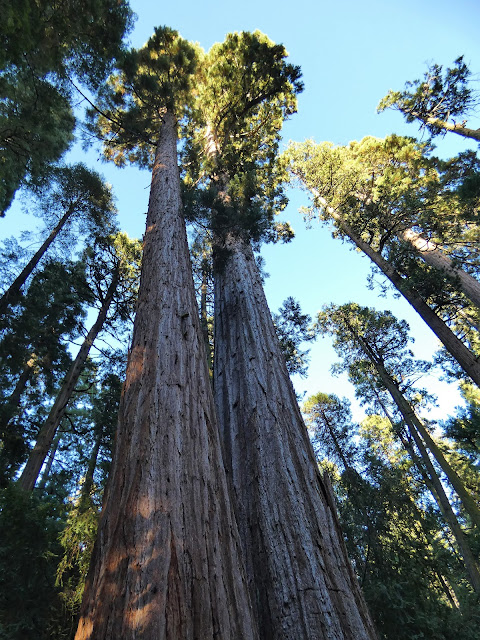 The cool mystery about these trees is the one of their biogeography. How did they get to where they are today, and how did they survive when most of their closest relatives did not? Calaveras Big Trees is an even greater mystery, along with a small grove in Placer County consisting of a mere six mature trees. Looking at the map below, one can see their isolation from the others of their species, more than fifty miles of deep gorges and canyons. 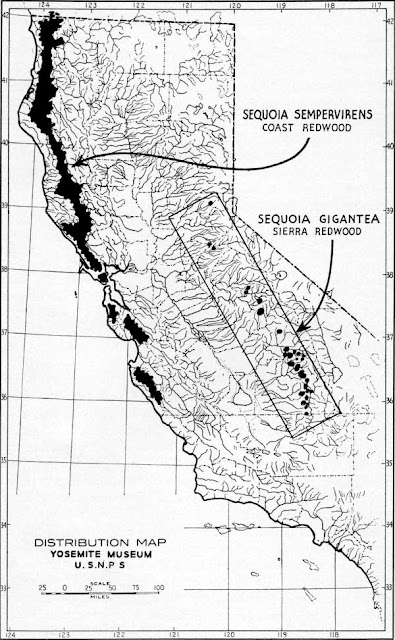 At least one part of the explanation is clear. They migrated over the Sierra Nevada crest. Every time I say that I envision the gigantic trees walking like some of Tolkien's Ents, but it is better to see them as propagating along pathways where seeds could thrive and grow. This would be impossible with the present day Sierra, given the crest topping out at elevations over 10,000 feet. But the Sierra Nevada is a young mountain range, and it's probably only been a few million years since the range rose and tilted to the west (opinions on this scenario, it should be noted, vary). The trees that once thrived across Nevada had an uninterrupted slope towards the west. As the mountains continued to rise, they cut off the precipitation into Nevada's Basin and Range Province, turning the region into the semi-arid and desert environment that it is today. 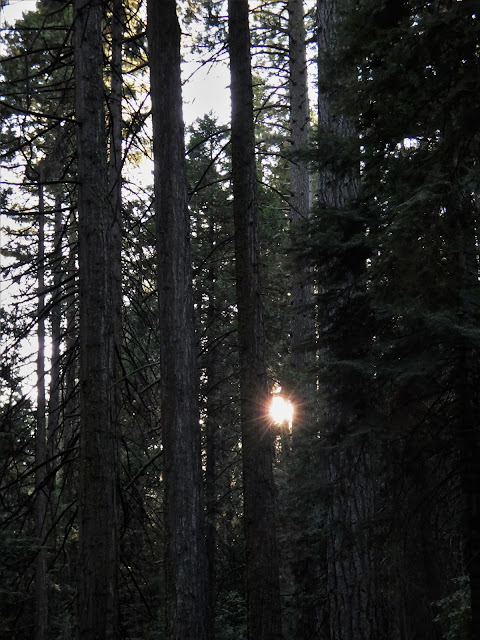 Perhaps the main factor in the decline of the Sequoia trees across the hemisphere was the Pleistocene Ice Ages. A dozen times or more the ice advanced and receded across the northern parts of the continents and in the high mountains. The habitat for the trees was simply erased across much of the former range and the trees couldn't propagate quickly enough to escape the ice. In the Sierra Nevada, however, the unique geography, the westward tilted block of rock, probably saved the trees. When conditions grew colder, the seeds could propagate in soils lower on the westward slopes, and when the ice receded, they could propagate uphill. 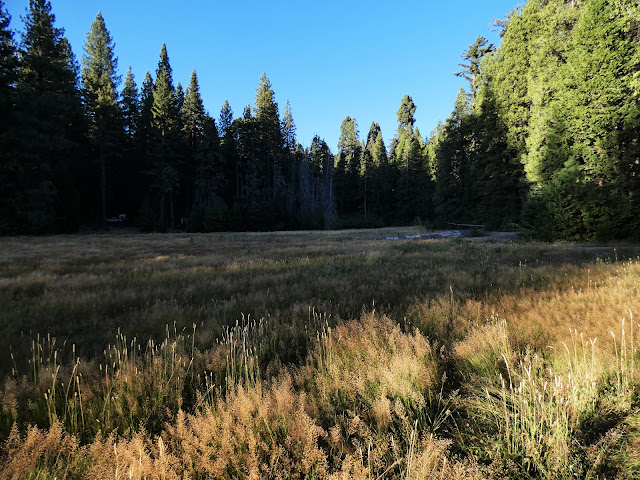 Still, one has to wonder what the Calaveras grove is doing here, fifty miles north of their relatives in Yosemite National Park (who are in turn fifty miles north of the bulk of the Sequoia groves). And those six mature trees in Placer County? How have they survived? For the record, there were historically eight trees, but two fell in 1862. It's a pleasant mystery to contemplate as one wanders through the two beautiful groves at Calaveras. 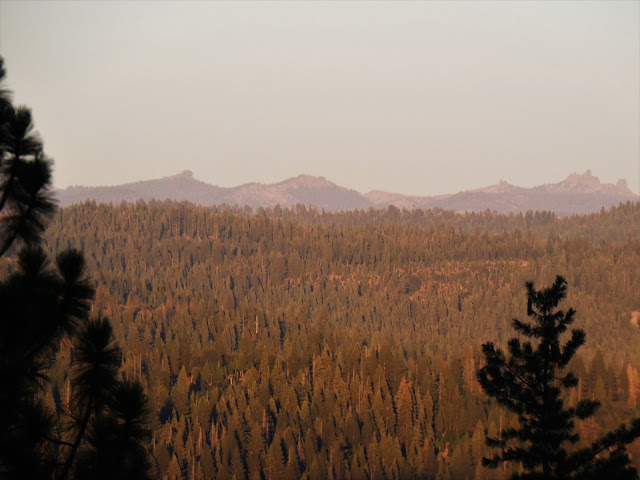