Liveblogging the Deluge: Is the Big-Boned Lady Singing? The Aftermath of the 2017 Flood on the Tuolumne River


Goodness sakes, are we still talking about that flood? Well, yes we are. It isn't quite done, although events this week are signaling the end, at least in some respects. In another respect, the five-year drought that we thought the floods put an end to is still with us.

I've had the privilege of seeing two great floods in my time living along the Tuolumne River where it flows into California's Great Valley. The first was the incredible flood of 1997 when the river overwhelmed Don Pedro Reservoir and rampaged through my town at around 70,000 cubic feet per second. The second was this year. The river never topped 15,000 cubic feet per second, but the flood continued for kind of a long time...it lasted for more than six months! The watermaster at Don Pedro Reservoir upstream had to do a delicate dance of balancing the inflow of storm water and snowmelt with a lake that was at more than 95% of capacity. The snow this year was around 200% of normal, and even today, on the first day of August, the inflow is still a respectable 4,000 cubic feet per second. Normal would be a few hundred cfs. I am reasonably sure that I'll never see an event like this again in my life.
These six months have been a stark example of geology in action. There have been real changes in the channel of the Tuolumne River that are only just beginning to become visible. At the beginning of July, the river was still running close to flood level, at 9,000 cfs, although irrigation canals were taking some of the water. In the last week, the flow dropped from around 7,000 cfs to around 1,500 cfs. Consider this: 1,500 cfs is about a seventh of flood level, where the river stayed for six months, but is about seven times the average flow of the river at this time of year!

After five years of horrific drought, the river channel was in trouble. Without the flushing action of at least a moderate flood, silt had covered many potential nesting sites for salmon and other fish, and invasive hyacinth threatened to choke the channel (the hyacinth crowds out other life and prevents light from penetrating the water; in some places the river was covered entirely by the floating mats).

As the river channel starts to emerge from the floodwaters, we can see that trees and willow thickets have been swept away from some areas, leaving a floodplain of barren river cobbles (above). The hyacinth is gone (although I bet seeds are hiding in the soils along the river). In other areas, the floodplain is a tangled mass of trunks, branches and root balls. 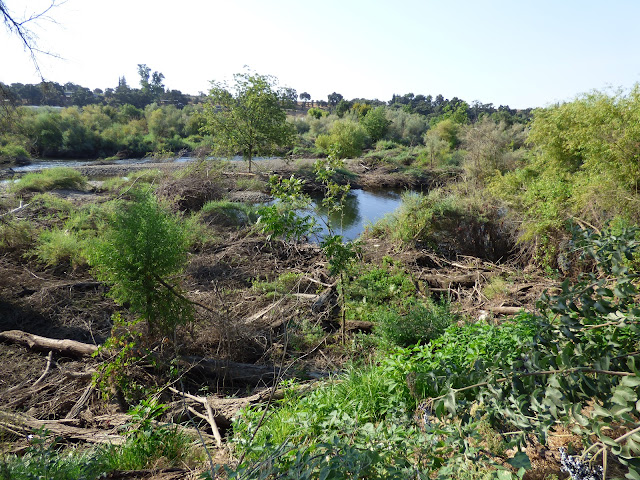 The flood took away a lot of habitat for the wide variety of animals that normally live on the floodplain, and took it for a long time (I'm wondering if homeowners on the bluff above had problems this year with raccoons and the like). It will be interesting to see how and when they come back. 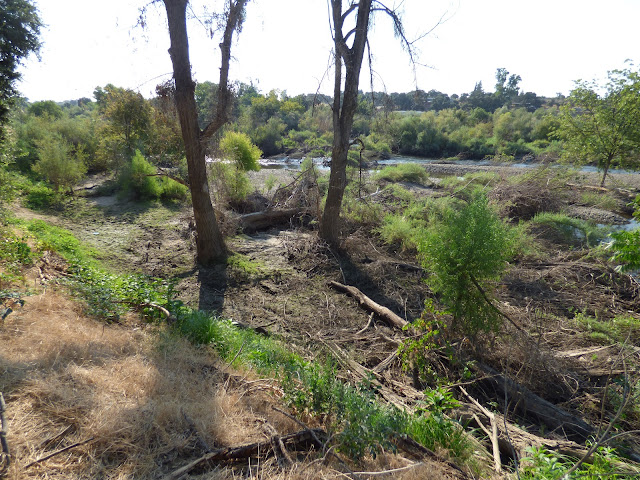 For farmers and anyone who uses water, the results are spectacular. Compare where California's major reservoirs were in January of 2015 during the height of the drought to where they are today. It's almost like we have an embarrassment of riches, but not really... 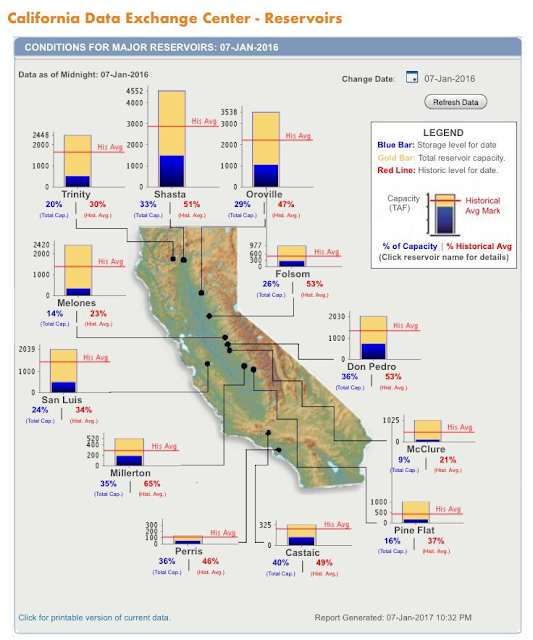 There is one aspect of the drought that cannot be shown on these maps, but which will affect Californians for decades. It's the groundwater. During the drought when surface water was not available, agricultural interests went underground to meet their needs. Paradoxically, almonds became a hot crop, and despite the dry conditions, tens of thousands of acres were planted with the water-hungry trees, and the orchards were almost exclusively irrigated from new wells. After a number of years without subsidence, some areas of the Central Valley began to sink again as the water was pulled out.

The high river flows will contribution a little to the recharge of the groundwater reservoir, but for the most part the water is irreplaceable, and we went through a lot of it. It's analogous to living off of a savings account without making any deposits. In the long run it is unsustainable.
The problem now, of course, is trying to plan for the future health of our groundwater basins, but with the end of the drought people are thinking of other things. There are important decisions that need to be made about the future use of our groundwater resources, and when citizens aren't paying attention, the decisions end up being made by those who stand to profit from the use of the water. They won't be acting for the common good.

Looking from January to the present on those historic levels, I cab see where your concerns are highly justified. To those not thinking long term or in groundwater reserves this does look like a boon and I truthfully would have thought only in the positive myself. That's why these articles you write are so VERY, VERY important. Also why I so appreciate them. Who controls the groundwater issue? Is this a State Water, county, or city issue. Who do we keep an "eye" on for actions or votes to speak up at?

For most of time, groundwater was only controlled by private landowners, and maybe county governments. The state has finally passed a framework for groundwater basin planning that is only now being implemented.

Here's a link to the state water board:
http://www.water.ca.gov/groundwater/

Yes, I love the sign. The elevation at that spot is about 100 feet, so if the sign is accurate, the river is 50 below sea level!