Accretionary Wedge #55: Blood on the Rocks, and Bad Karma on the Plateau 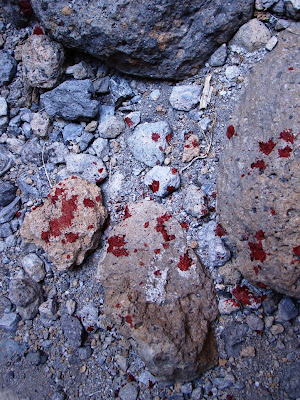 This month's Accretionary Wedge is hosted by Maitri at her Vatulblog, and it concerns our injuries incurred in the field: "Show me your injuries! ... You don’t have to be a geologist to play; simply having been injured by a rock or while doing something geological is sufficient. I will put the entries together and post them here as well as at the AW site at the beginning of March. The winner (one with the most spectacular wound or story) gets their choice of two bandage tins from this website mailed to them."

Actually, in twenty-five years of leading field trips, I have been remarkably (some would say eerily) free of serious injuries. Of course, by simply saying this I am bringing on the threat of geo-karma, and I will no doubt get bit or fall down a steep slope on my next trip. On the other hand, I have taken somewhere around 1,500 students on multi-day field trips, and some of them have managed to inflict a bit of self damage. Luckily, only a few required a trip to the emergency room, including a split-open chin, and a hairline fracture of a wrist caused when someone caught their fingers in a van door and wrenched an arm trying to pull them out.

The chin involved stitches after a fall on some rhyolite boulders in the Mojave Desert. From my point of view, it was my discovery of the accident site that was intriguing. I was trailing behind the rest of the crew in a deep cleft in the rocks, and I noticed the blood on the rocks (see the picture above). I stopped, looked around, looked up. In my ignorance, I assumed an owl had made short work of some rodent that night and was a sloppy eater. I continued on down the trail until some of the students came back and let me know we needed to make a stop in the emergency room in Needles, California.


The most famous injury during my time at the college was not quite so serious, a turned ankle, but it set in motion events later that day that have since become legend in our department. It involved rattlesnakes, and a suicidal deer (I originally blogged this story in 2008).
The rattlesnakes were simply an omen for the day. I and my students had set out on a cross-country trek to look for Ancestral Pueblo cliff-dwellings in eastern Utah. I stopped a moment and heard under my feet that buzzing sound that field workers don't usually like to hear: a rattlesnake. Only it seemed like it was in stereo. I looked down and saw not one, and not two, but three rattlers between my legs. I should have known right then to cancel the day and just go home, as I jumped through the air in some random and probably poorly chosen direction. No bites, but a very high heart rate for awhile....


Meanwhile, a deer had decided to cross the highway near Blanding and Monticello. That was still four hours in the future, though.


One of my students (who shall remain nameless for the moment) walked into the wilds, lacking water, companions, and common sense. He wandered off the mesa, climbing down a 4oo foot cliff, and climbing onto the adjacent mesa. He hadn't heard anyone for several hours and finally realized he was lost, and was long overdue at the vans. He tripped and fell, wrenching his ankle badly. Back in the parking area, concern was growing and search parties were organized. Finally, two hours later, as we prepared to contact the local Search and Rescue, our lost student stumbled out of the pinyon forest, having heard the honking of horns. We were now two hours behind schedule. We set out on the highway, headed to Blanding and Mesa Verde. And a few minutes after that, a deer, hidden completely by a concrete embankment, chose that moment to cross the busy highway.


We should have passed the embankment along the highway two hours previously, but our student  had been lost. And so we were selected, involuntarily, to introduce the deer to the hereafter. And the front of our van would never again be the same. We were, in fact, alive only because of the expert emergency driving skills of our professional volunteer, who managed not to turn us headlong into the big truck in the opposite lane as the collision occurred.
That's geo-karma...
A final note:
This wedge entry and others like it are a light-hearted look at what turned out to be fairly minor injuries. Such injuries have a potential to become major injuries in the isolation of the field, and major injuries have the possibility of becoming life-ending situations. There is no getting around the necessity of being as safe as possible when conducting field work. I can think of no situation worse than having a student die while under my supervision.  Someone passed away during a recent conference (from a long-term medical condition) we sponsored in an isolated mountain location. The staff at the conference center and our volunteers acted professionally and quickly, but nothing could be done. It was tragic beyond words.
If you are responsible for the students or fellow researchers, hold them to the highest standards of safety, and always have first aid kits available, and the training to use them. Don't allow a moment of fun taking a bit of a chance turn into tragedy.
Posted by Garry Hayes at 1:55 PM

"I can think of no situation worse than having a student die while under my supervision." I couldn't agree more. My experience on field trips is largely with middle- and high-schoolers. I've been incredibly lucky (and I hope preemptive) in terms of clearly explaining safety issues, and not having to deal with anything requiring more than a squirt of antiseptic and a band-aid. But kids of this age have not registered their own mortality yet, and have driven me into heart attack territory more than once.

I don't go into the field much because of asthma, and I've had three really bad attacks in the field. Generally I was coughing so hard I couldn't keep the rescue inhaler medicine in my lungs long enough to work. All three times I turned blue. Scared the hell out of all of us.