The Other California: A Chance to See a Unique Piece of our State, our local Galapagos Island

I work with some pretty incredible people. Modesto may be not be the most exciting place to live, a Central Valley town with a depressed economy and limited opportunities, but the professors and teachers I work with are fighting to provide our students a chance to reach their dreams (and even to give them an idea of what to dream about). Many of our faculty are doing world class research, and we have nationally known poets and writers. They could live anywhere, but they've chosen to live here and work to build their community

It's also important to know that despite our limited resources, our administration recognizes the value of field experience not just in geology, but also biology, archaeology, and anthropology. Students who have pursued their education at our school have had opportunities to explore far-flung parts of our world, including Scotland, Australia, New Zealand, Italy, Switzerland, Canada, Baja California, and all eleven western states. It is a challenge to put such trips together, and they can be expensive, but the experience and knowledge gained is priceless. 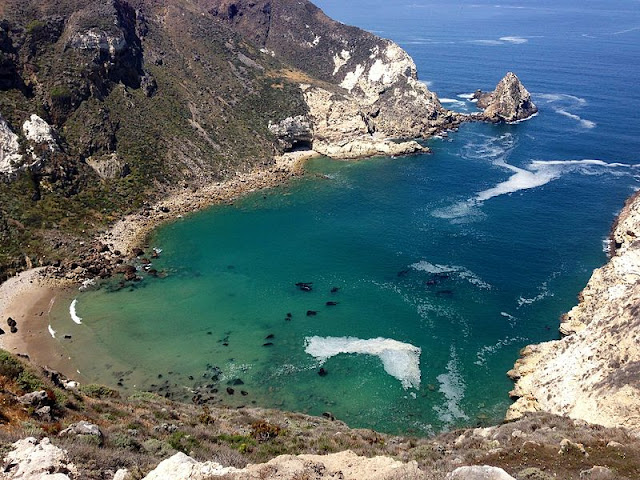 Which brings us to today's topic. Early on in my blogging career (in the Pre-Pleistocene year of 2008), I had a regular feature called the "Other California" which describes those parts of our fair state that don't always show up on the postcards and travel brochures, but which display incredible geology and natural history. Our state is rich with landscapes and species that are found nowhere else. And so today I want to let you know about a marvelous opportunity to see one of our most unique landscapes, the Channel Islands.

The Channel Islands are the oceanic extension of the Transverse Ranges in Southern California. Structually, they've had a strange history that includes being a part of the Earth's crust that has rotated more than 90 degrees from their original orientation. They have been compressed and faulted, and isolated from the mainland for several million years. That means that fauna and flora have been isolated as well, and they have undergone selective pressure in order to survive. There are more endemic species here than anywhere else in the state. There is a species of bird, the Island Scrub Jay, that is found nowhere else, as well as a canine, the Santa Cruz Island Fox. As recently as 10,000 years ago there was a race of Pygmy Mammoths who survived on the islands for some time after their relatives had died out on the mainland. And...humans lived with and occasionally hunted them! The islands have a rich archaeological heritage of the Chumash people that goes back thousands of years.

You have a chance to explore Santa Cruz Island with an archaeologist, Professor Susan Kerr, and a biologist, Professor Teri Curtis through the auspices of Modesto Junior College. The class is Archaeological and Biological Field Studies of the Channel Islands (Anthropology 155 and Biology 155 for a total of 2 semester units) and it will take place on August 7-12 on Santa Cruz Island. Cost includes registration fees for the class and $480 for housing, transportation, meals and activities, including kayaking and hiking. There is an information meeting on May 19th for those of you who live in the Modesto region, at 6 PM in Science Community Center room 212 on the west campus of MJC. If you can't make it to the meeting, contact Susan Kerr (kerrs -at- yosemite.edu) or Teri Curtis (curtist -at- yosemite.edu). I hope you can join them!
Posted by Garry Hayes at 9:55 PM

Think I might just have to escape the Valley again =0)

Think I might just have to escape the Valley again =0)