If You Have to be Stuck Somewhere, It Might As Well Be Here 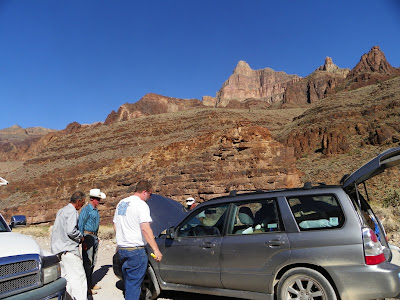 I mentioned in yesterday's post about the engine worship ritual method of fixing broken down cars. I didn't realize that Mrs. Geotripper was playing the anthropologist yesterday and taking pictures. As some of you may know, the Engine Ritual is a highly structured approach to appealing to the car gods to make a car run again. All the men in the group (this is a religious issue, not a sexist issue; I'm told by Mrs. Geotripper that women look for the trouble-shooting section of the car manual) must gather around the open hood of the car. They form a semi-circle with the high priest (the elder)in the center, and the car's owner closest to the door on the driver's side (only the driver is allowed to turn the key). Each in turn murmurs the chant to the gods, which starts out as "Did you try...", followed by leaning over into the engine and jiggling something. The gods are rather easily insulted, so the ritual rarely works, but when you are stuck anything is worth a try.

This is a largely western European tradition, but I was on reservation land, so it turns out that after the others gave up and left, I was paid a visit by a mysterious Native American shaman (the truck he drove was labeled "ranger". He considered me with a philosophical stare (it was 5 PM and he was considering whether this tourist was going to cause him to miss dinner). He looked at the engine and said (in that mysterious spiritual connection voice) "Did you try unlocking the transmission with the little switch next to the gearshift?". Voila! It unlocked the transmission! But the car still wouldn't start, but at least we had made progress.

In the end, we solved the problem in the age old method familiar to all who work with technology: "Is the broken thing plugged in?". In this case, I said "Let's try the jumper cables" just to see what would happen. Somehow the supplication and desperation in my voice appeased the car gods and the car started.

So we were delayed a day, and my car has a new battery this morning (I don't get it, the car had the original battery and only 114k on the odometer). We are moving once again! In the meantime, Mrs. Geotripper snapped a few other shots while we were deep in the Grand Canyon. Enjoy! 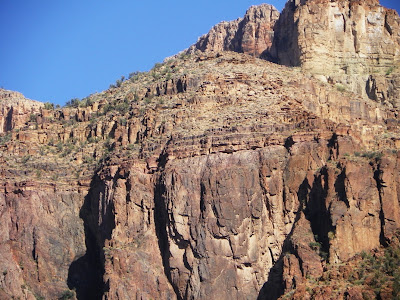 Above is a great shot of the Great Unconformity (across the middle of the picture). The rock in the lower half is the 1.7 billion year old granite and gneiss that was once a mountain range but was reduced to a plain over hundreds of millions of years. The horizontal layers of the Tapeats sandstone can be seen immediately above. The Redwall limestone forms the higher cliffs. 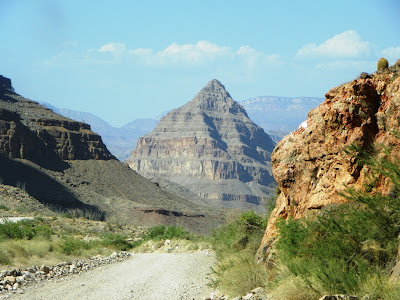 Diamond Peak is a large block caught between the Hurricane and Three Springs faults. 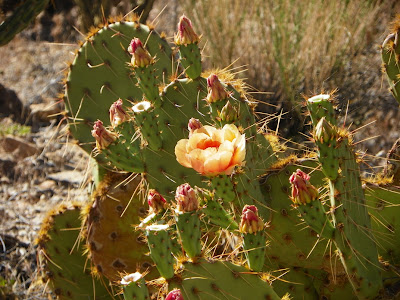 And a Beavertail Cactus bloom...

On to more adventures! Will post when I can!
Posted by Garry Hayes at 9:46 AM

My friends and I have a word for such "mindless talk by men about their vehicle" ... quadrivel. It originated in a game of fictionary (primitive form of Balderdash) and we have used it ever since. It was a term sorely needed! :)

congratulations on getting back on the road.

Nice. I think your wife is spot on. My first instinct is to go for the manual. Perhaps because I am willing to merrily announce that I know just about nothing about cars, and my fervent goals are always for it to not blow up or catch on fire (and then blow up). =)

Glad you got it solved and are in such a great place!!