No, It's Not Erupting...and Probably Won't Any Time Soon: Mt. McLoughlin in the Oregon Cascades 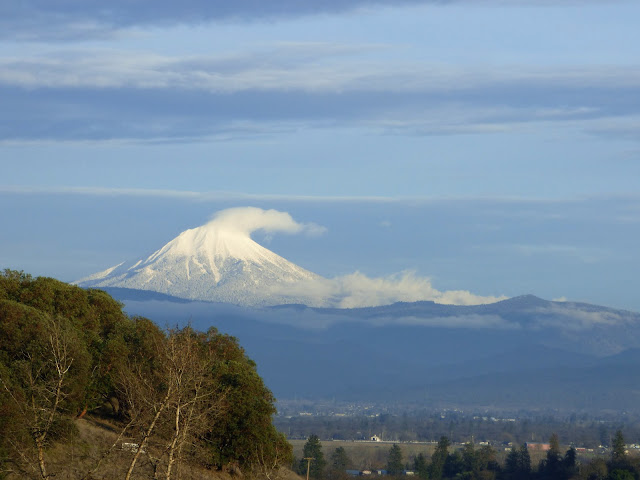 There is a grand and momentary sight to be had if you are driving south on Interstate 5 about seven or eight miles north of Medford, Oregon. If the weather is clear when you round the last bend before the Rogue Valley, a beautifully symmetrical volcano comes into view. It is called Mt. McLoughlin. It's really quite dangerous for geologists to drive on this highway because of our tendency to swerve and hit the brakes the moment we see the volcano and start scrabbling around trying to find the camera. I get honked at a lot by angry truckdrivers all the time around that moment.

Luckily for me, Mrs. Geotripper was riding shotgun today, and I knew the corner was coming up. She got the camera ready ahead of time and was able to snap a couple of pictures. With the news of volcanoes erupting around the world at the moment (check out Mt. Etna in Italy and Krakatoa in Indonesia, for instance), it's not surprising to consider for a moment that McLoughlin looks like it's erupting. What we are seeing here is clouds forming as warmer air masses are blown upslope into colder air around the summit. The cooler temperatures cause the humidity to jump and condensation forms the clouds around the volcano summit. Sometimes the clouds are more lens-shaped (lenticular), giving rise to legends of UFO landings and aliens. 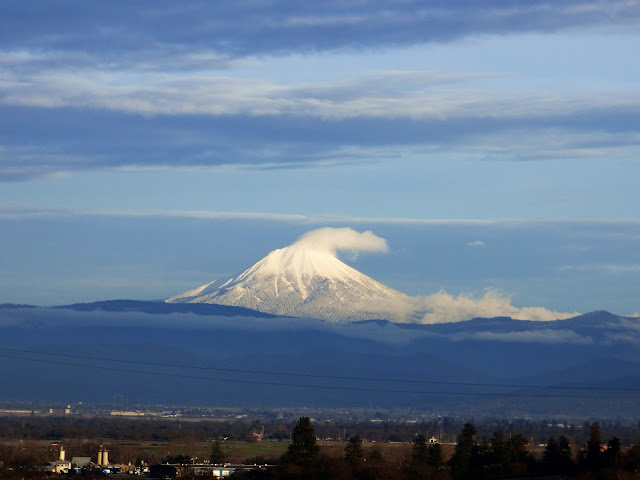 Mt. McLoughlin is 9,495 feet (2894 meters) in elevation and can best be described as a composite cone, as it is in part a basaltic shield with a prominent summit cinder cone and andesite flows. It has not erupted in the last 20,000-30.000 years and thus appears to be low on the list of recognized hazardous volcanoes. From some angles McLoughlin is a deceptively symmetrical cone. The summit has been deeply carved by glaciers. 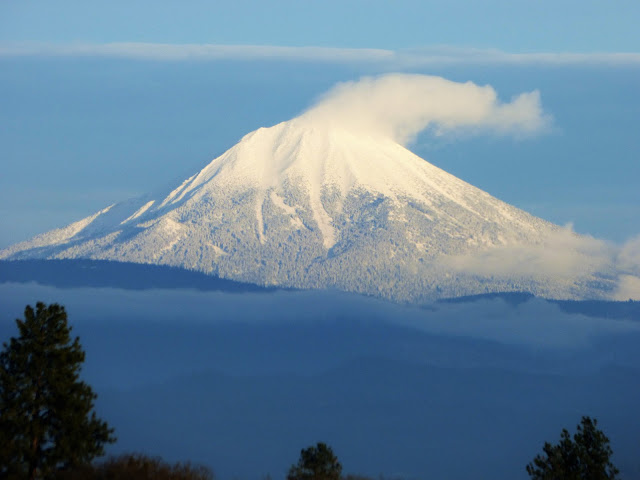 Mt. McLoughlin is soon lost among the trees, buildings, and powerlines of Medford. It's not a particularly worrisome volcano although it is capable of wreaking havoc if the unlikely ever happens. But if you keep driving south on I-5, there are highway signs pointing to a volcano, or more correctly, a caldera, that is not visible at all from the freeway. It's Crater Lake, and it is a much more dangerous volcanic complex than McLoughlin. It erupted catastrophically only 7,000 years ago. And farther south still is Mt. Shasta. It looms menacingly over Northern California, and we'll have a short look at it in our next post.

POSTSCRIPT: I found out I had some aerial shots of McLoughlin from a flight I took in 2005. Here's one of the best. We were east of the volcano looking west. The glacial cirques are clearly visible... 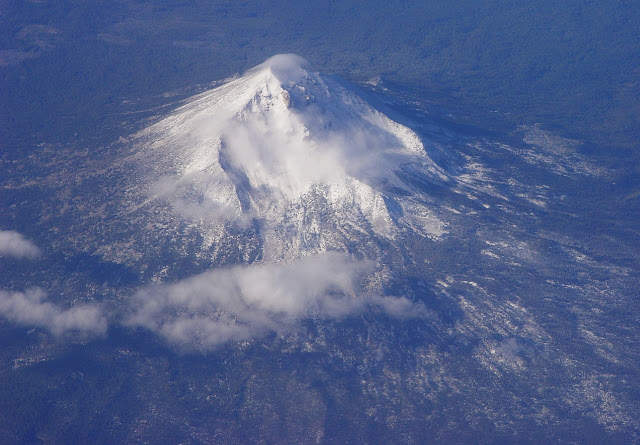