The Sliding Stones of (Not) Racetrack Playa, and One of the Less Important Consequences of Climate Change


There are lots of mystery spots in the world. My garage is one of them. Over the decades it has collected the flotsam and jetsam of our lives, and it hasn't happened in any kind of organized manner. The last few weeks of this summer has seen one of our most ambitious attempts yet to clear out the debris and preserve the important records of our lives. I even had a yard sale! There have been lots of precious little discoveries, and one of them was the snapshot above, of another mystery spot in the world. It was taken in 1983 or 1984 when I was attending grad school at the University of Nevada, Reno.

I know that for some of you, seeing the tracks across the playa surface can only mean one place on the planet: Racetrack Playa in Death Valley National Park. For years and years geologists and others noted the strange trackways made by pebbles and boulders and pondered how in the world they happened. There have been the "boring" scientific hypotheses involving wind, water and ice, and the more exotic fringe ideas like weird magnetic currents and aliens. I took the picture, but I've never been to Racetrack Playa and therefore am not guilty of tampering with the stones (the National Park Service and geologists take a very dim view of such things). It turns out the strange sliding stones have been found in other places. I know of at least three of them.
There seem to be at least three important factors to get sliding stones: a flat playa surface, a nearby source of rocks, and the possibility of freezing windy conditions. The Racetrack has the Grandstand, an island of rock in the midst of the playa and a high enough altitude to get freezing conditions once in awhile. Bonnie Claire Playa in the vicinity of Death Valley has an active alluvial fan and similar elevation. And Highway 50 in the Carson Sink of Nevada has Highway 50. The highway has to cross the playa and to prevent flooding it has been built on a roadway of stones brought in from elsewhere. That's where I was when I snapped the opening picture of this post. Some of the stones escaped from the highway and set off across the playa surface. My fellow students were trying to suggest an origin of the trackways as being the result of high winds and too many drunk geologists being blown across the dry lake surface.
Some hypotheses involved only extreme winds blowing over a very slick muddy playa surface. Some experiments suggested that pebbles could be set in motion by hurricane force winds, but wind by itself cannot explain the fact that some of the moving stones weigh hundreds of pounds. The fact that some rock trails run parallel to each other suggest that they were locked together. A sheet of ice covering the playa provides a possible explanation. It the ice were to break up into smaller sheets, the ice could presumably act as a sail. Most observers figured that high winds were still a necessity.
In 2013 cameras caught the movement of the stones (see it here). Ice was indeed involved, but hurricane force winds weren't required. The sheets of ice were pushing the rocks around in winds as little as 10 miles per hour. It's not clear if this process can explain the movement of the larger boulders.

The greatest irony of the mystery of the sliding stones is that they might soon no longer move at all. As the climate changes and warms over the coming decades, the required conditions, particularly that of ice formation, will no longer exist. 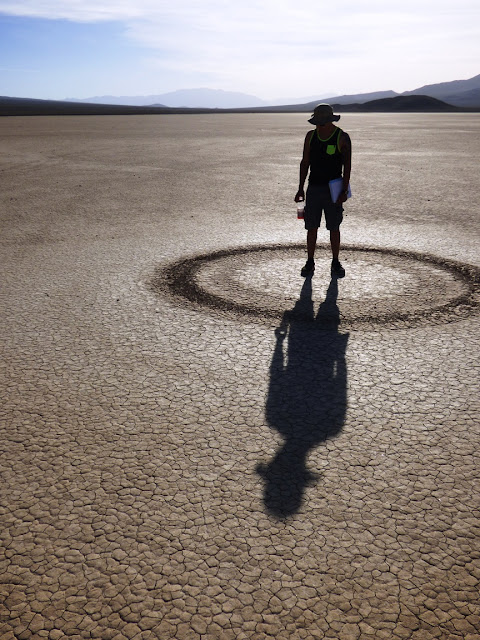 Here is one more mystery for you. When we last visited Bonnie Claire Playa, we found this circular structure. I welcome any explanation you can provide for this one! UFOs need not apply, even though Area 51 is only a few hundred miles away. You can see some more pictures of the strange feature in my post here: https://geotripper.blogspot.com/2015/02/a-little-mystery-to-accompany-moving.html

Learn more about the research on the sliding stones of Racetrack Playa here:
https://scripps.ucsd.edu/news/mystery-solved-sailing-stones-death-valley-seen-action-first-time
Posted by Garry Hayes at 10:11 PM