Earth as Inspiration: It's Coyote and Roadrunner! (Except that it's not a Coyote, and the bird wasn't a Roadrunner) 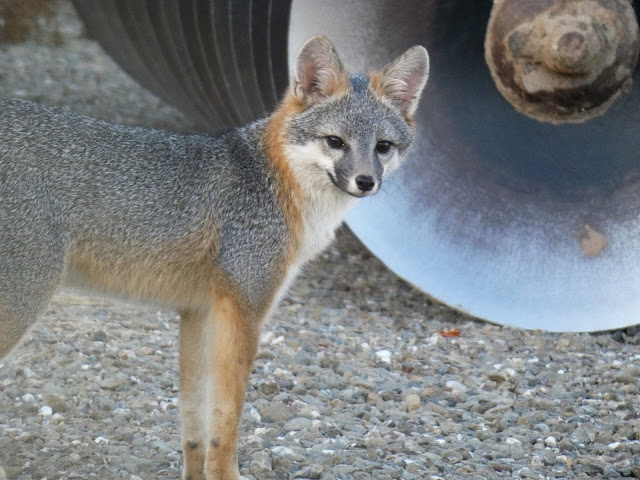 It's Earth Science Week, and the theme this year is Earth as Inspiration. It may seem strange that I would open this blog with a picture of cute furry creature when we should be discussing the Earth, but bear with me. I find the inspiration wherever I can!

I live in the midst of California's Great Valley, but to many people it isn't all that "great". Modesto regularly ends up as 48th or 49th on the lists of the "best places to live" in the U.S. We are in a perpetual depression, with unemployment levels that are around twice the national average, and the median household income lags badly behind the national average. Pretty dismal, many things considered, but not all. There are some real treasures to be found among the dusty fields. And those treasures are related to the earth sciences.

The Great Valley originated as a forearc basin between the vast subduction zone that once existed offshore of California during the age of the dinosaurs (the Mesozoic Era), and the chain of volcanoes that erupted miles above the magma chambers that would one day cool to become the granitic rocks of the Sierra Nevada. For most of its history the valley was a shallow sea, home to huge swimming reptiles during the age of dinosaurs, and gigantic sharks and a variety of whales, dolphins and seals during the Cenozoic Era that followed. It was only a few million years ago that the valley floor rose above sea level to become the grassy savanna that it was prior to the arrival of European settlers and farmers. The valley was populated by a bewildering array of strange mammals like mammoths, mastodons, giant ground sloths, gigantic Short-faced Bears, Saber-tooth Cats, Dire Wolves, horses, and camels. Many of these animals went extinct around 12,000 years ago, but even 300 years ago there were herds of Tule Elk, deer, Pronghorn, Grizzly Bears, Wolves, and Mountain Lions. And there were birds. Millions and millions of migratory birds who made the valley wetlands their winter home.

Eventually 95% of the valley was co-opted by agricultural development, and most of the natural primeval landscape was lost. But fragments remain here and there. There are still prairies around the margins of the valley that were simply grazed and not plowed. There were river floodplains that flooded too often to be developed as farmlands. And some animals adapted to the new state of affairs and have thrived in human landscapes.

That is where my inspiration came from this evening. I was out taking my normal walk for exercise and bird-searching when I came across a wild chicken. Well, not really a wild chicken, but apparently an escapee from the campus chicken coop (we have a big agriculture unit at our school). And it looked nervous. A moment later I saw why: it was being stalked by a Gray Fox (Urocyon cinereoargenteus). I've seen Red Foxes on the campus before; they're an introduced species. But this was the first time I got a clear view of the native Gray Fox (I saw one in the dark a few weeks ago). 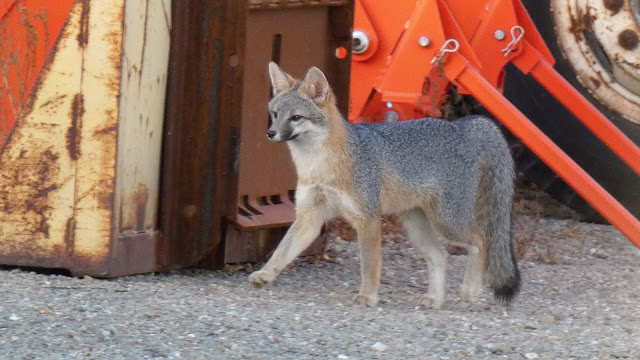 The fox was very intent on its quarry and didn't notice me at first. I was able to get a few shots of it before it retreated into the bushes behind the farm machinery. The chicken also headed into the bushes, relieved that the chase was at least temporarily put on hold. But the whole episode reminded me of a great thing happening on our campus. 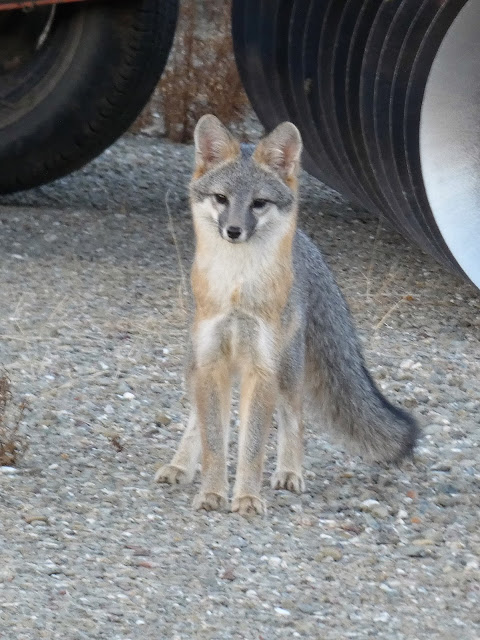 We are building a small version of our valley's native ecosystem on the vacant space north of our Great Valley Museum. It will be called the Great Valley Outdoor Nature Lab, and it will include several acres of native vegetation, a vernal pool, and some of the rocks characteristic of the margins of our valley. It might not be large enough to serve as a home base for the fox, but it will attract the native birds, and maybe some of the native amphibians and reptiles. The work is well underway, and by January we should have a mostly operational outdoor lab. Local school children, many of whom almost never have a chance to leave the city limits, will have an opportunity to see the natural history museum exhibits, and then step outside to see the native trees and vegetation, and perhaps even some native birds, ground squirrels or lizards, and if they are really lucky, a Gray Fox. 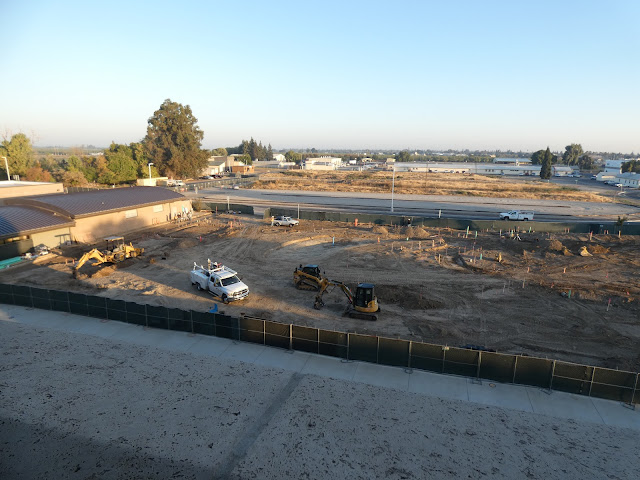