Pele is a Capricious Goddess...Part Three, a Precious Gift from a Mysterious Woman


I've been celebrating my impending return to the Hawaiian Islands by revising and expanded a few posts I did in 2009 about the volcano goddess Pele, and my experiences with the ongoing eruption of Kilauea.  My third chance to see Pele's beauty came about in 2006 as a result of a family reunion that included a cruise of four of the Hawaiian islands. We arrived a few days early on the off-chance that there would be something to see on the Pu'u O'o flow that continued to erupt over the years. It had been a mostly quiet year, with lava flowing through tubes for seven miles before spilling into the sea.

I was not really expecting to see much. The problem is that the coastal cliffs around a lava entry are dangerously unstable. As the lava hits the water, it shatters and forms thick layers of unstable cinders while being covered by lava flows. Every so often, the cinders slide downward, and the lava bench suddenly collapses into the sea. A number of people have been killed because they were standing on the benches when they collapsed. So, the national park service had erected a rope barrier to keep people from the most dangerous areas. Unfortunately, there was no view possible of the lava itself, according to reports. Just the bright orange glow of the steam rising from the turmoil below the coastal cliff.

Still, it was worth a try. I told my wife and son and nephews that I would hike out, be safe, look at the glow of the invisible lava, and be back to the hotel by 9 PM or so. I took water, a flashlight, extra batteries, and my brand-new camera that I had bought that morning, and was just beginning to learn to use. 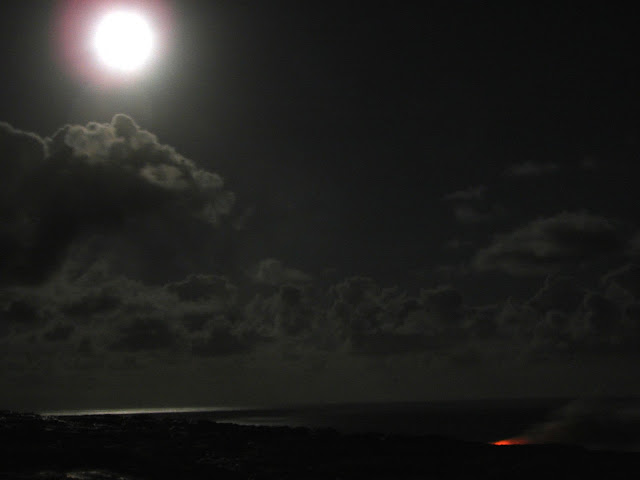 The hike was longer than I expected. There were so many people parked at the end of Chain of Craters Road that I literally had to walk an extra mile just to reach the trailhead. The flows were entering the sea two miles away, over trail-less pahoehoe flows. The sun set way too quickly and for route-finding I was down to my flashlight, and flashing beacons set up every quarter mile or so. Plenty of people were walking back with their flashlights, so the route was clearly evident. Most of the people I talked to expressed disappointment. Nothing to see but glowing steam. There were a few idiots who crossed the barriers, but even they couldn't get close enough to see anything. I was getting very tired. Pahoehoe may be smooth, but is still very uneven, and it only takes a single misstep to twist or break an ankle. I made it to the rope barrier, and could now see the glow and the steam. It was actually an awe-inspiring moment, as the moon had risen and was reflecting off the ocean behind the steam plumes. But no lava.

I realized that it had become very lonely. The only others about were four people in a party, and a single flashlight off in the distance headed back to the road. I hung with the four people and a lady appeared out of the darkness (it only occurred to me later that she didn't have a flashlight). She hinted that we might want to walk to the far eastern end of the rope barrier, another quarter mile away. And then she disappeared into the darkness again. I looked at my watch. Already 9:00 PM. I was going to be way overdue. But, what was out there? What was the lady talking about?

Curiosity got the best of me, and I set off for the far end of the barrier. After 20 minutes or so, I surmounted a small cliff and looked down, and saw one of the most beautiful sights I have ever seen. 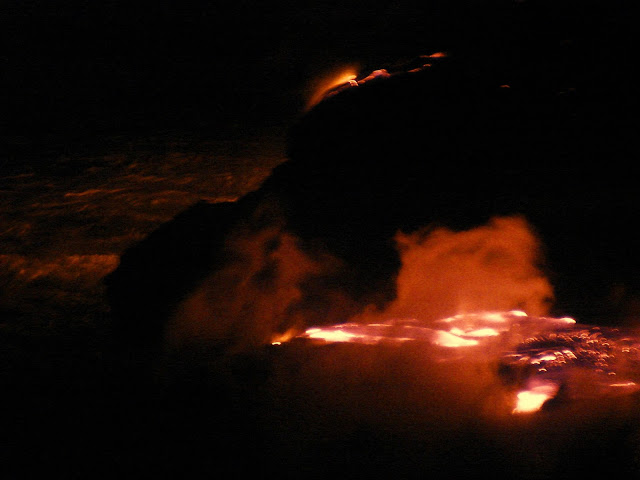 I was standing at the top of a thirty-foot cliff that marked the edge of the latest bench collapse (The safe edge, if you are wondering). No more than 30 minutes earlier, a lava tube had broken through, and lava was starting to pour across the bench to the 15-foot high beach cliff a mere hundred yards away. I stood entranced as the lava flowed like syrup across the slope below me. The finger of lava flowed slowly to the edge of the cliff and spilled over into the surf. 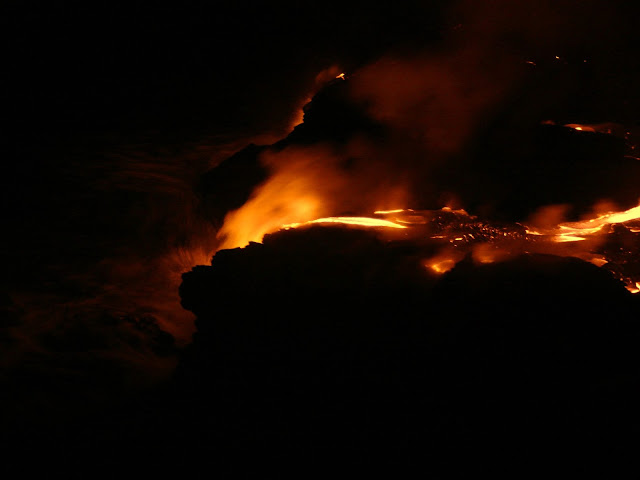 The five of us were the only people out of hundreds of visitors that day who saw the glorious scene before us. Except that mysterious woman...Needless to say, I was in a heap o' trouble when I walked into the hotel lobby after midnight. But I can never forget the incredible gift of that magical sight of lava pouring into the sea. And that mysterious woman in the darkness.

PS: I found a USGS photograph of the coast taken on the same day I was there. The parking was in the distant brown area, the black is recent lava flows, and the gray foreground area is the active lava delta. The rope barrier is hard to see, but it was uphill from the lava delta. The new lava breakout that I saw happened at the bottom of the picture at the edge of the gray delta. 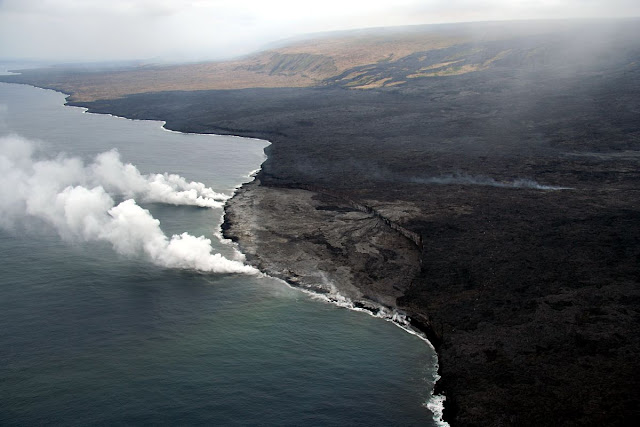 PSS: I did manage to figure out the video function on the new camera, but of course I should have taken more.