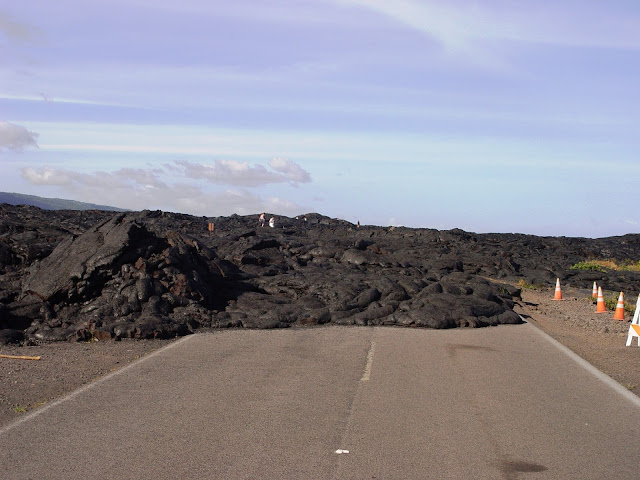 Continuing the story from the previous post, I had a second chance to see a volcano in action in 2004. I was the newly elected president of the Far West Section of the National Association of Geoscience Teachers, and for my first conference, I had persuaded someone to sponsor a meeting in Hilo, Hawaii. The volcano on the Big Island at Pu'u O'o had continued to be active over the previous two years and was still going strong as the date of the conference approached. Lava was still traveling from the cinder cone on the east rift zone of Kilauea and traveling through lava tubes to the ocean. I was thrilled that a bunch of fellow teachers would be able to see an active lava flow! 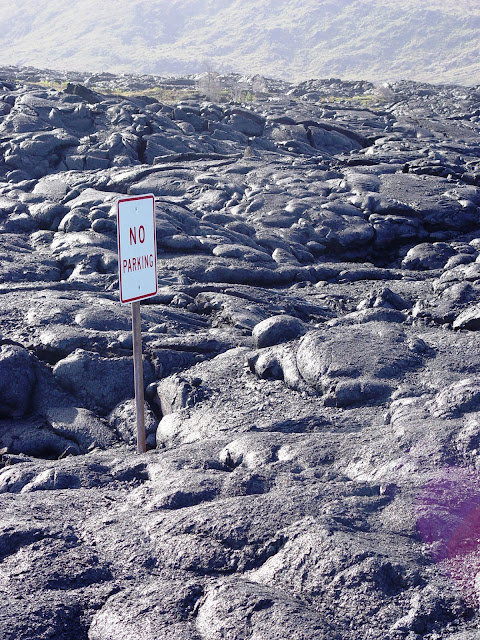 Except (and there always seems to be some kind of terrible "except" to stories like this)...as the final days approached, the flow activity started to wane. The HVO reported that blockages had started to occur in the upper reaches of the lava tubes that were feeding the ocean entries, and the lava flows were slowing considerably, declining to almost nothing. Every morning I went online to check on the latest HVO reports, and got a sinking feeling. 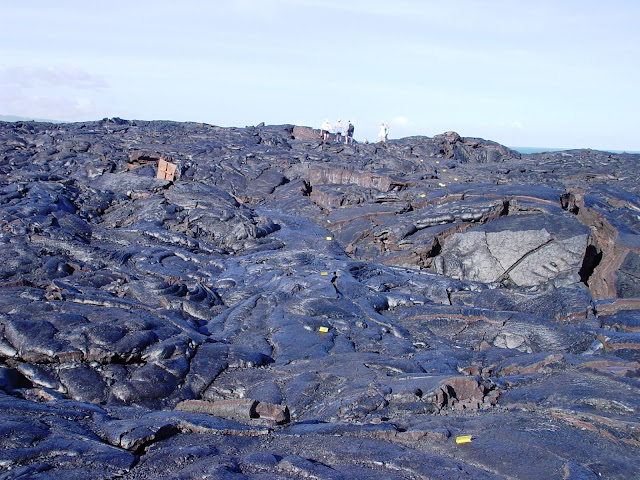 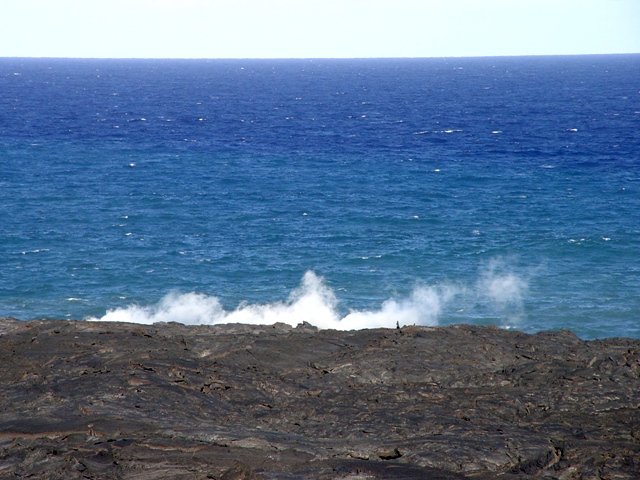 The next day, I hiked out to the flow as fast as I could, and saw...well, I saw what you can see in the picture above: steam from a recently ended flow. I searched desperately for any kind of small break out, any sign of active lava, but all there was was steam rising from cracks here and there. All I got for my trouble was a badly scraped arm and palm when I slipped and fell onto a day-old lava flow. I was not aware until that day that fresh basalt flows are usually covered with a thin veneer of obsidian (volcanic glass) that gives the lava flow a silvery metallic appearance. The glass starts to break up right away, forming jagged shards that are like small razors lying about the surface. 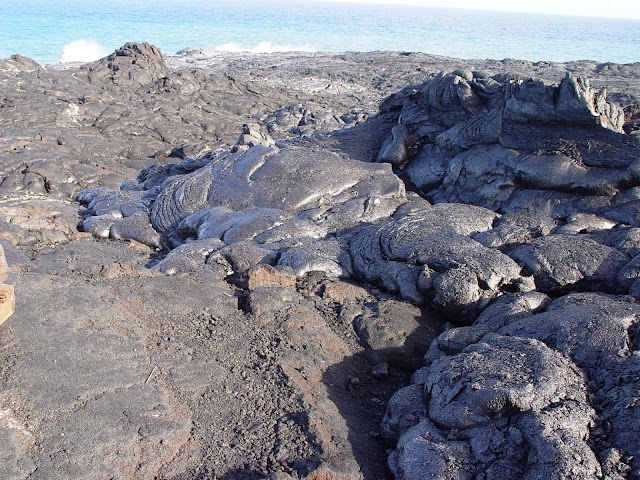 Still, there is great beauty in new rock. The patterns in the pahoehoe lava surfaces are endlessly fascinating, and there is a grandeur in the barren surfaces of a day old lava flow. It is an absolutely sterile surface that has never before existed. A new beginning... 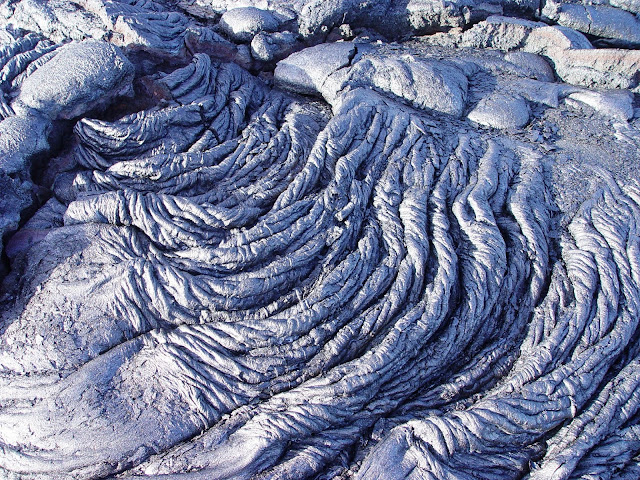 Lava flowing into seawater has a tendency to explode on contact, forming fine sand-sized particles. Kilauea had already destroyed one of the most cherished black sand beaches in Hawaii, but a new beach, however impermanent, had appeared to replace it. 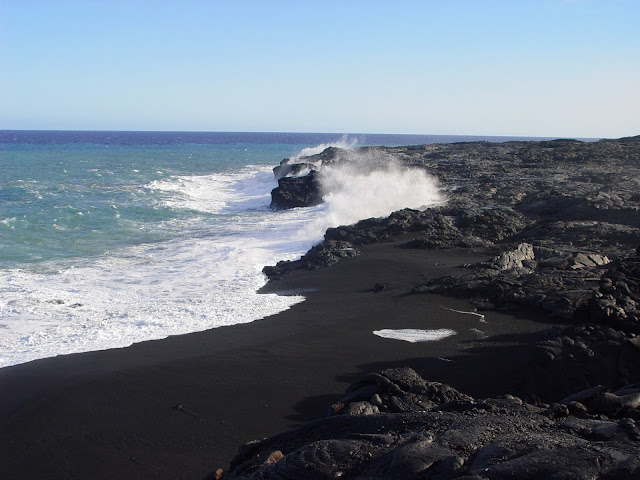 Pele had given the gift of new land on the island, but I was not privileged in this instance to see it happen. But patience is a virtue. It would be another two years before I made it to the islands, but it was worth the wait. That story will have to wait for the next post! 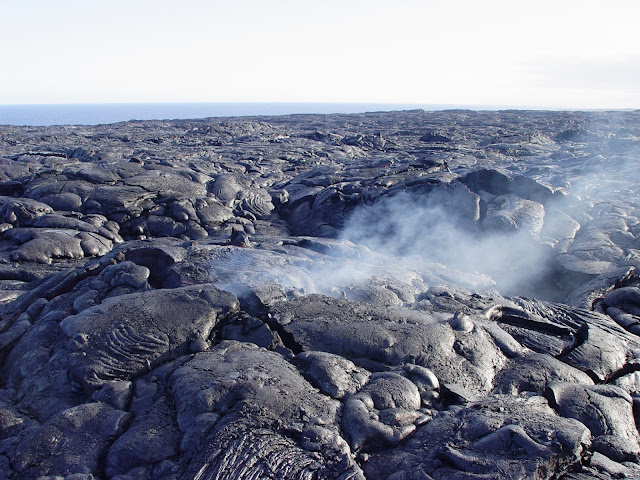 This is an expanded version of a 2009 blog post that preceded the first field studies course that I ever taught on the Hawaiian Islands. We're leaving in a week for the islands for our second-ever course, so I'm thinking volcanic subjects these days.
Posted by Garry Hayes at 10:22 PM